ONE of Mercury’s most prominent features has been given an Irish name to coincide with St Patrick’s Day.

The International Astronomical Union (IAU) approved of the proposal this week after an application was lodged by an Irish scientist four years ago. 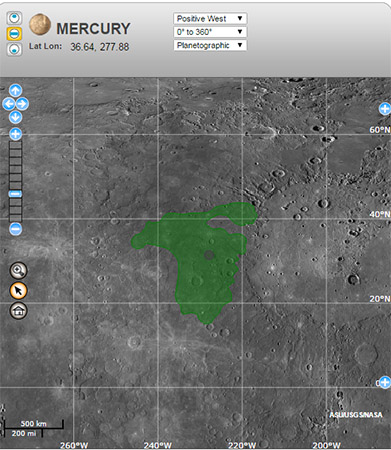 Dr Paul Byrne, a planetary scientist in the US, applied for a large lava plain on the surface of the planet to be named ‘Mearcair Planitia’.

Mearcair is the Irish word for Mercury, while Planitia is the Latin term for a plain.

Dr Byrne said he had emailed his old school in Co. Kildare to tell them the good news.

“To get this news in St Patrick’s week was absolutely brilliant,” he told the International Astronomical Union.

“I got a C3 in Irish in the Leaving Certificate. Maybe I have finally done right by my Irish teacher now because she put a lot of work into me.”

Mercury is the smallest planet in the Solar System and is the closest to our sun.

Temperatures on the surface of the planet regularly exceed 400° Celsius (750° Fahrenheit).

Mearcair Planitia is a flat volcanic area which was likely formed billions and billions of years ago.

It is located near to one of Mercury’s most famous features, the Caloris Planitia – one of the largest impact basins in the Solar System.

Caloris Planitia was only discovered in 1974 thanks to images taken by the Mariner 10 probe.

The newly named Mearcair Planitia was one of a number of landforms mapped for the first time by the Messenger probe more recently in 2013.

The IAU are responsible for the naming of everything from distant stars to newly-discovered dwarf planets.

The public are invited to submit ideas for unnamed terrestrial objects on the IAU's website.