A RECENTLY relaunched Irish pub has become the sole sponsor for the first GAA team to be founded at Coventry University.

Since the new GAA Ladies Football team was registered at the University in October, The Four Provinces in Chapelfield has signed up to support the women as they tackle their peers in the British Universities GAA league.

Friends Martin Ryan and Alex Ceairns took over the pub – known locally as The Four P’s – last June, a venue long considered to be within the heartland of Coventry’s Irish community.

Both had pulled pints there in their younger years and were confident they could bring it back to its former glory, while retaining their day jobs.

This week they told The Irish Post that things are going better than ever for the busy watering hole, with their Coventry University connection just one of many things they look forward to sharing with their customers this year.

“We have been involved with the Coventry University GAA Ladies Football team since October, when they came to us as they needed to find sponsorship,” Mr Ryan, who works as a maintenance fitter at Coventry’s University Hospital, said.

“They had set up the team a little late and had missed the window to register with the University, so we helped them with the money they needed to do that and then held a couple of fundraisers for them at the pub,” he explained.

“We also sponsored their transport and accommodation for their most recent tournament in Newcastle and held another fundraiser for the team,” he added.

Regarding the new connection for the pub, he said:  “It’s great for us to be sponsoring the team, but it’s also a great thing for the community here and for our customers too.

“Everybody loves the students, many of whom are county GAA players from home who have coincidentally found themselves at the same university in Britain and decided to set up a team.

“What’s even more exciting in that its actually the first GAA team of any sort to be registered at Coventry University, so a great development for the city and brilliant to see these students taking the initiative to set it up.” 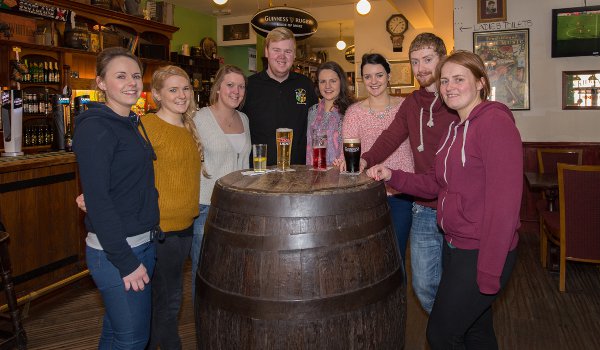 The GAA team, led by manager Shane Keogh, is doing well to date, Mr Ryan confirmed, and some of the players have even picked up part time work behind the bar at The Four P’s.

While in Newcastle earlier this month they did their sponsors and supporters proud by claiming victory in their matches and leaving the tournament as All Britain Division Two champions.

Their ambition is to reach Division 1 next season, but their more immediate goal is to win their next match, against Birmingham University - which takes place on Sunday, March 8 in Coventry.

“The team seems to be doing really well already, so we look forward to continuing our support and sponsorship and the many more tournaments and matches they will have coming up this year,” Mr Ryan said.

And the pub, which is run by General Manager Rory Ceairns – co-owner Alex’s brother, will have a number of celebrations of its own to add into the mix in 2015.

“This year is actually the 50th anniversary of the original opening of The Four P’s,” explained Mr Ryan.

“So we have lots of plans to celebrate that with the community and our customers over the course of the year,” he added.

“It’s going great since we took it over, we have lots of new faces as well as some who have known the pub for a lot longer, so there are plenty of things to celebrate this year.”