A NEW bust of Cristiano Ronaldo has led to ridicule, with football fans saying it looks more like Irish striker Niall Quinn.

The bronze sculpture of the Real Madrid and Portugal forward was unveiled at Madeira Airport on Wednesday at a ceremony to name the airport after the player.

Ronaldo was born in the city of Funchal on the island of Madeira, which is already home to a museum dedicated to the four-time Ballon d'Or winner.

The player was at the unveiling at the newly-titled Cristiano Ronaldo International Airport alongside Portugal’s president Rebelo de Sousa and Prime Minister Antonio Costa. 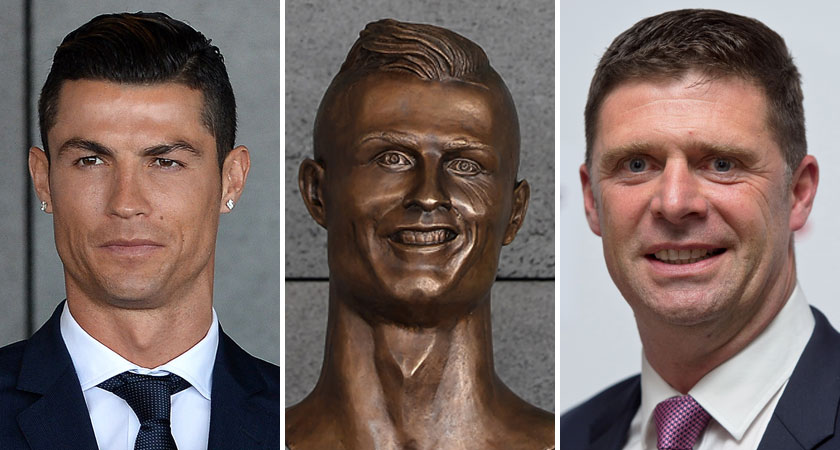 The former Manchester United player doesn’t seem to have much luck with effigies – a statue of the player erected in 2014 was last year vandalised with Lionel Messi graffiti, who plays for Madrid’s arch rivals Barcelona.

The new bust does bear an uncanny resemblance to former Arsenal, Manchester City and Sunderland striker Quinn, who made 92 appearances for Ireland.

The notoriously hubristic Ronaldo later tweeted that he was honoured to have the airport named after him, however social media users have been trolling the star over his bronze likeness.

When you send the statue guy a picture of Niall Quinn instead of Cristiano Ronaldo #Awkward ? pic.twitter.com/0VR8qPskVF

I honestly cannot get over how much Ronaldo's statue looks like Niall Quinn ???????? pic.twitter.com/C84G7CAWIi

#ThatMomentWhen You realise the Cristiano Ronaldo statue actually looks just like him. ?? pic.twitter.com/QH1XS2Vrlv

Damn! People are going in with the Ronaldo statue ? pic.twitter.com/7LTIynYn1w

For a very handsome man, Ronaldo has had some appalling luck with statue-makers pic.twitter.com/M74YEDng4c

What do you think? Is the bust more Niall Quinn than Cristiano Ronaldo?