CONCERNS have been raised about the deadly state of Britain’s building sites as contractors prepare to cash in on the industry’s emergence from recession.

With firms primed for a return to strong growth in 2014, unions, lawyers and campaigners have joined forces to warn of a possible upsurge in worker deaths.

They paint a worrying picture of a culture in the construction industry, one of the largest employers of Irish people in Britain, that leaves labourers in fear of what will happen if they voice their health and safety concerns.

Yet they say safeguarding is more needed than it has been for years as young inexperienced workers from Ireland and further afield are recruited to meet renewed demand.

Their fears have been sparked that decades of progress are now being reversed after site-related deaths doubled last year in London, where construction growth is strongest.

Two of Britain’s largest Irish contractors have dismissed the warnings, saying they have introduced new measures to promote health and safety.

Yet activists remain unconvinced, saying the risk of death and serious injury is growing at a time when Britain’s health and safety watchdog has had its budget cut by more than a third.

Their comments come in the week a man was killed on a London site run by Irish firm McGee, following deaths on three other high-profile projects in the city in recent months.

Concerns have also been raised about British companies that fly labourers over from their families in Ireland on Monday mornings and send them home on Friday evenings.

The practice, unheard of in most other industries, leaves workers feeling so “beholden” to employers that they avoid union membership, putting them at greater risk of getting killed or injured on-site, according to Unite.

Gail Cartmail, the union’s assistant general secretary, said she had encountered the practice with at least one labour supplier.

“These workers are not at the front of the queue to be associated with a trade union because there is a level of reliance that harkens back to how things used to work, when there was a patronage [between employers and employees],” she told The Irish Post.

Ms Cartmail admitted she had not seen evidence of injuries or deaths on the sites where those people work.

Ms Cartmail said worker safety is also being put in jeopardy due to the industry’s increasing casualisation, with thousands of labourers now being supplied by agencies rather than employed by firms themselves.

The situation has made work more transitory, so employees are not able to establish long-term health and safety committees for individual contractors, she claimed.

But the senior unite official’s deepest concerns were reserved for a “culture of fear” in which workers worry that raising health and safety concerns will cause them to lose their job.

She said the culture has arisen out of the long shadow of the blacklisting scandal, which saw 44 of Britain’s largest construction firms come together to create a list of more than 3,000 “troublemakers” so they could be kept out of work. 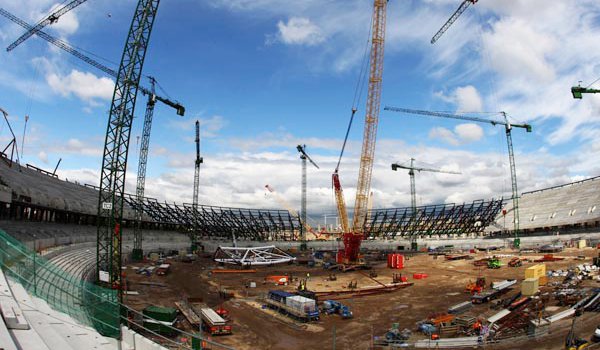 During the development of London’s Olympic Stadium, no construction-related deaths were recorded

MPs have said the practice ruined the lives of many workers, some of whom were put on the blacklist because they raised health and safety concerns or had trade union links.

But Irish-run firm McNicholas Construction said it has taken steps to prevent a culture of fear from developing among its workers.

David Beaty, McNicholas’ Business Strategy Director, said the company has introduced a system whereby labourers can flag up health and safety concerns anonymously by writing them down on cards that are put in boxes and sent to senior staff.

He added that McNicholas proactively encourages participation in the scheme and also has safety representatives on the majority of its sites.

That, in concert with other measures such as toolbox talks and an employee-led health and safety programme, has helped the firm significantly cut injuries on its projects in the past five years, Mr Beaty claimed.

He said that while there have been 61 injuries on McNicholas projects since 2003, there were two in 2011/12 and three last year despite the firm doing as much business in those years as before the 2008 financial crash.

One person has died on a McNicholas site in the past 10 years, a driver who was knocked down by a motorist in 2007.

Fellow Irish-run firm Laing O’Rourke sounded a similar tone, saying it places “the highest possible emphasis on the safety of all workers”.

A spokesperson for the company, which has had five worker deaths on its sites since 2003, said: “It is our belief that we will create a safer working environment by working together and encouraging everyone to focus on safety.

“Since launching a group-wide health and safety initiative — Mission Zero — in 2010, we have concentrated heavily on changing behaviours and culture on-site.”

But the unions Unite, UCATT and GMB said the largest firms are not doing enough to engage with their workers on health and safety issues and have called on them to make union presence mandatory on all construction projects.

Laing O’Rourke recently provoked outrage from unions after it responded to criticism over a death at one of its London sites in November by dismissing calls for greater union representation.

“Although union-appointed safety representatives may have an interest in the welfare of their members, we do not believe their involvement will add anything beyond our existing extensive approach, as they do not possess the technical understanding of our delivery approach to fully comprehend and be able to mitigate the safety risks on our projects,” a spokesman said.

Both UCATT and GMB said a change of heart was needed urgently as the industry grows again.

John McClean, GMB’s national health and safety officer, told The Irish Post a worker shortfall caused by an upturn in work and the retirement of older labourers who lost their jobs at the start of the recession, would force firms to recruit “a new hoard of inexperienced workers”.

That is likely to include many Irish people without a history of construction work, making them among the most at-risk, added the Co. Down native.

Mr McClean and Steve Murphy, UCATT’s general secretary, predicted a rise in the number of construction deaths in 2013/14 when official statistics are released in the summer.

They also raised concerns about the impact of the government’s decision to cut the budget of the Health and Safety Executive by 35 per cent.

A freedom of information request from UCATT showed a seven per cent fall in unannounced inspections of construction sites between 2011-12 and 2012-13.

Heather Bryant, the HSE's chief of construction, acknowledged union fears that the industry’s resurgence would be coupled with a rise in deaths and injuries.

“History and research show us that accident rates can rise as growth returns to the economy,” she told The Irish Post.

“But history does not need to repeat itself — by being ahead of the game, health and safety standards don’t need to be compromised.”

Ms Bryant cited the development of London’s Olympic Stadium, on which no construction-related deaths were recorded, as a “shining example” of how this could be achieved.

Unions also cite the London Olympics as an example of how projects should be undertaken, as full-time health and safety officials were recruited and workers were employed by the contractors themselves rather than being provided by agencies.

Ms Bryant added that despite the cuts, the HSE has maintained its frontline resources in construction, which is a “priority industry” for the organisation.