Some Loyalist items removed from eBay, but pro-IRA clothing still for sale

ONLINE market place eBay have come under fire for allowing the sale of a range of merchandise bearing the slogans of paramilitary groups.

T-shirts which commemorated massacres committed by groups such as the UFF and the UDA were taken off sale by eBay once the website was made aware.

Until the shirts were removed from the site it was possible to buy them and have them posted to any address within the UK and Northern Ireland. It was possible to collect them in store through the click and collect program.

The auction site acted quickly to remove the t-shirts, but have failed to remove a range of IRA themed items.

For £33 you can buy a black sweatshirt emblazoned with a call to arms for the organisation.

The design features the image of a soldier holding a machine gun alongside a shamrock.

The jumper also carries the slogan, "Join the army, fight the oppression". 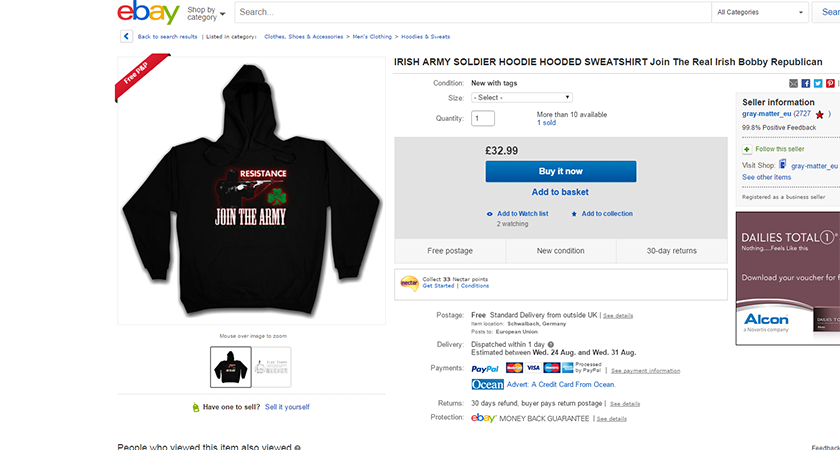 The design is also available as a hoodie for £32.99

The design can be printed on a number of different items including a fifteen pound t-shirt, a hooded sweatshirt and a tank top. All of the the items come with complimentary free postage from Germany where the seller is based.

"There has been controversy around items being sold on eBay which glorify loyalist terrorism and which were then distributed through Argos stores, when eBay became aware of this they moved swiftly to remove these items from their website however there remains many different items on the official eBay website which glorify IRA terrorism and which alike the UDA/UFF branded items are wholly unacceptable."

"We are of the view that any of these items that glorify terrorism both loyalist and republican need to be removed from sale."

He expressed his concern that items such as these, could effectively indoctrinate another generation into the divisions of the past.

"We call upon eBay to up its game and monitoring controls, it should not take press articles in newspapers for a company to understand its' responsibilities around effectively governing what can and what cannot be sold through its services.