A member of the military boards the bus after escorting airline passengers to the Crowne Plaza hotel to begin their period of quarantine on March 29, 2021 in Dublin (Photo by Donall Farmer/Getty Images)

THREE WOMEN who walked out of hotel quarantine yesterday were found 200km away in Galway.

The women, who had been staying in mandatory quarantine in a hotel in Santry for a number of days, left the building yesterday and disappeared.

It is unclear which country they had travelled from which required mandatory quarantine, or whether they were in MHQ because of not producing a negative PCR test on their arrival into Ireland.

They were stopped by a Garda and advised to return to quarantine, which they agreed to do. It is unclear whether they were pulled over because the license plate number had been sent to Gardaí across the country, or if it was a coincidence.

A Garda spokesperson said the matter is with the Department of Health, which is in charge of Mandatory Hotel Quarantine rather than the gardaí. 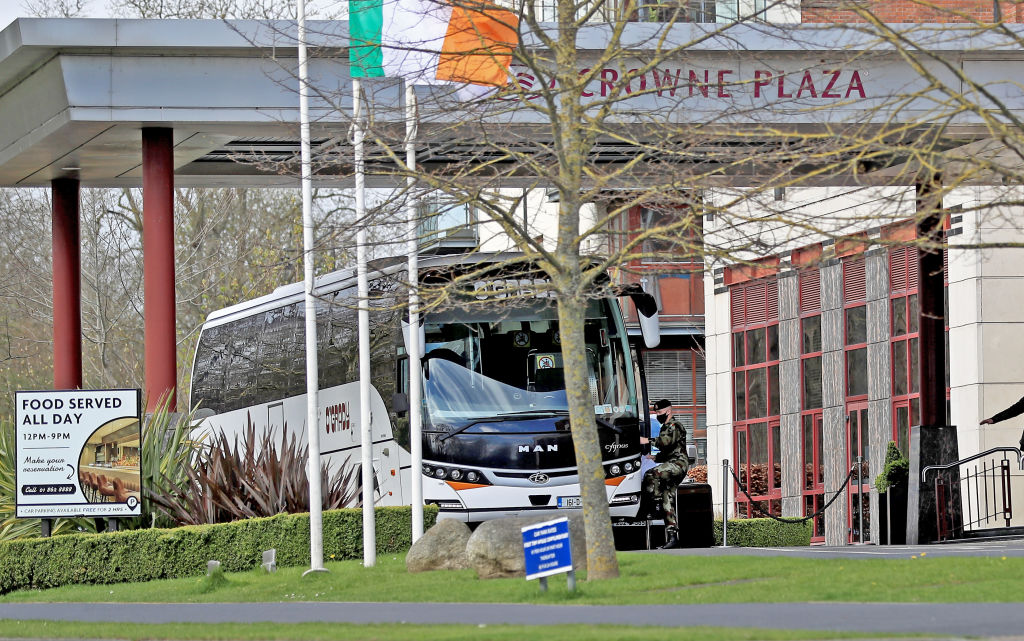 A member of the military boards the bus after escorting airline passengers to the Crowne Plaza hotel to begin their period of quarantine on March 29, 2021 in Dublin (Photo by Donall Farmer/Getty Images)

In a statement yesterday evening, they said:

"An Garda Síochána are liaising with the State Liaison Officer at a designated quarantine facility in accordance with current protocols following a report of three people leaving a facility in the Dublin area earlier today,” a statement this evening said.

"A graduated policing response was adopted by Gardaí and all three have since been returned to the facility.

“As the Department of Health are the lead agency in relation to the management of mandatory quarantining, An Garda Síochána will not be commenting further at this time.”

The incident comes after three people absconded from a quarantine hotel in Dublin last week, days after the scheme came into effect.

Two people were later found and returned to the hotel, and the third is believed to have left the jurisdiction, according to The Journal.

Another incident which is currently before the courts saw two women refuse to enter mandatory hotel quarantine upon their return from Dubai, where they had undergone breast augmentation surgery.

Anyone who does not comply with the mandatory hotel quarantine faces a 2,000 fine and up to a month in jail.

You can read more about Ireland's MHQ scheme and the countries affected here.