The 88-year-old, who hailed from Longford Town, passed away at a nursing home near his Harlow home on Sunday, November 3.

Mel came to Britain in the 1950s to find work after working at the Midlands Photographic Company in his hometown for five years.

Having previously worked with Irish Post founder Brendan Mac Lua in Ireland, when he launched the newspaper in Britain in 1970 Mel was quickly signed up as a staff photographer. 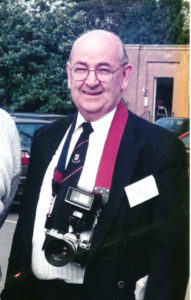 It was a role he would hold for many decades, with his son Malcolm also taking up a long-term photographer position with the newspaper in 1981.

A popular figure across Britain’s Irish community, Mel’s work saw him covering everything from community events to papal visits and the notorious Birmingham Six campaign – making lifelong friends wherever he went and finding himself on first name terms with various politicians, Taoisigh and even Prime Minister John Major. 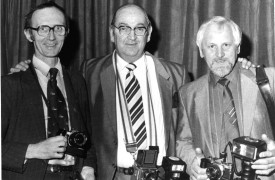 Mel, who had eleven siblings, also remained heavily connected to his hometown in Longford and received a Longford Person of the Year Award in 2016.

He was also the recipient of awards from Longford Town Council in 2013 and the Longford Association London in 2009 and an Irish World Award.

After moving to Britain, Mel met his beloved wife Catherine ‘Kit’ McNally and they set up their home in Harlow, where they raised son Malcolm and daughter Rita.

Kit, who hailed from Castleconnor, Co. Sligo, worked as a midwife, delivering many babies in the Harlow area over the years. She passed away in May 2013.

“He mixed freely with the London Irish community and the great and good of British society, To most of us he was simply Mel or Mac whilst for others it was always Mr McNally."

He added: "Nothing probably immortalised him like his enduring friendship with former British Prime Minister, John Major and Albert Reynolds.

"At the time of intense peace talks with the Irish and British government (leading to the Good Friday Agreement) he was probably the only (doubt there ever will be another) photographer on first name terms with our then Taoiseach, Albert Reynolds, and the British PM, John Major.

“On the morning of a historic breakthrough approximately 500 photographers filled Downing St for that elusive special shot. John Major famously walked towards the mass of cameras and called on his "good friend Mel" to come inside to take a personal photo of himself and Albert.” 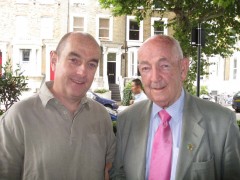 Others took to social media to share their condolences, with Cecilia Gallagher stating: “Mel was a lovely man, knew him from the 1990s. Always happy to show up and take the pics. May he rest in peace.”

Joan Farrell said: “We are all saddened here, my boys were lucky enough to have met Mel in London. Lovely memories and beautiful photos, a unique person.”

While former Irish Post colleague Peter Carberry said: “Mel was a legend, it was an honour to know and work alongside him. What a life he lived, no half-measures and so many people whose photo albums will contain wonderful examples of the man’s handiwork.”

He added: “God rest his soul... and Saint Peter had better not have his eyes shut when Mel’s flash goes off.”

Mel leaves behind his sister Rose in London, his son Malcolm and daughter-in-law Sarah, daughter Rita and son-in-law John, grandchildren Erin, Katie, Thomas and Sophia and many nieces and nephews in Ireland and Britain.