THE unmarked London grave of Irish football legend Patrick O’Connell is expected to be restored on the 57th anniversary of his death next February.

Campaigners fundraising to restore the grave at St Mary’s Cemetery in London’s Kensal Green were joined by O'Connell's grandson to honour the former Manchester United captain on Wednesday.

The team behind the Patrick O’Connell Memorial Fund are closing in on their £3,000 target, which will allow them to clean, maintain and place a “proper memorial” at the site.

They now believe that the 18-month campaign could conclude with the restoration of the grave on February 27, 2016 - exactly 57 years since he died. 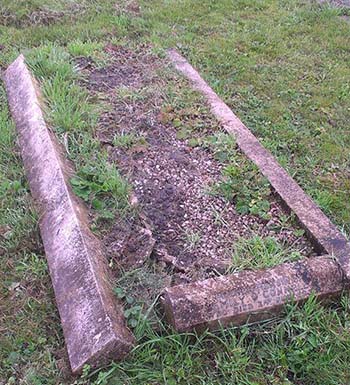 Born in 1887, Dublin native O’Connell is renowned for becoming the first Irishman to captain Manchester United and later manage Barcelona, with whom he won a La Liga trophy.

Despite his successes, his life took many illustrious turns, and he died destitute in in 1959 and received a pauper’s burial in north west London.

The event earlier this week formed part of a BBC Radio 4 documentary show Saturday Live, to be broadcast in the coming weeks.

For many of those in attendance, it was the first time seeing the grave.

Kensal Green Labour Councillor Matt Kelcher also organised a quiz at The Masons Arms pub in Kensal Green in the evening, which raised £200, helping the fundraisers reach £2,400 of their £3,000 target to restore the grave.

Several signed football shirts were also auctioned on the night, including: Southampton manager Ronald Koeman’s Barcelona jersey, a Gerry Armstrong shirt from the 1982 World Cup, signed by the Northern Ireland team, and an England 1966 shirt signed by the Gordon Banks.

In June, a plaque was unveiled in Dublin as a tribute to O’Connell.

The honour was made under Dublin City Council’s new Commemorative Plaque Scheme, and unveiled at 87 Fitzroy Avenue in Drumcondra – where the footballer lived.

A mural was also revealed in Belfast in August by the Lord Mayor of Belfast Arder Carson, on the Falls Road close to where Patrick's career began at Belfast Celtic FC.