Where should you fly? New figures reveal which Irish airports are flying high

NEW figures for 2017 have revealed which airports in Ireland are experiencing growth – as some traditional hubs such as Shannon Airport suffer from increasing competition.

Central Statistics Office data for the second quarter of this year shows that Cork, Knock, Kerry and Dublin airports all increased their passenger numbers compared to the same period in 2016.

Kerry Airport saw the biggest jump in its numbers, increasing eight per cent to 98,500 in the three months to the end of June.

Knock International – which was rebranded Ireland West Airport Knock in 2006 – increased four per cent to 208,000.

It wasn’t all good news though, and Shannon Airport – once one of the strongest performing hubs in Ireland – saw its traffic fall by almost 6 per cent to 445,000 compared with the second quarter of 2016.

Meanwhile, its numbers from January to June fell by five per cent overall to 727,000. 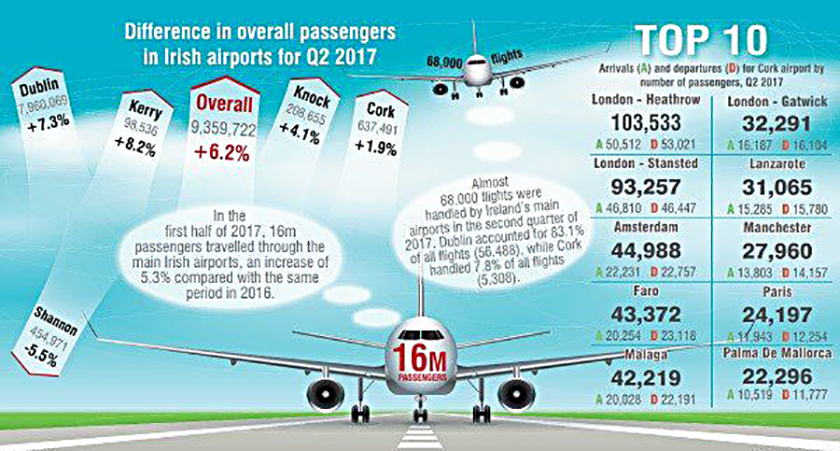 A spokesman for Shannon Airport said: “While there was a decrease in terminal traffic due to a reduction in Stansted services, this was negated by an increase in transit passengers, which are not recorded in CSO figures.”

He added: “We are in ongoing conversations with a number of airlines and look forward to 2018.”

The new figures also show that the dependence of Irish airports on flights from London and Britain at large is continuing.

For both Cork and Dublin, the top three routes were London-Heathrow, London-Stansted and Amsterdam-Schiphol in that order.

So where should you fly?

Here are the top five Irish airports ranked in terms of passenger traffic, between April & June…