Barry McGuigan: Carl Frampton is 'the best Irish fighter we've ever had'

during their World Super-Bantamweight title contest at Manchester Arena on February 27, 2016 in Manchester, England.

Frampton unified the super-bantamweight division with a split decision victory at Manchester Arena, collecting Quigg's WBA strap to add to his retained IBF title, becoming the first Irish fighter to unify a

Despite one of the judges scoring a win for Bury native Quigg, Frampton always looked in control of the fight and manager McGuigan now has plans for his charge to crack America with his explosive style.

“I think this kid is the best Irish fighter we've ever had, and that's a big, bold statement,” said the former WBA featherweight champion from Clones.

“I'll get told off for saying it, but he's got time to prove me right. I genuinely think he is, but if he's not already the greatest Irish fighter, then we're intent on proving that he is.

“I've always said that Frampton is so naturally talented and he has boxing intelligence. People don't always know what that means, but I do because I'm a fighter. 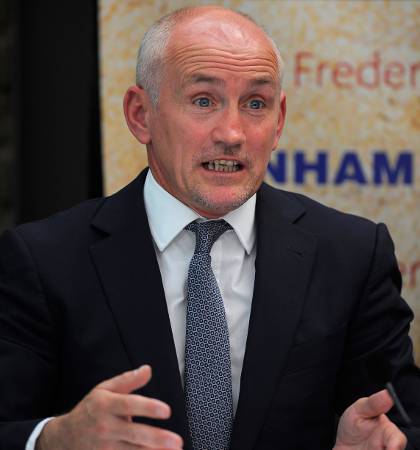 Frampton's manager McGuigan [Picture: Getty]
“I can see how he thinks and how he handles pressure. The more pressure, the calmer he becomes - it's extraordinary. There are great fights out there and he may not win all of them, but it's really exciting for us.”

Although Quigg's promoter Eddie Hearn is keen to arrange a re-match in Belfast this summer, McGuigan would rather move on, and a crack at Mexican Leo Santa Cruz before an American audience is a prospect he's going all out to make happen.

“Santa Cruz is an obvious fight, a very obvious fight. We'd like to go to America again, maybe east coast this time,” said McGuigan, who saw Frampton recover from two early knock-downs to beat Alejandro Gonzalez on his US debut in Texas last July.

“But it would also be great if we can get him over here, Belfast ideally. Santa Cruz went up to featherweight to avoid the super-bantams, that's what he done.

“We'll sit down and look at all the options but, quite honestly, with the greatest respect to Scott Quigg, that re-match is not an attractive fight for us, we need to step it up to the next level, and Santa Cruz is a real possibility.”

Frampton, who was allowed to dominate the early rounds through Quigg's peculiar inactivity, admitted he was mystified by judge Levi Martínez’s decision to score 115-113 in the Englishman's favour, with the other two judges going 116-112 for the Belfast native, but he’s open to a re-match if the public demand is there.

He said: “You look at it, you read about it, and it says split decision, but it wasn't a split decision, or at least it shouldn't have been; I was very comfortable in there. If I have to have a re-match, no problem, but the world's our oyster now and I think we should move on.

“He won a few rounds towards the end, but I think I hurt him with a couple of body shots. He never hurt me, not to the body. He hit me with a good shot to the head but I was fine.”