From bitter to fitter: Former hurler Peter Ryan on adopting to his new life as a Paralympic cyclist

PETER RYAN knew something was wrong.

A talented hurler, good enough to play for the Tipperary minors, all of a sudden he was no longer able to do the things that once came naturally. Once upon a time he felt he could catch any ball falling from the sky. But not anymore.

His sight was failing – and so was his game.

“Go see an optician,” he was told. And that was when Ryan’s life changed. From the opticians, he was sent to hospital, and after six months of tests and analysis, he heard the words Leber's Hereditary Optic Neuropathy for the first time.

It’s a little-known disease. But what it meant was that he would lose 90 to 95 per cent of his sight, and as a consequence, also lose his ability to hurl and continue his work as a plasterer.

All these things came back to him as he spoke with the media at the launch of the An Post Cycle Series. All that trauma. All that fear. How would the rest of his life pan out? Would he be able to play sport again?

He didn’t know. He couldn’t have realised then that he’d become a Paralympian. Couldn’t have realised his ability on a bike would take him to world-class levels. Yet it is a measure of his character and courage that the deterioration of his eyesight never got in the way of his vision for the future.

“It’s hard to explain the way things are,” he said. “But it’s like looking from behind a curtain where you can only see shapes and shadows. I’m learning to adapt and I have to say my world is made a lot easier because I have seen. I do a lot of connecting dots because I know what a cooker is, or whatever. If I was like this from birth I would be in a lot worse of a predicament.”

Finding positives out of a trauma is never easy. Yet he did it. As he grasped the reality that work would never be the same again, he moved from the building site to the lecture theatre, throwing his energy into a strength and conditioning course.

If that proved a more than adequate substitute then being forced away from the hurling pitch left a vacuum that he initially did not know how to fill. Other new discoveries were equally as unpleasant.

“The only thing they tell you (about this condition) is that you’ll never go fully blind and you can’t give it to your children,” he said. “It’s genetic, but the females carry it and the males get it. My sisters, if they have boys, they could give it to them. At 20 years of age there isn’t much you can take from that.

“It’s the teenage years it develops in. I was told if you don’t get it by 20, you’re not going to get it. My birthday is in April and this all started that March.” 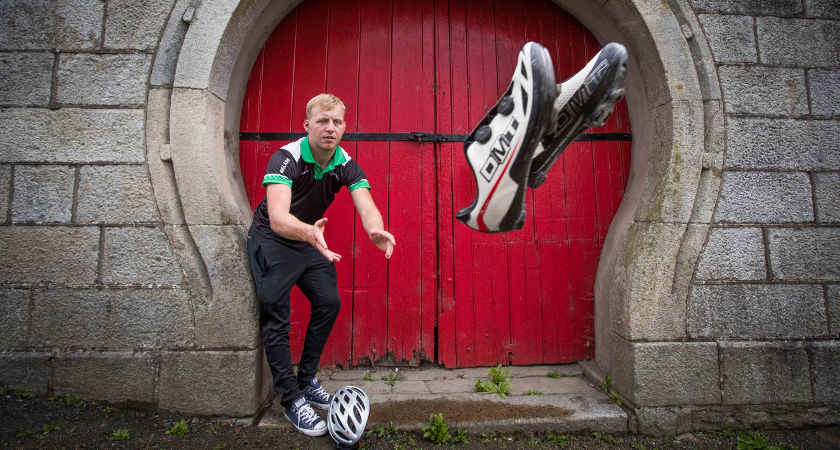 That was the bitterest pill of all to swallow. How could a young man, with all his life in front of him, deal with a setback like this? “I turned bitter,” he said, “there’s no point in sugar-coating it. I put up a very good front for a long time. When I got that diagnosis, I was the only one who wasn’t crying.

“But while on the surface I was telling people I was grand, in reality, I was angry at life. Sport was a huge part of my life and it was taken away from me. A lot of what I say now is hindsight because at the time I wasn’t conscious of it. I do think that we live very simple lives and looking back I had work, sport and a social life. Two of the three of those were gone so I did a lot of socialising. Too much.

"I did the pure Irish coping mechanism on it. That went on for two-and-a-half years. I just had a constant tug-of-war going on – I was becoming a blind person, but I wanted to be the old me. Acceptance was non-existent.”

What changed was that he changed. He made a decision to spend 28 days in the Aiséirí Centre in Cahir and hasn’t touched alcohol since. Just as significantly, he started to open up and express his emotions.

“I dealt with a bit of stuff and got it out there and stopped pretending. I accepted that my life changed. I don’t like my condition, I f**king hate it; without it I could still have the simple life I used to have, but I have to live with it. I wanted to rebuild my life.”

He did so slowly. It was 2012 when he first considered cycling. Within six months he was a national champion. Next came Europe. He was one of the most talented cyclists there too. Finally, there were the Paralympics. Surely he couldn’t make it to Rio? For a while, it seemed like he wouldn’t but then last week came the news he had hoped for.

Ryan’s event is the 4k pursuit, where the cyclists start on opposite sides of the track and try to complete the course in the quickest time. If one bike catches the other, the race is over.

The Court of Arbitration for Sport decided to uphold the International Paralympic Committee’s suspension of Russia from the forthcoming Games. Accordingly, Ireland were awarded an extra berth in cycling. Ryan was heading to Rio to compete in the Men’s B Tandem Time Trial and the Men’s B Tandem Road Race.

He is going with his pilot, Poland-born Marcin Mizgajski, who steers the bike from the front, with Ryan (the stoker), working in tandem.

He needed to get that feeling again of competing, of chasing a dream, of trying to be the best he could. “I want to race at a high level and win as many accolades as I can. I want to enjoy it while I do it because once upon a time I had no appreciation for what I was doing.

“There was a time when I was a bitter young man. The list of things I couldn’t do was big, but now I’d be of the mindset that I can do anything bar drive. It’s a different place and I enjoy it.”

Rio isn’t the end of the journey, just a stopover.