Cheltenham Festival: Willie Mullins likely to be the main man yet again

YOU might be forgiven for thinking there are no Irish trainers, other than Willie Mullins, in with a real chance of returning winners at this year’s Cheltenham Festival.

At one stage the Carlow trainer had submitted 152 entries from his yard, a figure which at the time equated to 71 different horses.

The depth of his resources is eye-widening and numbers like that mean success — for Mullins at least — is pre-determined.

But will success come from the most high-profile contenders? Or as Mullins mischievously suggested, will “something else” emerge along to make up for one or two bankers should they not win.

And what about some of the other Irish raiders travelling under the training banners of Enda Bolger, Dessie Hughes, Pat Fahy and Ted Walsh, to name but a handful with live chances?

The bookies, at least, expect their achievements to be dwarfed by Mullins who has recorded 29 successes over the years at the four-day Festival.

In 2013, Mullins set a personal best annual score of five victories and is an almost unbackable favourite to be leading trainer this time around.

That mammoth entry list has been whittled down to around 40 horses — if you can call that whittled down — and the trainer has struggled to talk down the strength of his hand.

“I keep saying to my son Patrick, 'you think this is normal — this is not normal, this is out-of-this-world stuff',’” he said.

“I think the same every time I go up to the gallops in the morning. We have [many] horses that any trainer, and indeed up until a few years ago me, would have been delighted to have as my star horse in the yard.

“We enjoy it, but don't take it for granted, and it could all end, you don’t really know why things go up and down.”

Word from the Closutton yard is that training has been running ahead of schedule and that Hurricane Fly is in rude health. 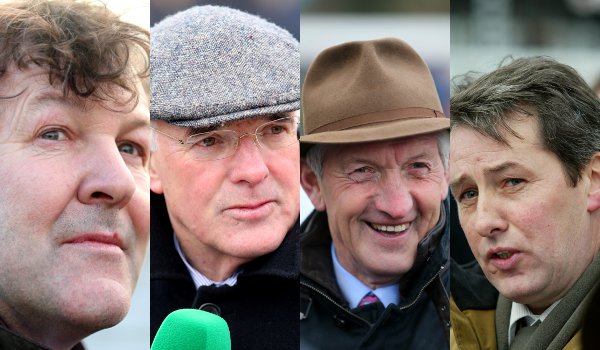 Meanwhile it has also been suggested that riding partner Ruby Walsh is savouring the opportunity of taking on The New One, and everyone else in the Champion Hurdle.

The belief is firm that the record-breaking 19-time Grade 1 winner can make it number 20 on opening day.

But in the sometimes strange default commentary that has followed this horse’s career, doubt again lurks.

Hurricane Fly remains the main hope of completing back-to-back Champion Hurdles and Quevega will attempt to win a sixth Mares’ Hurdle. These are the two the trainer dearly wants but he is reluctant to heap more pressure on his two big stars.

Behind that ice-cool demeanour he has admitted feeling the pinch.

“The fear of failure is terrible, and if for one or two of the key horses, the ball hops the wrong way on the day, next thing you are into depending on 33-1 shots to get you a winner.

“And though you get maybe two 33-1 shots winning, the key horses are beaten, and people are saying ‘Willie’s had a bad Cheltenham’. My fear going to Cheltenham is everyone is expecting.”

But while the focus fixes itself to Mullins, other Irish trainers will slip into Cheltenham almost unnoticed.

Can Guitar Pete bring home the Triumph Hurdle for Enda Bolger or Gilgamboa, the County Hurdle for the same yard?

Of course Dessie Hughes and lots more besides will be expecting Our Conor to be at the coal face when the Hurricane is blowing a gale in the Champion Hurdle and then there’s Lyreen Legend in the Ryanair Chase.

What about Big Shue, trained by Kildare-based Peter Maher who has won in Cheltenham before and the expectation is that Paul Carberry will saddle up for the Cross Country Chase? And there will be heaps of support for the Pat Fahy-trained Morning Assembly in the RSA Chase.

There are other nuggets. The Ted Walsh-trained Foxrock is among the favourites for the National Hunt Chase on Tuesday and his daughter Katie will perform the steering job there.

What a story a success here would be. Expect Mullins to be crowned the main man again but expect exciting Irish cameos.