AHEAD OF the Cheltenham Festival (starting Tuesday 15th March), and with the return of Irish racegoers in person after two years away, Paddy Power has released its new TV ad, which plays on the one-sided rivalry between Ireland and England - “the best rivalry you’ve never heard of!”

Hollywood heavyweight Colm Meaney fronts the ad – which will be broadcast for the first time in Britain TONIGHT (Friday 4th March) - to explain to English viewers why the Festival is the one chance each year that the Irish have to “win big on your turf”, after constant suffering at the hands of their neighbours. And it’s payback too, Meaney adds, “for not caring as much as we do about Ireland versus England!”

Calling out the English for mocking the way his compatriots say “thirty-three”, and for ruining words such as “banter”, the Star Trek legend pleads with viewers to stop claiming the likes of Niall Horan as their own, and to do a better job at pouring a decent pint.

But despite all these wrongdoings, the Irish regularly get their own back by dominating the races at Cheltenham. Ireland has won five out of the last six years of the Prestbury Cup, which is awarded to the nation with the most wins during the Cheltenham Festival.

And, after romping home to a 5-23 victory against the British in 2021, Colm and co will have plenty to brag about going into this year’s races.

COVID restrictions kept Irish punters away last year, but the 2022 Festival is set to reignite the rivalry once again. 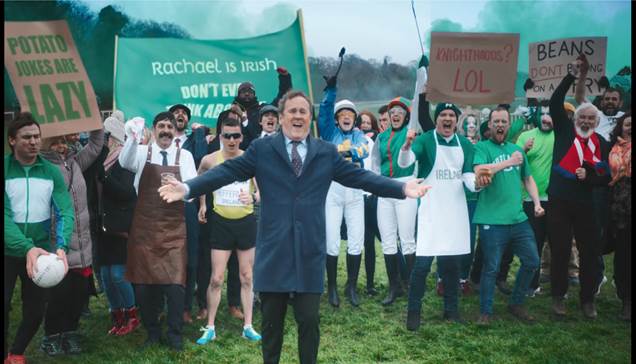 “There’s only so many potato jokes us Irish can take before it gets a bit boring. So, for one week each year, it’s nice to head over to Cheltenham and put the English back in their box.

“And, with England and Ireland also facing each other in the Six Nations the weekend before Cheltenham, there’s a real opportunity for a full sporting takeover.

“We’d like to thank Colm Meaney for being the star of the show, and we’re sure that featuring in an ad complaining that Brits serve baked beans with fries definitely tops his other career highs, such as staring alongside Gerrard Butler and Jamie Foxx in Law Abiding Citizen.”

Looking to the Cheltenham Festival, Paddy Power continued: “We’re expecting another successful Festival from Ireland, with Irish horses favourites for almost every race – not least because of the incredible Rachael Blackmore, who we would like to remind everyone across the pond, is very definitely Irish by the way. Don’t even think about it.”