Euro 2016: Why Ireland have good reason to believe they can beat Belgium

during the UEFA EURO 2016 Group E match between Belgium and Italy at Stade des Lumieres on June 13, 2016 in Lyon, France.

MARC WILMOTS doesn’t wear the favourites tag well. Nor do many Belgians. Despite a footballing history that is more than credible – and includes an appearance in the final of the 1980 European Championships, and the 1986 World Cup semis – they know they are capable of competing but wonder if it is possible to win.

"Just because people are crazy it does not mean I am as well,” Wilmots, the Belgian coach, said last month. “There are teams like Spain, Germany and France that have a lot of quality. We are among the outsiders...like Italy and Portugal."

Are they, though? If you went by their history – their lack of a major trophy, their absence from leading tournaments for 14 years between 2000 and 2014 – you would say so.

Yet over the last six years the fruits of an underage revolution have been so plainly visible – not just in their improving results and performances – but also on the European club scene, where the continent’s best clubs have taken up the option of buying their players in bulk.

Yet Wilmots claims they are ‘outsiders’. “People have talked us up too much,” he said. Surely, though, he must understand why especially when he looks at Kevin de Bruyne – his attacking midfielder worth £55m, Christian Benteke, a £32.5m reserve, and Eden Hazard, Chelsea’s £32m winger.

Along the way, the queries about Belgium haven’t focused so much on their players as their manager, who may have taken them to the World Cup quarter-finals in Brazil but who walked away from that tournament with his reputation dented.

"We wanted to build an altruistic team. The individual doesn't count. Before we often heard [players say] 'me, I.' Now it's 'we.' Together we can do great things. We're stronger [together]." 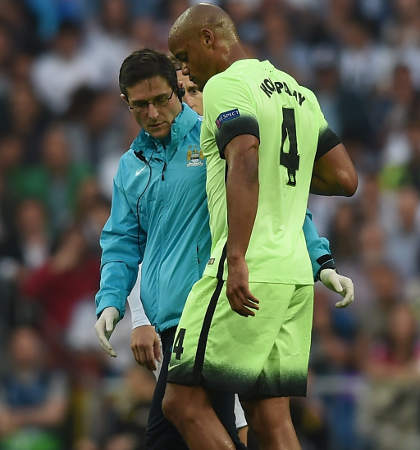 Vincent Kompany is injured [Picture: Getty]
Some, however, doubt if they are together. “I just think that if Ireland can get a run at them, if they can unsettle them, then we stand a chance,” says Kevin Kilbane, the former Irish international turned TV pundit. “For sure, Belgium have loads of talent. But with us, we’ve always punched above our weight through togetherness. Are the Belgians as unified as us?”

The answer was left hanging, and in qualifying, that answer was not terribly clear. On the road to France, Belgium did score 24 goals in 10 games but 16 of those came in their four games against Andorra and Cyprus. At the back, Vincent Kompany has gone, through injury. His leadership as well as his defensive skills will be missed.

“Kompany has been one of the outstanding players, never mind defenders, in the Premier League in this decade,” said Niall Quinn. “That he has gone from Belgium’s side is a good thing for us. Absolutely it is. So while that match is one where Ireland will be underdogs, a question remains about Belgium. And it is not whether they are talented or not – because they are. The question really is about their winning mentality.”

There’s an irony in those words because one of the key reasons that took Belgium from 71st in FIFA’s world rankings up to first came on the back of a policy that was formulated out of the back of the University of Louvain’s findings from the early years of this century.

After studying over 1500 youth matches, the University concluded that the problem with Belgian underage football was that there was an emphasis on winning rather than coaching.

Acting on these findings, Michel Sablon, their national technical director, formulated a 10-year plan, intent on changing the country’s football culture and getting them up to speed with the trends prevalent in Germany, France and Spain. Accordingly, the country’s leading clubs each received a brochure demanding that, at every national age group, from Under 14s upwards — teams would play a high-tempo game operating off a flexible 4-3-3 system.

"Our professional clubs were failing. And the level of football from the national teams was not good enough,” Sablon said. "At that time we were nowhere. Our Under-17 and Under-19 teams were ranked between 23 and 28 in the world. We really were nowhere. Now? We are top 10."

Significantly, Sablon had the authority to tell clubs what to do, and they were prepared to listen.

"The clubs, the national team and the coaches of the schools were asked to abandon the old ways of playing and embrace change. It took more than five or six years before everyone could bring themselves to accept it. Because for most of the coaches and the clubs, all they cared about was winning the game. Nothing else.

"But that was absolutely wrong for the development of all the players. Totally wrong. It wasn’t easy convincing them. In the beginning it was terrible. But eventually they began to see it. They went with us because they saw that what we told them worked. It made players better. I convinced them that we knew what we were doing."

Does Wilmots know what he is doing? There are plenty who doubt it. And yet, scan through the Belgian team sheet – and then look at Ireland’s and you can see the difference in quality.

Belgium have Romelu Lukaku (£28m), Ireland have Shane Long (£12m). They have Eden Hazard and Thibaut Courtois, Ireland have Aiden McGeady and Darren Randolph. Yet football isn’t decided on paper.

Having slayed Goliath, taking down his little brother is within their capabilities.

Euro 2016: After Belgium battering Ireland must throw everything at Italy

Euro 2016: Everything you need to know about Republic of Ireland’s Group E opponents