LONDON, ENGLAND - FEBRUARY 27: Tommy Bowe of Ireland celebrates as he scores the winning try during the RBS Six Nations match between England and Ireland at Twickenham Stadium on February 27, 2010 in London, England. (Photo by Mike Hewitt/Getty Images)

IRELAND versus England is the game that every Irish person earmarks to watch in every sport - and rugby is no different.

The historical, political, and social element for Irish men and women to get one over the English is one that is deeply ingrained into our psyche from a young age.

One man who got to experience beating our nearest neighbour is Ireland's former winger and Grand Slam winner Tommy Bowe - who scored 30 tries from 69 tests while wearing an Irish jersey.

This week he gave an exclusive interview to The Irish Post about the all-important England v Ireland Six Nations clash which takes place in Twickenham this Saturday. 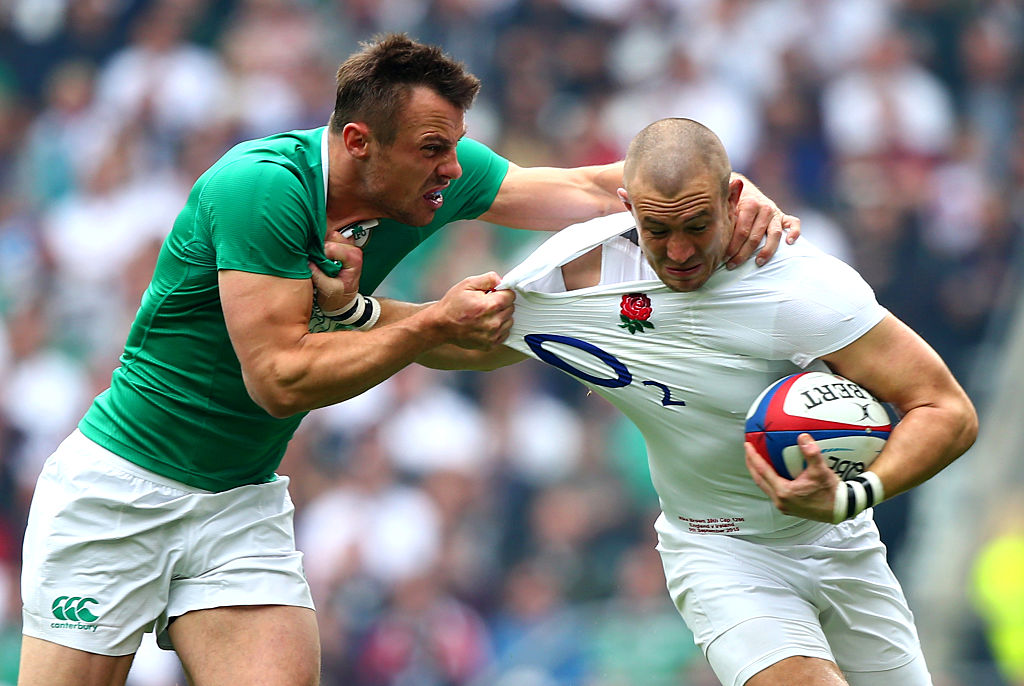 When asked who his favourite for the tie was, Eddie Jones, the England coach, said Ireland were – a sentiment that Bowe agrees with.

"I think that Ireland are definitely favourites going into the game,” he said.

“The form that they have shown in this Six Nations warrants that and probably more so in November.

"They are playing some fantastic rugby at the moment, but Twickenham is a difficult place to go.

“I have had some good days and bad days there and it's a really intimidating stadium to go to.”

He explained: “Playing in front of 80,000 people is tough, because there's that added pressure of being Irish.

“Everyone back home is backing you to get one over the English and that adds that little bit of pressure to it.

Ireland were bullied by the French front row in Paris in the second round of the championship by Uini Atonio, Cyril Baille, and Julien Marchand in the 30-24 defeat at the Stade De France

Bowe said he was worried that England could use the French template to beat the Irish this weekend.

"I do think [France] have shown a template of how you can beat this side,” he admits.

“If [England] can muscle up to them and slowdown that ruck ball, which we know Ireland are good at, then that could be a problem and make it a tough day for Ireland. " 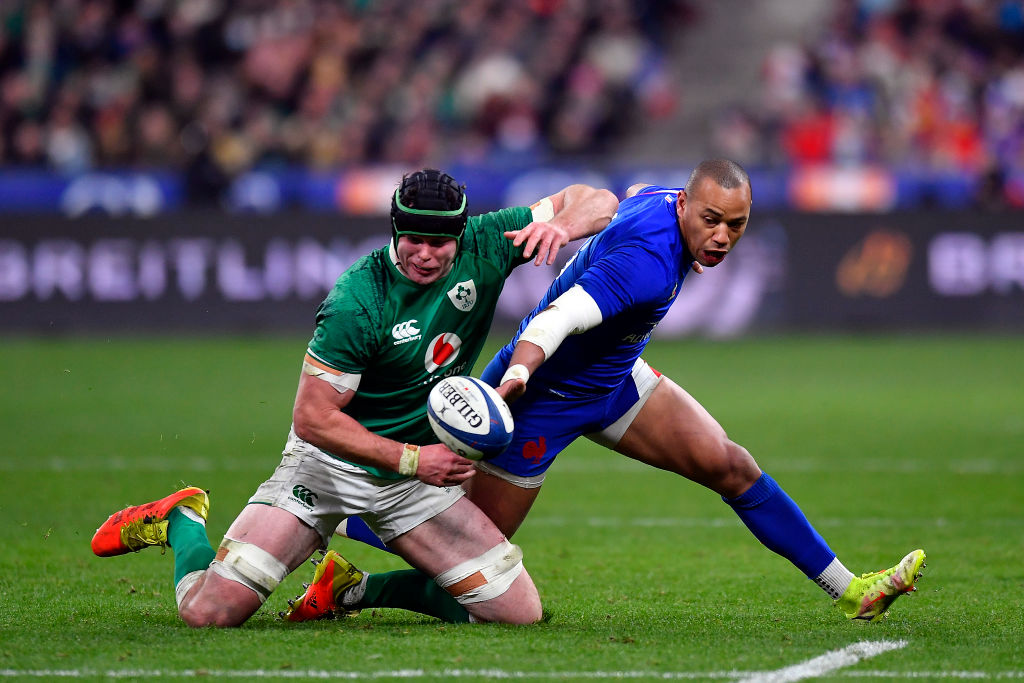 PARIS, FRANCE - FEBRUARY 12: Gael Fickou of France fights for possession with James Ryan of Ireland during the Guinness Six Nations match between France and Ireland at Stade de France on February 12, 2022 in Paris, France. (Photo by Aurelien Meunier/Getty Images)

Ireland will miss front row forwards Andrew Porter and Ronan Kelleher for the rest of the Six Nations and will have Cian Healy and Dan Sheehan come in as replacements for the pair.

Bowe said that it will be a blow, but the likes of Ian Henderson coming back into the side will add bulk.

"I'd be interested to see if they move Tadgh Beirne to 6 and Calen Doris to 8. I think that adds and gives Ireland three good lineout options,” Bowe suggests.

“I know that England are going to try to target Ireland physically, so having three big men may benefit Ireland."

Johnny Sexton is a player that's often targeted by opposition players to disrupt the flow of Ireland's game.

Ireland's playmaker had got his fair share of knocks over the years.

When asked if Sexton's opposite number Marcus Smith, England's fly-half, would receive the same treatment by Ireland, Bowe, 38, said: "He's a fantastic player. We saw that for the Lions and we saw that for Harlequins. I think he will be targeted by Ireland.

“The 10 is normally the player that gets that treatment, likewise Sexton will get it.

"I think their focus will be on other areas though, it's hard to pin it down on one person.”

James Ryan spoke this week about Ireland losing a bit of focus coming into the France game and mentioned that Ireland were ready for the Twickenham roar.

The former Ulster and Ireland winger scored two tries against England in 2010, one that ended their Grand Slam hopes in 2010 and knows all too well about the pressure.

Live on TikTok at 7pm
A classic between England Rugby and IrishRugby from 2010.

He added that it didn't matter who scored against England however, claiming the Irish players won't be too bothered about touching down if they don't come away with a win.

Unquestionably, Ireland's game against England represents a massive test for Andy Farrell's side - and with it comes the added pressure of an impending World Cup.

Ireland have flattered to deceive at every tournament and talk has started to emerge again about Ireland's chances of lifting the cup in 2023.

Bowe, like many others, feel that the timing of Ireland's excellent form is off and that wins against New Zealand in the Autumn could come back to Ireland.

"I'm a little bit fearful that we have got our timings wrong,” he said.

“It seems a little bit like the last World Cup, where we beat the All Blacks in November, we won the Grand Slam, everything was going brilliantly, but then the wheels came off and teams got cute to the style of rugby we were playing and smartened up to it.

“We had a few players then who were key to the team who were starting to move on in age.

“You do have to worry about that coming into the World Cup,” he adds.

“Now we are playing exciting rugby and there's a lot of really promising young guys coming through, but it's still a year and a half away.

“If we hit the limit now, you'd wonder what will happen this time next year in the Six Nations and with the likes of Johnny Sexton, who will be 38 by the time the World Cup comes around.”

Sexton signed a new deal this week and earmarked the World Cup in 2023 as his last hurrah in an Irish jersey.

Bowe, like many others watching Ireland, knows how important Sexton is to this Irish side.

We're delighted to announce Ireland captain @JohnnySexton has signed a contract extension up until the end of Rugby World Cup 2023. 🔒#TeamOfUs | #IrishRugby

"The jury is still out on Joey Carbery, Jack Carty and other fly-halfs in the country as to whether they can step up to the plate and replace Sexton,” he said.

But Bowe feels that this Six Nations is a perfect time for Ireland to solve that problem at 10.

When asked why 10 was a position that Ireland doesn't excel in, he said: “We do produce the players, but they are not being given the opportunity.

“You look at Carbery, he played well against France and came off at about the 50th minute mark against Italy.

“We know what Johnny Sexton can do at test level, but personally I think if we are to find the successor to Johnny Sexton it needs to happen now in this Six Nations period because we have a three test tour to New Zealand and that's not a place you want to test players.”

He added: “Then we have the Autumn and after that a Six Nations.

“Unless these guys get the minutes under their belt we are not going to know if these guys are good enough to take this team on at international level.”

Returning to the huge match ahead this weekend, when asked what the score in the game would be, Bowe predicted a 21-19 finish, in favour of the Irish.