IN THE aftermath of David Moyes’ sacking from Manchester United, the significance of interim manager Ryan Giggs on the training ground with former teammates Nicky Butt, Paul Scholes and Phil Neville — the Class of ’92 — wasn’t lost on Celtic fans.

Neil Lennon was brought in as temporary boss after Tony Mowbray’s fruitless appointment. Like Moyes, it’s widely regarded Mowbray was of stellar character but he wasn’t the right fit as Celtic manager.

Lennon immediately cut a more convincing figure. Similar to Giggs, he made an indelible mark on the club as a player and quickly appointed familiar and trusted figures in the form of Alan Thompson and Johan Mjallby to assist him.

Thompson’s appointment was short-lived but the partnership of Lennon and Mjallby stabilised the club allowing them to bring the robust confidence of their playing days to management.

The news then that the Swede will exit as Lennon’s No 2 will leave a significant void and no-one knows it more than the Celtic manager who tried in vain to persuade him otherwise.

Lennon and Mjallby grew into their roles after making their mark in the most successful Celtic side since Lisbon.

Although at first jittery in the role, he developed into a sage and powerful right-hand man to Lennon while helping transform Celtic’s defensive problems.

The example of Brian Clough and Peter Taylor at Nottingham Forrest was presented to Martin O’Neill and John Robertson who laid down new values at Celtic. 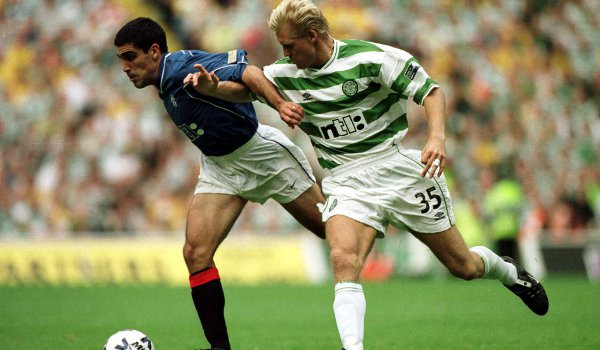 Johan Mjallby as a Celtic player in 2000

Clough himself once reflected: “When you enter an unknown world, which management was to Martin O’Neill, irrespective of the club or the level, you take someone you know. You take a pal. Just like I took Peter Taylor, Martin O’Neill took his best mate.”

When Lennon took on the role of Celtic manager, Mjallby admitted that he hung on for the call from his old team-mate. Under no circumstances did Lennon want a yes-man and the pair have debated and thrashed out success together.

Aside from three Scottish league titles, an undoubted highlight was the 2012/13 run in Europe with compelling wins away to Spartak Moscow and at home to Barcelona. Mjallby also convincingly handled press duties when called for, particularly when events outside the game prevented Lennon from doing his job.

The end of the current domestic campaign will see Hearts relegated and with Hibernian also facing the drop after an abysmal run of results, so it is perhaps understandable that Mjallby is in search of “different opportunities” with three of Scotland’s biggest clubs possibly playing outside the SPFL next season and perhaps for years to come.

Few could forget the player’s debut — the famous 5-1 mauling of Rangers in November 1998 was a precursor to the complete shift that would take place under Martin O’Neill.

He revealed a stoic conviction and desire that personified a new kind of foreign Celtic player. Gone were the badge-kissing Romeos whose tenure was short-lived and dysfunctional.

Mjallby’s family in Sweden provided further reasons for departure, but he didn’t leave before paying tribute to Celtic: “I have enormous affection for Celtic Football Club… the club has been part of my life for almost two decades and I have been dedicated to them in every way.

“I would like to sincerely thank all our supporters for all they have given me. They are special fans, the best I have ever seen in football.”

Lennon hopes to have a new No 2 in place for pre-season training on June 24.

LISTEN: One For The Bhoys - Celtic FC Podcast - Episode 2