The former midfielder, 57, returns to Boundary Park more than two decades on from his first spell in charge.

In a statement, the struggling League Two side confirmed Sheridan will take over with immediate effect, replacing interim boss Selim Benachour.

"Oldham Athletic can confirm that John Sheridan has agreed to return as Head Coach with immediate effect," read a statement from the Greater Manchester club.

"More details will follow next week but the club would like to thank Selim Benachour for his time in interim charge."

Sheridan made 34 appearances for Ireland, playing every minute of Ireland's four games at the 1994 World Cup, including a famous 1-0 win over Italy.

He takes over at Boundary Park with the Latics — one of the Premier League's inaugural members — bottom of the League Two table and seven points from safety.

Sheridan had two caretaker spells in charge of the club while still a player, the first in 2001 for one game before 13 games in charge in the 2003/04 season.

He took charge permanently in June 2006, reaching the League One playoff semi-final a year later.

Sheridan left in March 2009 but after spells at Chesterfield, Plymouth and Newport, he returned to Boundary Park in January 2016.

The club were five points from safety in League One when he took charge but nine victories in their final 22 games saw them finish 17th, eight points clear of the drop zone. 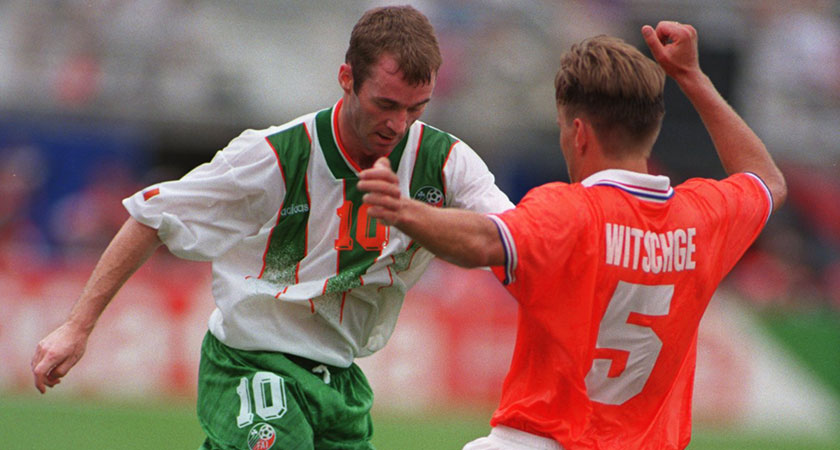 Sheridan in action for Ireland against the Netherlands at the 1994 World Cup in the USA (Image: Simon Bruty/ALLSPORT via Getty)

Sheridan departed at the end of the season for Notts County but returned in January 2017 less than two weeks after his sacking at Meadow Lane.

The Latics were bottom of League One when Sheridan returned, however he again led them to victory in nine of their remaining 22 fixtures to finish 17th, nine points clear of relegation.

However, he left in September 2017 after one win in the opening nine league games saw the Latics propping up League One.

Sheridan returns to Boundary Park after spells in charge of Fleetwood, Carlisle, Chesterfield, League of Ireland side Waterford, Wigan and Swindon.

With the Latics seven points from safety and with only one league win since October, owner Abdallah Lemsagam will be hoping Sheridan can once again work a miracle.

Relegation from League Two would mean Oldham having the unwanted record of becoming the first former Premier League club to be relegated into non-league football.