FORGET tokenism, like for like should be fighting it out for All Stars. If we’re trying to compare Nijinski with Shergar, stop trying to bring Bugs Bunny into the equation.

It’s an unenviable task to produce a 45-man shortlist for the All Stars because you can’t satisfy everyone, but we would like to see players in their correct positions as often as possible.

Some of the nominations are frustrating. Pat Donnellan is down as a half-back when his most exacting performances were at midfield, in both finals.

Clare teammate Conor Ryan, who wore nine to Donnellan’s six, was at centre-back in each of his four championship games but has been positioned based on his number.

Kilkenny’s Eoin Larkin wore 12 many times this year but the main reason for his nomination must be his excellent day’s work against Tipperary — at midfield.

In their next game against Waterford, the opposition scored 0-7 from that position while his wing-forward showings were far from the man we normally see.

In an overall sense, most are justified but there are some frustrating selections because, at the very least, you want to be able to compare players in their correct positions, and not be accommodating men in foreign roles: ‘Ah he (or said county) had to get one’. No, no he, and they, didn’t. The world isn’t what Louis Armstrong crooned about:

“I see trees of green, red roses too.
I see ’em bloom, for me and for you.
And I think to myself, what a wonderful world.”

Indeed it’s not. If it was, Laois’ Matthew Whelan or Cahir Healy — the June hurler of the month — would be in here based on the very positive reports of their performances this year. Tokens for some, not for all.

The thing with Donnellan and Healy is that their positioning at the edge of the D in some games creates an issue for those picking these nominations — they are not dealing with a direct opponent and there is not set position based on a traditional philosophy about the game.

As with the order of power in hurling, change is afoot inside the tactics room.

In Gaelic football, the lines have long been blurred because the 3-3-2-3-3 formation is all but defunct for most teams. In hurling, teams are trying new things but the rigidity endures enough to make these All Star 15s simpler than the big ball.

So, while we can, let’s battle it out between Conor Ryan and Liam Rushe for centre-back; Donnellan with Limerick’s Paul Browne and Johnny McCaffrey, who was better than his Dublin midfield partner who was named in his place, Joey Boland.

In the future, the 3-3-2-3-3 formation we mentioned may well be outdated, as 4-4-2 is often accused of being in soccer. The middle section, in particular, will become a thing of the past and that will be quite a change given how vital midfielders have been in recent years.

Think of Brendan Maher winning young player of the year in 2010, Michael Fennelly winning the senior honour a year later, and even Lester Ryan winning player of the league in 2013. In no other position does a dominant player have as much room to work, and that’s because there is three other operators in this sector rather than five. Galway flooded that area last year and Clare are one of a number of outfits to do so in 2013. 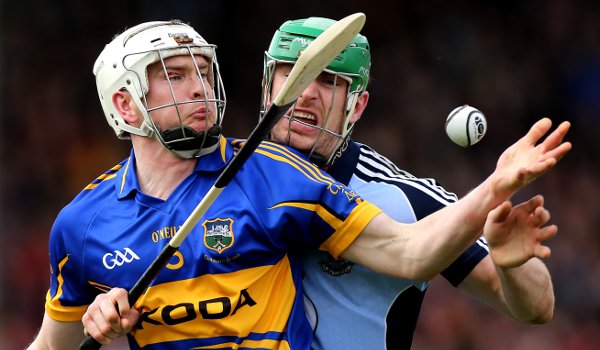 Or, to open it up a little more, it is one of the tactics Clare have been using. The Banner, and Laois through Healy, have often posted a man on the defensive D in the hope that the opposition are silly enough to hit long ball into an area where their big guns are outnumbered.

As it happened, both of these teams played against a Galway side that was naïve enough to put its foot right into the snare, though the O’Moore County didn’t have the firepower to capitalise. Eventually, Healy was given a more orthodox role within the 3-3-2-3-3 formation and the Tribe went on to win their Leinster semi-final.

The Banner deserved to win the All-Ireland because they were tactically versatile. As against Galway, they crowded out Joe Canning with Donnellan when they needed to because a key man had to be neutralised.

Their forwards will always roam, but they went closer to a 15 on 15 for the finals with Cork, knowing they had the better players and that their man-markers did not have to worry about anyone quite as marquee as the Portumna man.

Confidence also comes with belief and the win over Limerick, with Donnellan again safeguarding, brought that on to the point that they went more orthodox thereafter.

Clare’s big defeats this year came when the opposition pushed up on them; think Tipperary in the league and the Rebels in the Munster semi-final. It’s a dangerous game but it can sometimes slow down the Banner in the middle third; it will be interesting to see how Cork or Waterford look to match up with them in the provincial semis in 2014.

Or whoever they face in the league, be that the current format or the new eight-team top tier that threatens the future of not just those in the chasing pack, but any player outside of a county panel. This is the extreme case but consider this columnist’s own case as a club player in Dublin — albeit a Tipperary import — in 2013.

Cuala have been training since mid-January and have played a grand total of three championship games — with our group stage ending on September 29. That’s almost 10 months’ work, and a minor injury could throw that all of that preparation into the fire.

That’s what club players are dealing with and the situation is at its worst in dual counties where club hurling games are held up if the county football team is still alive, and vice-versa.

In 2014, the Dubs might play a minimum of seven league games before the knockouts begin, so where does that leave the club player who is already gasping for air? It tells him he doesn’t matter, even though 95% of those who play are outside the elite level. That’s not right and neither is telling 1B teams such as Wexford and Offaly that they don’t need to play against the better sides in the coming season.

Shane Dooley summed it up best on Twitter: “Just read about the new hurling league proposal! What a load of shit! If that goes through its a disgrace! #whochooses #unfair.”

Just because we’ve just had the best season ever and that is down to the best sides finding a similar level, that does not mean discarding the rest.

The nature of the GAA should be to nurture, starting with a club game that is only getting going now as the pitches turn to what Dooley calls the new league proposals: shit. Just like the All Stars, the fight needs to be fair.