Interview: Richie Towell opens up on his move from Dundalk to Brighton and his Euro 2016 prospects

The morning’s session has just finished and club captain Gordon Greer wanders over and playfully cocks his ear in the direction of the Crumlin man’s conversation.

Already the midfielder appears settled; at ease within the bowels of the club’s hulking facility on the edge of town.

But the second coming of Richie Towell to Britain feels somewhat overdue.

He was just 15-years-old when he joined Celtic from Crumlin United. It was a youthful move that brought the kind of name recognition that makes him feel older than his 24 years.

“I was only a kid [at Celtic]. It was a new challenge for me so I was probably a little bit apprehensive. It’s completely different now,” he says.

His time at Parkhead brought a loan spell at Hibernian before he returned to Dundalk. There, he blossomed under Stephen Kenny’s tutelage, winning two league titles and scoring the winner in last season’s FAI Cup final.

His performances and stunning goal return from midfield didn’t go unnoticed across the Irish Sea either.

The Dubliner was courted by a number of clubs before settling on Brighton.

“Coming here wasn’t a tough decision,” he says. “Obviously, I had offers to go elsewhere and to be fair I kind of had a good think about it and decided to stay in Dundalk because it was the best thing for my career.

“But as soon as Brighton came in for me I had a look at the place, the ambitions of the manager and the owner it was an easy decision.

“If I had of turned something like this down I think it would have been a step backwards in my career.”

However, making forward steps with a settled team competing for the Championship title has so far proved difficult.

At Dundalk, Towell was talismanic but his role in the English Championship since arriving has been frustratingly less than bit part.

“I think the most obvious thing would be the quality in the squad. I haven’t played as much as I’d have liked since I came here.

“I knew that was going to happen. I’m very realistic. Obviously, at Dundalk I played every week.” 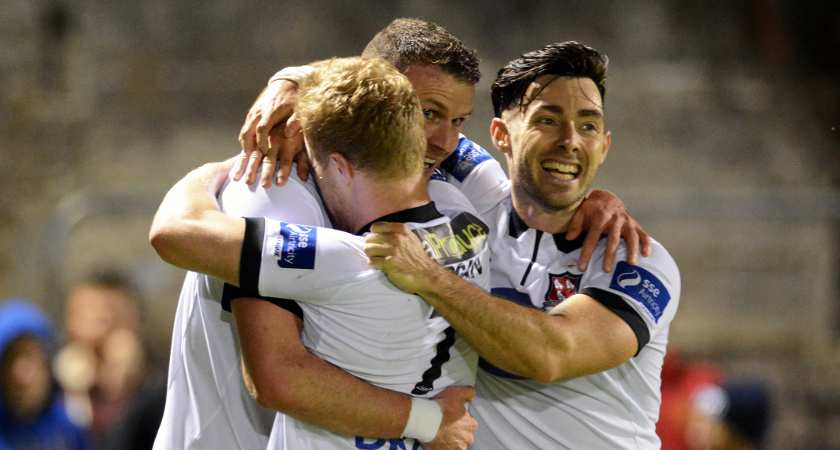 Towell celebrates a Ciaran Kilduff goal for Dundalk [Picture: Inpho]
Sat in shorts and T-shirt, Towell’s warm weather look complements his sunny demeanour. But surely it is being tested by this situation?

“It’s a hard one to take,” he says. “But I know that I have to work really hard, keep trying to impress the manager and keep pushing the lads for a spot and it’s something that I’m willing to do.

“I feel as fit as I have been in my career. I’m just ready to go, I just need to bide my time and be patient.”

If patience is a virtue, then the former Dundalk star possesses plenty. But in this sport and at this level, it’s a finite thing. Another few years and the Dubliner will be well into the second-half of his career.

The clock isn’t just ticking on his club ambitions.

Only now he’s out of sight.

“To be honest, it has probably been the furthest thing away from my mind. For me to think that I’m going to get called into the Euro squad is so unrealistic.

“As I said before I am a realist. I need to play here first. That’s been my one and only goal so thinking of the Euros would just be ludicrous.
“I have no doubt in my ability, I know I’m good enough to play in the Irish team but I’ll never get called up unless I play here first so that’s what I’m working hard at first and foremost.

“I have one goal and that’s to play for Brighton.”

Such a breakthrough would not be unprecedented for an Irish player at Brighton.

The late great Tony Grealish captained the Seagulls in the 1983 FA Final against Manchester United and registered 45 caps for the Republic. He too was a midfielder.

And despite the lack of game time, Richie Towell believes he’s improved as a player since leaving Dundalk.

“Definitely, I think my knowledge of the game has come on. Purely from listening to other players in the squad and the things that they have been through in their careers.

“These are players who have played in the Premier League. When they are chatting to you and telling you little tips, you are just taking everything on board because they have been there and done it.”

With Brighton now gunning for promotion, Towell is full of praise for the one person he simply has to impress – Chris Hughton.

“He’s really good. Not just his man management skills. But his training sessions. They’re brilliant, every single one since I’ve been here. I’ve really enjoyed them, there’s a great intensity to them, very professional in everything he does and it probably reflects where we are in the League. We are up there for a reason.”

But with the League of Ireland underway and the new challenge he now faces. Is Towell tempted to cut a wistful look back?

“You know, I need to look to the future and not be looking at what’s going on over there. Don’t get me wrong, I keep an eye on Dundalk of course. I speak to all my old teammates because I became really friendly with them so yeah I hope they go on and have as much success as we did last year. I try not to hold on to it. I think that chapter in my career is finished.”