CELTIC’S greatest right-back Jim Craig suggests his former club will win the Scottish league title despite their worst start to a season in 20 years.

He knows the pressure and weight of expectation that comes with playing for the Hoops, but he  feels the current generation are more than capable of stepping up and proving the critics wrong. 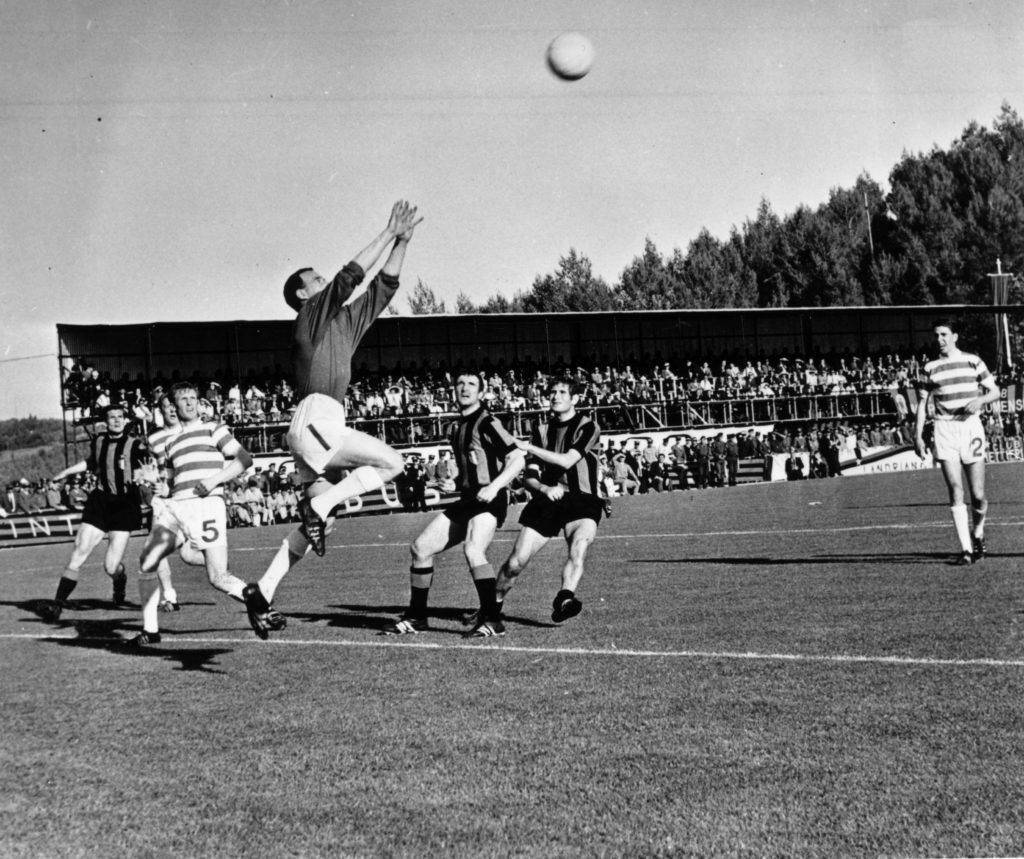 30th May 1967: Celtic's goalkeeper, Ronnie Simpson, jumps to catch a high ball from Inter Milan during the European Cup final in Lisbon. Tommy Gemmell and Stevie Chalmers scored for Celtic which ensured a surprise 2-1 victory for the Scottish team. Celtic became the first British side to win the trophy and remain the only Scottish side to reach the final. (Photo by Central Press/Getty Images)

Speaking to The Irish Post, he said: “Celtic have the best squad of players, everyone goes through a dip in form. The year after we won the European Cup, we went out the next year in the first round.

“We also had problems in South America so things don’t always go as smooth as you would like them to, especially after a period of success, but quality and class always rise to the surface and I think Celtic have more of that than any other side in Scottish football.”

He did admit that the much anticipated Treble Treble looked less probable. “Whether the other two cups will join them will be a different matter because during an afternoon or evening game you can have a low spot and someone is there to take advantage, that always can happen.”

The 75 year-old who wore the Number 2 shirt in Lisbon believes a third treble for Brendan Rodgers is going to be far harder than last season. 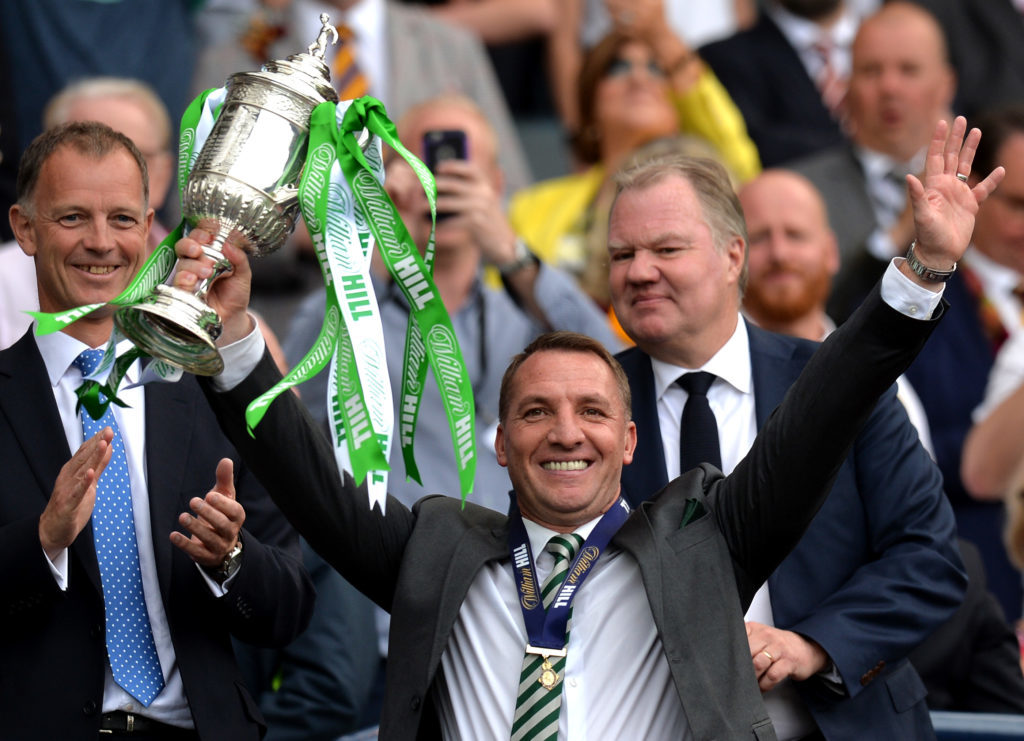 GLASGOW, SCOTLAND - MAY 19: Brendan Rodgers, Manager of Celtic celebrates with the Scottish Cup Trophy following the Scottish Cup Final between Motherwell and Celtic at Hampden Park on May 19, 2018 in Glasgow, Scotland. (Photo by Mark Runnacles/Getty Images)

“It’s difficult because people are gunning for you,” he said.

“We played sides the season after Lisbon and they were entirely different from the year before because everybody wanted to take a tilt at this team that had won the European Cup to show how good they were.

“They all raised their game on the day and that is what is happening to Celtic just now. Teams are raising their game even more so against Celtic and that makes life very difficult.

“To a Celtic player it’s just another game in terms of the league campaign. I don’t mean that critically but to these other teams, they are meeting the team that has won two trebles on the trot so they are well fired for up for it, this is a tougher proposition than normal.”

Last season the Lisbon Lions celebrated the 50th anniversary of the club’s greatest achievement. Jim Craig was one of the few able to undertake the many media requests for interviews with a number of players having passed away or unable to discuss the achievement due to age or ill-health.

He remains philosophical about the fact referring to an exchange with a Celtic fan last season.
“I met a guy coming out a match one day in Perth. He said: ‘What do white rhinos and the Lisbon Lions have in common? They’re both endangered species’. 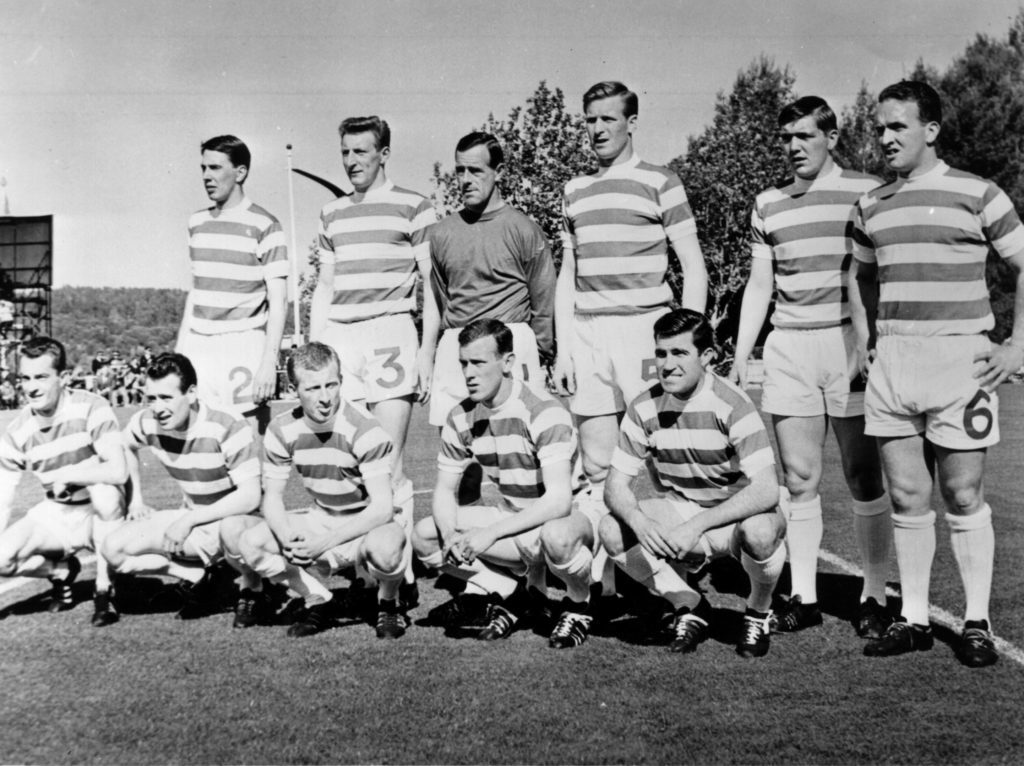 25th May 1967: The Celtic team line up before their European Cup Final match against Inter Milan in Lisbon. They went on to win 2-1. (Photo by Central Press/Getty Images)

“When you hear something like that your initial reaction is to laugh. But it puts things in perspective.

“It’s been amazing to talk about this moment in Scottish football that put Celtic among the big boys in Europe. No other team in Scotland has done anything like it since.

Aberdeen and Rangers won the Cup Winners Cup but the European Cup/Champions League is the big one.”

Famously the right back gave away a much contested early penalty early during the final of the 1967 European Cup but today Craig suggests that could have been the catalyst in winning the match.

“In terms of the final it’s very hard to get through the Catenaccio system, you get past one man and there is another one waiting for you.

"They did that really well and of course me giving away a penalty in seven minutes, I never ever thought it was a penalty. I think in some ways that helped because it made them go back into the situation they were comfortable with, which was sitting back.

“It meant we got the ball and won 80 per cent of the possession, the penalty might have put us one down but it gave us enough to do something with it. We made the break through and it ended happily.”

Undoubtedly there was a palpable tension in the stands after the penalty was given before the eventual 2-1 win. 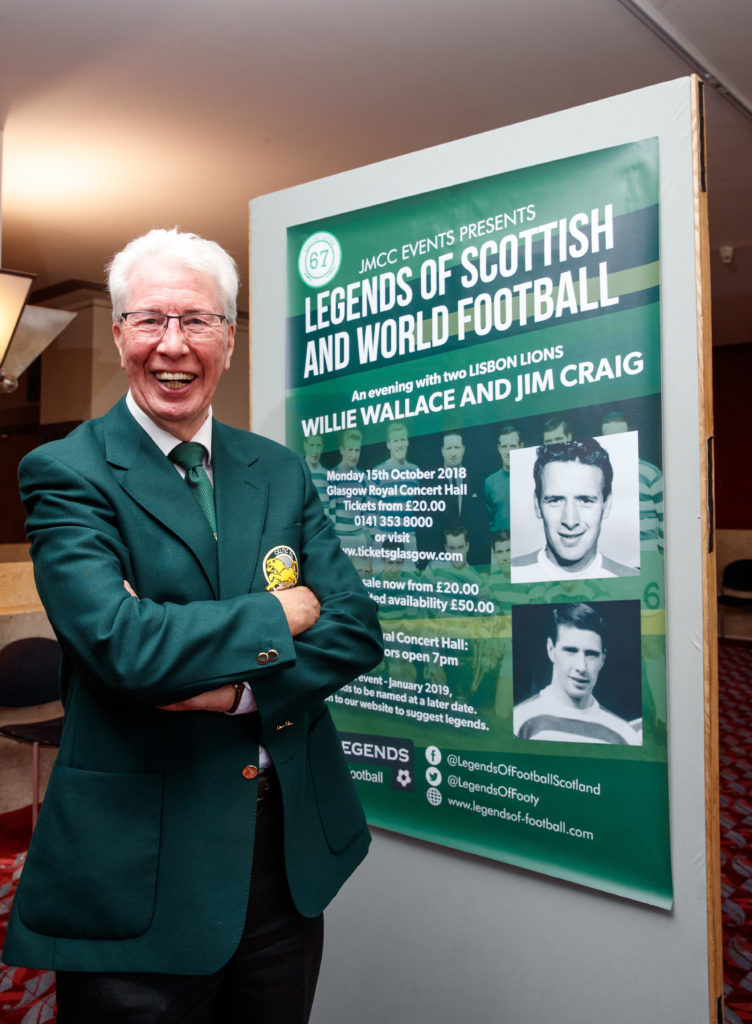 Craig also revealed that his father has wanted him to be a Hibs supporter.
“He was Leith born and bred and was Hibs all his days. He took me to see Celtic in the St Mungo Cup final against Aberdeen and that’s when I became a Celtic fan but Hibs were always my second team.”
Significantly Craig’s last game for Celtic was the Scottish Cup final against the Hibs. The Edinburgh club were hammered 6-1.

“They were a very good side but they had a serious problem; they tried to play football against Celtic and that suited us. It meant they were open. There is a time to shut up shop no matter how good you are, you have to sit back and absorb.”

The Hoops next match will be another difficult proposition against Hibs. A rejuvenated side managed by Neil Lennon caused Celtic problems last season. With both sides enjoying 6-0 wins at the weekend, it looks to be a competition to savour.

Jim Craig will appear with Willie Wallace at the Legends of Scottish and World Football event in Glasgow’s Royal Concert Hall on October 15 at 7.30pm.

Tickets are available from www.ticketsglasgow.com