LONDON manager Ciaran Deely has blasted the GAA’s latest proposal for a restructure to the Senior Football Championship.

Under the potential new terms, which will be put to delegates at the next meeting of Central Council, the quarter-final knock-out stage would be replaced with a group stage process, with two groups of four.

The round-robin format, which is the most notable change of the mooted shake-up, would see each of the last eight teams partake in one home game, one away game and one game at Croke Park, but Deely believes the move is a ‘big money spinner’ for the GAA.

The governing body have promised to ring-fence the extra income from gate receipts and TV money from the extra games and re-invest it in improving weaker counties, but Deely is not buying into the idea.

Croke Park have themselves claimed the proposal as a ‘far-reaching’ plan that is designed to give the club scene ‘room to breathe’, but not everyone is buying into their plans.

Not least, the managers of smaller counties, who were hopeful the GAA would come up with a viable proposal that could see them close the growing gap between themselves and the more marketable teams at the higher end of the scale.

Although Deely is appreciative of the GAA’s recognition of the need for change, his full assessment is a damning verdict.

“Though welcoming the debate and discussion on restructuring the Senior Football Championship, as I believe it is much needed, I fail to see the benefit to smaller, weaker counties of playing a round robin of games at the quarter-final stage only,” said the Wexford native.

“This seems to me like a half-hearted proposal from Croke Park to reinvigorate the stagnating championship. Extra games at the quarter-final stage will be fantastic for the elite counties involved, for fans of seeing the big teams clashing more often and of course, the bank balance of the GAA.

“I struggle to see the benefit, however, to the much ignored clubs, club players, and smaller inter-county teams who can only dream of reaching the quarter-final of the championship.

“Surely, when looking to restructure a competition, you look to increase the volume and quality of games for all teams and not just the elite. This proposal will serve only to increase the gulf in class even further between the so-called big and small counties.” 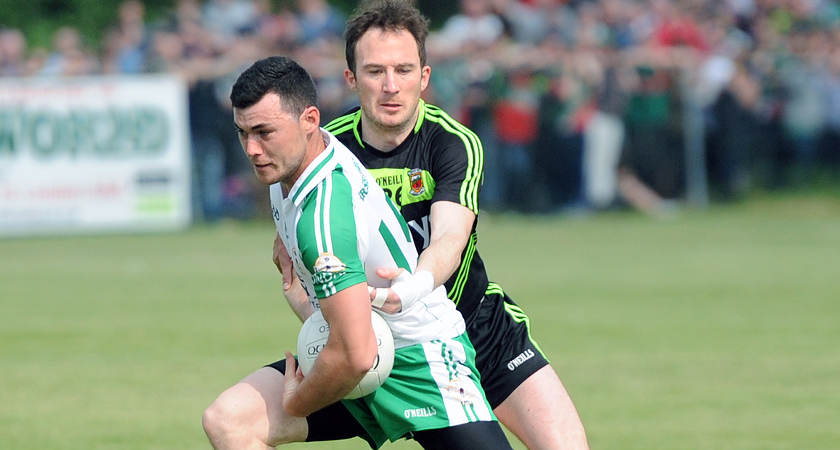 Patrick O'Hara of London escapes Mayo substitute Alan Dillon [Picture: Mal McNally]
The addition of a group-stage in the middle of an otherwise knockout tournament baffles Deely, who believes a similar idea would make more sense in the early stages of the All-Ireland series.

“I do not know of any other competition in the world, in any other sport, whereby you have a near-knock out competition, followed by a round robin of matches at only one stage of the competition and then revert back again to knockout.

“Surely it would make sense to begin the competition with a multitude of matches for every county groups, followed by knockout competitions for each county at their own levels. More, better games against teams of similar and slightly better ability, in a much tighter season is surely the answer to reinvigorating the championship, developing weaker counties, and aiding the plight of the much ignored club players.

“From a London senior football team perspective, I know the players would have loved to have played more championship games in the height of the summer, which would have aided their development and progression as individual players and as a team as a whole, but alas our, and many other county teams also, season ended after just two championship matches.

“I admire Páraic Duffy and believe he is a progressive, good man, but if Gaelic football is to keep developing and maintaining its position as the number one sport in Ireland, then more courage and foresight is needed to implement a more radical restructuring of the championship that will benefit all teams and the sport as a whole.”