RONAN O’Gara says the decision to stage Munster’s Heineken Cup semi-final against Toulon in an unfinished stadium was “staggering” and “a disgrace”.

The Stade Velodrome has had its capacity reduced from 60,000 to 40,000 while redevelopment works at the ground continue.

“To have a game of that importance in a stadium with one whole stand malfunctioning is a disgrace,” O’Gara told Today FM. “I couldn’t believe it when I arrived in the ground. It was staggering, really.

“There’s a lot of planning for these things. There were over 10,000 Munster supporters there and they deserved better than that for a team they’ve supported for the last 15 years.

“A set piece on that side of the pitch and there’s no vocal support? Players feed off that.

“Both sets of players deserved better than that for getting to such an elite stage of the competition.” 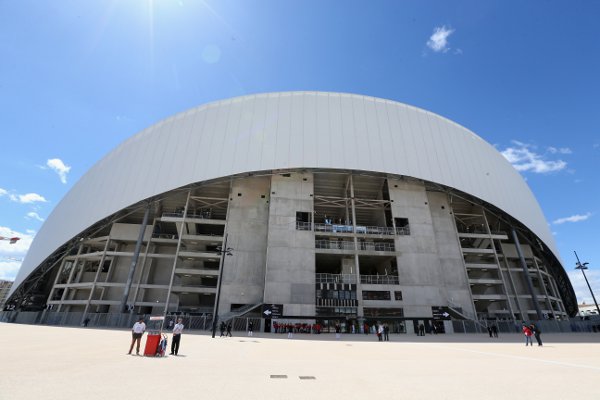 The unfinished Stade Velodrome on Sunday

Munster lock Donncha O’Callaghan was not impressed with the stadium but did not feel it gave either side an advantage.

“It’s a bit odd for lineouts,” he said. “One side is going crazy and the other side you can hear the coaches abusing you so it’s a bit different.”

O’Gara believes that a high error count was central to Munster’s defeat.

“Munster were always going to have purple patch and the disappointing thing from their point of view was to give them a nine-point lead at half-time, considering Munster made four or five errors that they usually wouldn’t have,” he said.

“That’s what happens at this level. They don’t intentionally drop a ball from a kick off or don’t knock on a ball in their own 22 and give away a penalty but when you’re stressed, these things happen.

“[Delon] Armitage then kicks a penalty from inside his own half and it’s nine points, an unbelievable kick.

“At six points, Munster probably go on and win the game.

“It was great to see the reaction of the players afterwards because they are not happy getting to a semi-final and that’s the attitude of a winner.”

Paul O'Connell: 'We have got to repeat our performance at Toulouse'