CUNNING-MAN: Galway boss Anthony Cunningham is looking for his side to go one better than last year

IN the past 12 months, Anthony Cunningham has faced Brian Cody three times when it mattered most and — unlike so many who went before — emerged with his reputation enhanced.

There was a win, a draw and a defeat — except the draw, in last year’s All-Ireland final, still feels like the one that got away.

Memories of that September day — when Galway blew a first-half lead and an All-Ireland — forced Cunningham to spend a winter losing sleep and losing confidence… before spring returned and brought optimism with it.

And even though Galway had one of those topsy-turvy League campaigns, he isn’t worried.

“Plus, this year we weren’t fresh. We had under-21 stuff going on, club stuff, colleges, guys double-jobbing. We’re coming good now.”

Yet there is no great rush.

Laois — Galway’s opening-night date — represent the type of opposition shrewd boxing promoters come up with, when a previously unbeaten fighter is on the road back after the first loss of his career.

They’re plucky but limited and it’s patronising to suggest otherwise.

And yet they — and he — will be harshly judged even if they do.

Since getting the job 18 months ago, Galway have won a Leinster and a hell of a lot of respect but we are wondering if they are good enough to move onto another level.

For his part, having studied the strong elements of everyone else’s game, Cunningham has realised he has the players, and the tools, to beat anyone.

“They are outstanding. They are champions for a reason but we learnt so much from our encounters against them last summer. We beat them. We drew. When we drew, we didn’t put it away. That’s a lesson. The key is whether we can learn from our mistakes. If we can…”

If they can, they’ll be Galway’s first champions in a quarter-of-a-century: “Can you believe it is that long?” he asks.

Even in a sport where the playing pool is so shallow, the greatest lack of depth belongs to a Galwegian hurler’s soul.

Their flakiness is renowned. They’ve had the chances, had the players, but haven’t bred winners.

Cunningham’s job is to change all that.

“It is up to us really to push on. Last year was good for us, good in terms of building our confidence and experience to get the chance to play big games in Croke Park and learn all about that pressure. But it will only be good for us if we grow. We can’t stay still.

“People out there want new champions. They want Galway, Clare, Wexford, Limerick or even Cork, to re-emerge because the sport is such a fantastic game and people want variety to keep it interesting. But that’s not Kilkenny’s fault. They’re excellent.

“But even though I admire them — I wouldn’t subscribe to the view that this year’s League final [between Kilkenny and Tipperary] is a dress rehearsal for September. Anything is possible.” 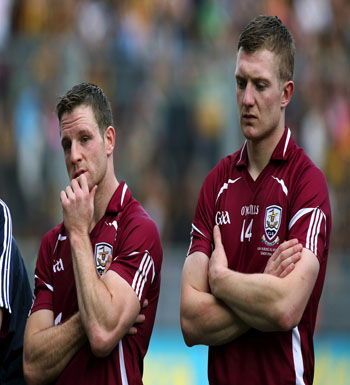 This belief in the improbable has been honed over a long period of time.

As a player, he was good enough to win a couple of All-Irelands but as time passed and the legs slowed, the mind raced.

“If there is one thing I wish I could have, it would be the capacity to be 21 again,” he says. “But that can’t happen. Coaching can.”

Yet to coach at the level he is at has required a lot of sacrifice.

First, this ‘hurling fanatic’ had to get a job. St Brigids — the Roscommon footballers — were the only ones to open the door.

Two Connacht Championships enhanced his reputation, leading to a move across town, and the Westmeath border, to coach Garrycastle.

There, we began to catch a glimpse through the window of his personality, noting firstly how in the week after an Achilles operation, Cunningham took a training session on crutches before catching a train from Athlone to Galway to supervise a session with the Galway hurlers.

By now, he’d caught the eye of hurling’s community, taking Galway to an Under-21 All-Ireland — and a day he was on duty with the Garrycastle footballers.

This mixture of achievement coupled with dedication convinced the County Board he was ready for senior management.

“Anthony’s a very good man manager,” John O’Mahony, the two-time All-Ireland winning manager, who worked with him at St Brigids, says. “He wouldn’t be confrontational but he has a steely determination about him. He would listen to advice and take soundings — that was my role. He works with people as a team.”

Last winter, his work concentrated on addressing the physical deficiencies within Galway’s make-up.

The intensity of their training gave them belief that they could last the pace with anyone.

Now, though, he has to work on their minds.

“To try and challenge the greatest team of all time is where you want to be,” Cunningham says.

“I find it very enjoyable. There will always be roadblocks and issues along the way. That comes with the territory.

“But I’m happy with where we are. On reflection, we failed — as a system — to put Kilkenny away from a winning position last September. But on mature reflection, the only team who beat us was the All-Ireland champions. Our burning desire is to rectify that.”

To do so, he has worked on a new strategy to get more out of his forward line.

Like last year, Galway’s League games have been subject to rigorous video analysis, with five different cameras being positioned around the grounds to monitor movement.

New training techniques have been introduced along with new players.

They have eyes for one prize… and one team.