WHILE June 21, 2015 was officially the longest day of the year, the previous Saturday felt that way for Martin O'Neill.

He can't have slept much that night, not with the events of Ireland's 1-1 draw with Scotland circling around in his head, not when those outside the camp considered that day to be the end – certainly of Ireland's campaign, possibly O'Neill's reign.

No one was mentioning a new contract then and very few were talking about qualification. Instead Sunderland entered the narrative. O'Neill's one (alleged) managerial failure was brought back as evidence for the prosecution. Had his ideas passed their sell-by date? Was he yesterday's man?

Tellingly, Leicester City didn't think so. They made an approach that same month and offered him a way back to the Premier League. An out. Yet he didn't take it.

"If there is one thing about us," John Delaney told me in 2013, "it's that we don't interfere. We allow our managers to manage. We let them get on with it."

In O'Neill's world, after the hurt and humiliation of Sunderland, these things mattered. He liked the Ireland job, believed in the team, and in the prospect of making it to France.

The trouble was, very few shared his confidence.

By September, things had changed. With footballers, it is their capacity to forgive and forget. A new season had come around and some – Darren Randolph, James McClean, Robbie Brady – were at new clubs with new found confidence. 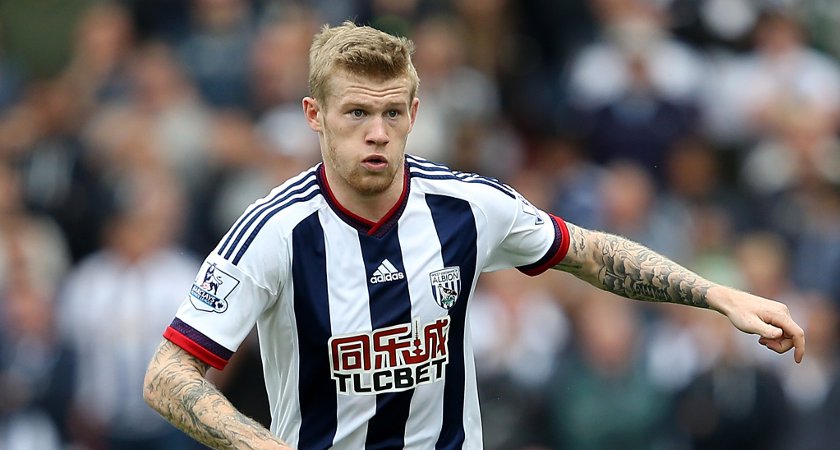 James McClean returned to top flight football in August [Picture: Getty]
Others had stayed put, or more to the point, were going nowhere. Their inactivity was noted, their starting positions were taken away. "The thing about Martin," a dressing room source said, "is that he hasn't lost it with the players yet. They haven't seen that side to him. But they don't want to."

So the players didn't, and still don't, complain. Privately they may moan, one or two of them. O'Neill's team speeches – which have been spoken about in glowing terms by many of his former players – haven't impressed every single one of the current gang.

Tactically, he doesn't deliver the same level of detail that most other Premier League managers do. And his team selections, hugely varied from game to game, have left some players perplexed.

Yet by the autumn they were working. Randolph got his chance and took it. The fact that he, Ciaran Clark or Richard Keogh, heroes in the play-off games against Bosnia-Herzegovina, had barely featured up until then, didn't seem to matter.

Unlike Giovanni Trapattoni, who stubbornly refused to acknowledge when a man's time was up, O'Neill was open to change. In fact, he seemed addicted to it. No one team was the same as the next throughout the campaign and while inconsistent selections led to inconsistent performances from September 2014 through to June, by the start of this season, the chop-and-change policy was beginning to work.

"If players aren't getting in with their clubs, I have to consider that," O'Neill said.

And so Aiden McGeady, the man whose goals stole the points in Tbilisi, paid the price for his inactivity. Likewise Darron Gibson. David Forde, the number one at the start of the campaign, discovered midway through the Germany match that he was now no more than a number three.

Randolph had jumped the queue. "There is a thin line between loyalty and stupidity," Roy Keane, O'Neill's assistant, said.

Yet while no one in the Ireland camp considers O'Neill stupid, plenty see him as loyal, even though the evidence suggests otherwise. This campaign, remember, has seen him drop Robbie Keane, the first time the captain has been demoted by an Ireland manager since 2001. 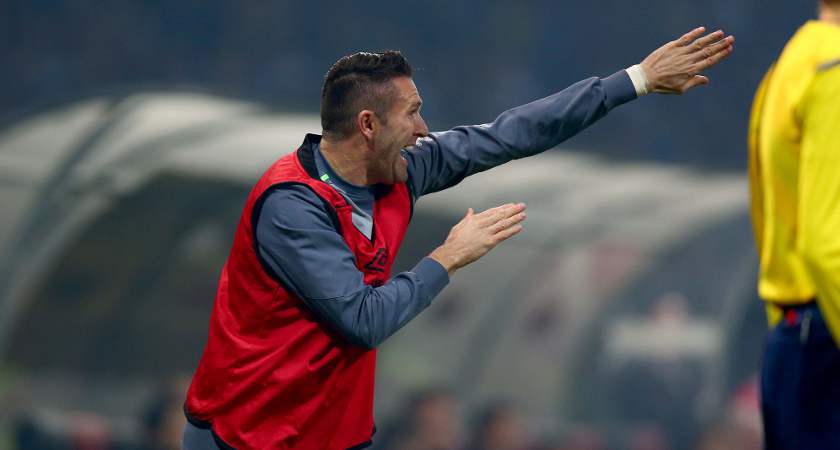 Robbie Keane lost his place in the side but is influential off the pitch [Picture: Inpho]
Forde, Marc Wilson, Stephen Ward, Wes Hoolahan, James McClean, Jeff Hendrick, Cyrus Christie, Keogh, Gibson, Stephen Quinn, David Meyler, Shane Long, Daryl Murphy and McGeady have all come in and all gone out of the side. Just three players - Seamus Coleman, Glenn Whelan and James McCarthy - started every game when available.

Even Ireland's best two players in the campaign, Jon Walters and John O'Shea, weren't spared the bench, Walters sitting there for the second group game against Gibraltar, O'Shea for the second-leg of the play-off against Bosnia.

Tellingly, though, no one has spoken out of turn. "They're scared to," one recently retired player said. "They don't want to get the sharp end of Martin's tongue."

Glenn Whelan got it. Substituted at the tail end of Ireland's play-off win, he appeared unhappy. "Well, he shouldn't be," O'Neill said afterwards. "We're just after qualifying, he was captain, he got 90 minutes, so there is no need for him to have the hump."

Other times, a softer approach worked. Roy Keane, in particular, has been impressed by the way O'Neill communicates certain decisions, especially around double-headers, where Wes Hoolahan was – as an unwritten rule – omitted for the majority of away games while James McClean tended to miss out on the home ones.

Yet they were told why. O'Neill was aware of the impact McClean and Long could make from the bench and for all the clamour for Hoolahan to be picked for the road trips, the reality is that when he finally was – in Bosnia – he didn't play well. 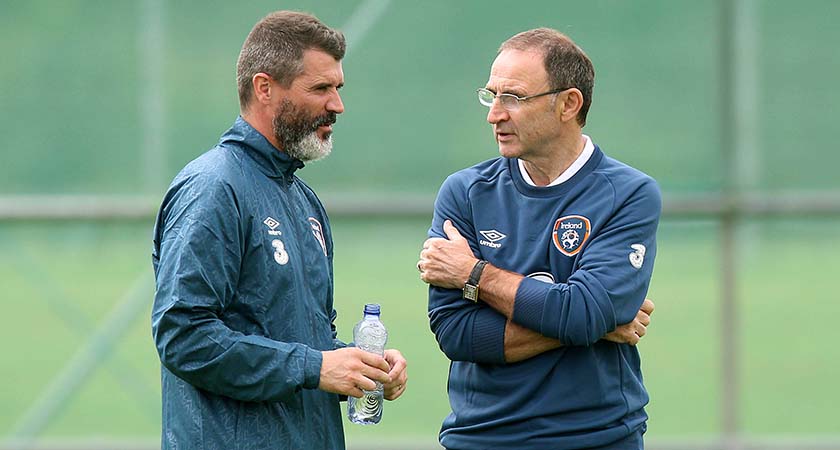 Roy Keane (left), O'Neill's assistant [Picture: Inpho]
The key is that it is not important whether the players like the manager's decisions, but whether they have faith in them. After drawing with Scotland, doom and gloom pervaded elsewhere but not in the dressing room.

"Martin drew up a chart in one team meeting," Walters said. "It was like lines on a graph – full of peaks and troughs. 'This is where we will end up,' he said: 'France. But along the way, we'll have ups and downs. That's football. It won't be smooth but we can get there'."

After September's double header – when Georgia and Gibraltar were beaten – the road ahead looked clearer. Tellingly Scotland lost twice that month – in Tbilisi and at home to Germany. "Believe," O'Neill told his players before the Germany game. And they did.

That night was the turning-point because for all the talk about O'Neill's great achievements from the past, this generation of players needed to experience a present day miracle. Footballers are like that. Results, more than words, convert them. With the scalp of the world champions added to his CV, O'Neill had shaped the mood not just of the players but the nation.

Significantly, and possibly by default, he'd discovered his best team. Randolph looked like a younger and more mobile version of Given; Keogh and Clark appeared more assured than O'Shea and Wilson; Ward and McClean were picked for the games when it was blindingly obvious that Ireland needed as much height as possible, Hoolahan for the days when a defence-splitting pass was the priority.

Other left-field decisions paid-off. Murphy finished the campaign without a goal – but provided assists for Walters' strikes against Scotland and Bosnia (the penalty). Hendrick, low on confidence initially and poor against Scotland in Glasgow, felt empowered when O'Neill picked him again and again after that trip to Celtic Park. His creativity, remember, led to Walters' winning goal against Georgia in September.

O'Neill handing out instructions during the 1-0 win over Germany [Picture: Inpho]
And then there were 'the little details', a catchphrase from the Trapattoni era.

In the week of the play-offs, the ground staff at Abbotstown, Ireland's new training centre, repeatedly cut the grass to the same level day after day. No one really knew why and no one asked. The instruction was given and Roy Keane made sure it was carried out.

Then, the night before the second-leg, Bosnia trained at the Aviva, leaving the stadium at 7.30pm. Five minutes later, the groundstaff got their mowers out, cutting the grass to the same height as the training surface at Abbotstown.

"Does this thing make a difference?" an Irish insider said. "Who really knows? But the idea was that, subconsciously, the Bosnians had got a feel of the surface the night before the game. In their heads, they expected the ball to travel at such and such a speed. By match night, the surface had changed slightly. It was that tiny bit slicker. Do these things matter? Well if you remember the first goal, we got a penalty from a throw-in. That throw-in, remember, one of their players [Emer Spahic] got caught with the ball at his feet and panicked a bit. He tried a pass that didn't come off. We got a throw-in, then a penalty, then a goal. Did that come down to us getting the grass cut? It's a question no one can answer. But sometimes in sport, little things make a big difference."

And sometimes big personalities make a bigger difference. For years, Roy Keane was considered a pain in the FAI's side and Robbie Keane's value to the team was never accurately calculated. This campaign, though, saw that change. In Robbie Keane's case, his input was increasingly from the sideline. Age had caught up on him yet he still played his part.

"If training isn't sharp, it's my job as captain to say something." He did. O'Neill had a de-facto backroom member. The other Keane, meanwhile, had his own say. Premier League clubs and managers, as a rule, don't want their players reporting for international duty carrying knocks.

Keane didn't care. As the campaign went on, he became noisier on this issue and, more than anyone, got McCarthy to buy into the international side. If the Irish international department could be accused of being too soft with Premier League clubs before, no one can say they are now. Witness how Long and O'Shea returned from injuries for the play-off second-leg.

"When it is international week, they're our players," Keane has said in private conversation. "Roy's attitude is this," said the insider. "He's a winner. There is drive there. That rubs off on everyone because he chases the little victories, getting players released, getting that edge in terms of the surface. He won't let anyone bully him or his team."

It showed. Once this team looked like it was going nowhere. Now it is on its way to France.

The 2015 London hurling season in review