MANCHESTER UNITED'S Portuguese superstar Cristiano Ronaldo has claimed that if the club finishes outside the top three this season then it will be a failure.

The 36-year-old has insisted that United's young side must change their mentality if they are to win silverware and improve on a poor run of results.

The five-time world player of the year has backed his new manager Ralf Rangnick to get the club higher up the league, but admits that it won't happen overnight.

United beat Villa in the FA Cup this week and lost to Wolves in the previous game; these were examples of United's staggered form. The club lie seventh in the table.

Cristiano Ronaldo says that #MUFC should not accept anything less than a top three finish in the Premier League this season.pic.twitter.com/wKVHPiGCQt

"In my heart, I don't accept that our mentality is less than being in the top three in the Premier League, in my opinion.

"I think to build up good things sometimes you have to destroy a few things. New year, new life, I hope that Manchester can be at the level people want, especially the fans. We are capable of changing things now.

"We can do it better, all of us. I don't want to be here in the club to fight to be in sixth or seventh place. I am here to try to win, to compete. I believe if we change our mind we can achieve big things."

Ronaldo was also pushed by the reporter at what United have to do get going and said:

“I remember when I was 18 some older players spoke with me and I took that as having to improve, they know more than me as they have more bad moments. This new generation in general don’t accept that if you criticize them. I have kids I know. They do the opposite.

“I don’t say our players but in general. You have to find the right balance to speak with them. It’s a new year and we have to change the page. We have many things to win. We have to believe that or it will be a nightmare.

“I’m here to help. When they need my support and advice, I will be the number one to help.

“If you don’t want my help and my advice, do your job, look at yourself. Do your best to help the team.” 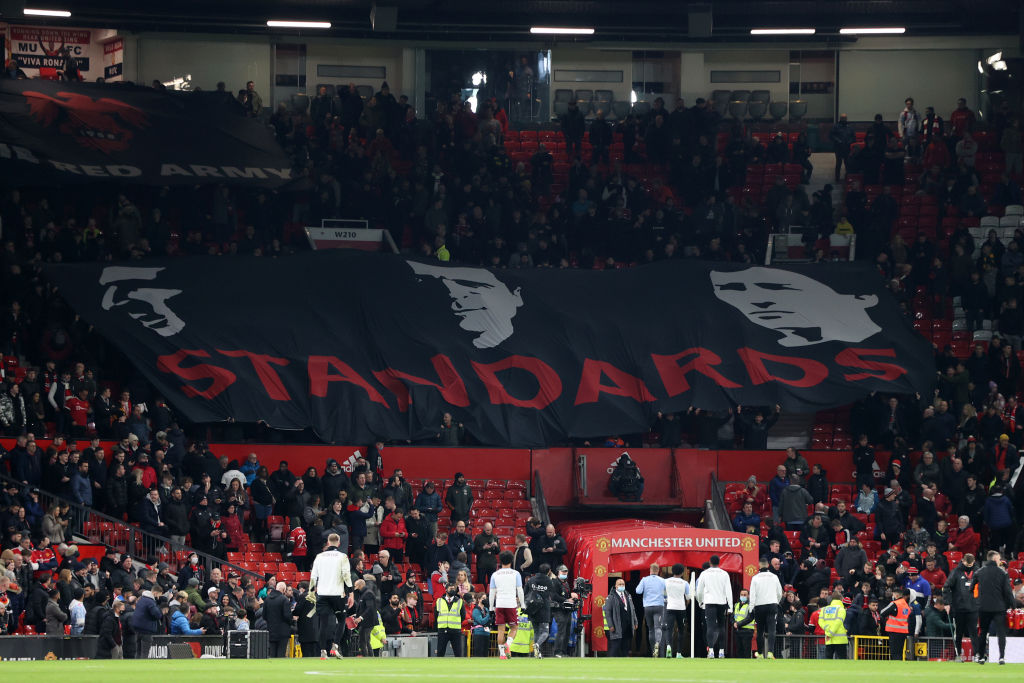 MANCHESTER, ENGLAND - JANUARY 10: A flag saying 'Standards' is seen during the Emirates FA Cup Third Round match between Manchester United and Aston Villa at Old Trafford on January 10, 2022 in Manchester, England. (Photo by Clive Brunskill/Getty Images)

Harry Maguire liked a post about Cristiano Ronaldo being ‘upset’ by a wage cut', Maguire said 'he liked post in error'