THE French media have begun their inevitable mind games ahead of Sunday’s huge clash with Ireland, and Johnny Sexton appears to be their chief target this time around.

Ireland have faced France at the World Cup on three occasions – 1995, 2003 and 2007 – and each time they have suffered defeat, but the matches have often been lost mentally before taking to the pitch thanks to unsporting tactics from the French press.

With Ireland being the bookmakers’ favourites for their fourth World Cup meeting – because they’re unbeaten the last four games between the sides – France are once again looking to gain a mental edge.

And we’ve been here before. In 2007, unsubstantiated claims were made by a French newspaper about Ronan O’Gara’s private life, suggesting a breakdown in his marriage and a sizeable gambling debt made the fly-half vulnerable ahead of their showdown.

Yet it simply wasn’t true…

There were lots of rumours and they all come to nothing. What was written about Ronan O'Gara during the World Cup was a disgrace, a slur on the journalist that wrote it rather than him. You can't win in these situations. All you can do is let the truth come out eventually.
Former Ireland boss Eddie O’Sullivan reflecting on Ireland’s defeat to France at the 2007 World Cup 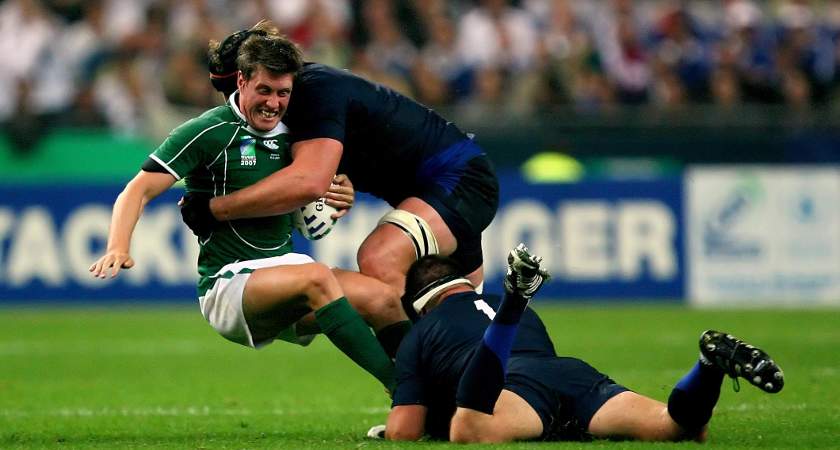 Ronan O'Gara against France in 2007 [Picture: Inpho]
In some cases, though, Ireland’s inability to cope with off-field pressure from both sides of the media has proved their downfall against France, as was the case in the 2003 World Cup.

Psychological issues as much as physical ones help explain that early exit. Emotionally, they were running on empty by the time the quarter-finals came around. The French knew it too, exposing the lack of pace in Ireland’s back three to devastating effect. With 48 minutes gone, it was 37-0 and while Ireland’s response – scoring 21 points in the remaining 32 minutes – was commendable, the reality was those late scores had simply covered over the cracks of an abysmal display.
Irish Post columnist Garry Doyle on Ireland v France at the 2003 World Cup

Now, Leinster fly-half Sexton appears to be the target of the French, with their media and his former club colleagues spouting slurs about his time with French club Racing.

Sexton spent two years with the Top 14 outfit before returning to Leinster this summer, and his former coach has begun stirring the pot by giving his personal assessment of the Irishman in an interview with this week’s edition of Midi Olympique, a French bi-weekly newspaper specialising in rugby.

When things didn’t work as he had hoped, he was hyper sensitive. Several times I had to remind him that there are certain ways of saying things. Jonathan had the tendency to employ a strong manner and a very colourful language in the heat of the action. Sometimes it was on the verge of insult. At times, Jonathan was really uncontrollable. When we ran plays, if someone forgot his role, he was capable of giving them a bollocking. No matter what had happened before, he gave them a roasting. Sometimes I tore out my hair. Johnny is someone who is perpetually putting everything in question, and who obliges you to be constantly on alert.
Laurent Labit, Racing Metro Coach, on Sexton’s stint with the club 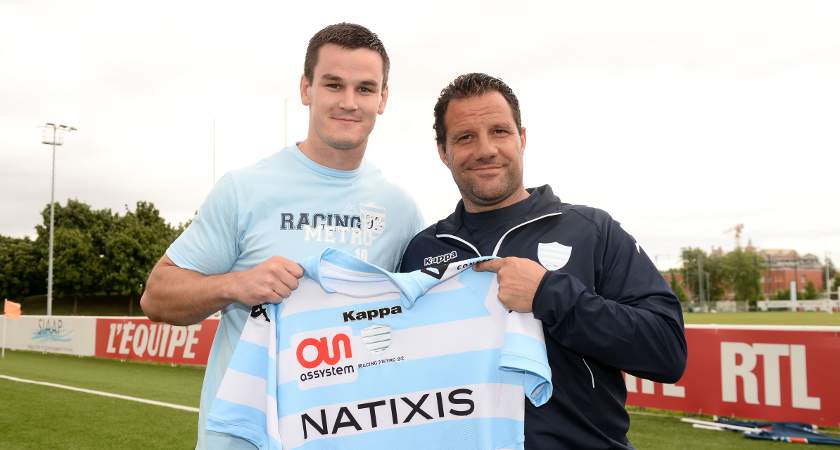 Sexton with his old Racing coach Laurent Labit [Picture: Inpho]
The article also included quotes from an unnamed former Racing team-mate of Sexton who compared the 30-year-old to soccer super-star Zlatan Ibrahimovic, the Paris-Saint Germain striker who is renowned for showing his frustration with his team-mates when they’re unable to match his world-class ability.

With a bit of luck, the Ireland camp won’t fall for the off-field tactics this time around, and the early indications are that the reports are not playing on their minds, with Sexton’s team-mate Devin Toner leaping to his defence.

He's just another player with us, he's not big-time. He's the 10 who runs the show but that's what we want. He's not big-headed, he's a very down-to-earth guy so we don't recognise that at all. He's the same as he was before he went to France. I've played with Sexto since schools' rugby so I'm pretty used to it to be honest. They mustn't have been used to that in France, but it's a hugely positive thing for the team. He drives the lads to be better, and you want to be better when you're playing with him. If I'm not in the right place and I hear someone screaming at me, I know I'm not in the right place and I'll think in my head 'I've got to get that right next time'.
Devin Toner, current Ireland team-mate of Sexton

In other words, Sexton is no diva, he’s a winner.