MANCHESTER club St Brendan's ended their 25-year wait for another Lancashire Senior Championship title with a 2-11 to 0-16 win over Liverpool's John Mitchels at Old Bedians on September 19.

The landmark win follows the club's League Final victory over Mitchels in July.

When Brendan's last won the Championship in 1996, it was their 19th success in 32 years.

So after a quarter-of-a-century wait for title number 20, it was perhaps fitting that Colm Conway fisted the winning point for Brendan's deep into injury time.

Colm's father, Mayo native Mickey Conway, was part of that victorious 1996 side and he was at Old Bedians to see his son follow in his footsteps. 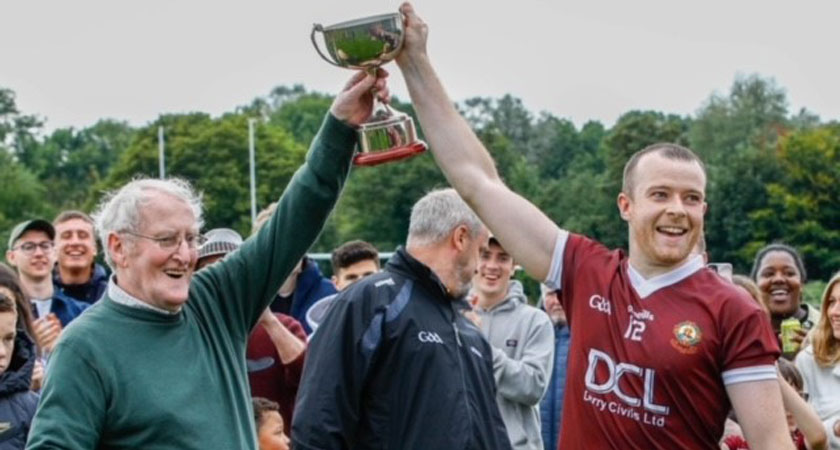 Brendan's has always prided itself on having a strong underage structure and Stephen Moriarty's side took to the field with three Mancunians in the starting line-up.

However they lined out in their new all-maroon kit — kindly sponsored by Derry firm DCL — without Mancunian man-mountain Niall Connolly, who had picked up an injury in the semi-final defeat of Oisins.

Although the Brendan's defence was well-marshalled on the day by Chrissy Ryan and Paddy Fox, they found themselves behind early on through two points from Mick Molloy.

Paddy McCoy responded with Brendan's first point of the afternoon just before the water break, before a Ryan Devine point from play drew Brendan's level.

Pete Lavery edged Mitchels ahead again but then came a brilliantly worked Brendan's goal, which started deep in their own half.

Michael Collins found Callum Gribben with the sideline ball and he played a neat one-two with Owen Clarke.

The Down man managed to get himself out of a tight spot before a marauding run down the pitch saw him pick out Tomas Ryan.

His trusty left boot found Devine who picked out Ethan Gibson on his shoulder, who in turn found McCoy bearing down in goal.

Support then came in the form of Ryan, who sold a dummy before stroking the ball into the back of the net.

The goal sparked a reaction from Mitchels and the impressive Lorcan McGrath skipped past a couple of Brendan's defenders before pointing from 30 metres.

Molloy then brought Mitchels level with a free after James McDade was hauled to the ground.

Ryan and Padraig Slane then traded points as the sides went in level at the break, 1-4 to 0-7.

The second half began with a Mitchels point from McDade, before McCoy evaded a couple of challenges to bring the teams level once again.

A Molloy free for Mitchels was followed by a leveller from Conway only for Mitchels to again hit back with a Sean O'Connor free.

A brilliant long-range free from Devine was followed up by another Ryan score to edge Brendan's ahead.

However Mitchels then gained a stranglehold on the match with four unanswered points as the game entered the closing stages.

Devine reduced the gap to the minimum with two frees but another McDade point inched Mitchels two points ahead as the game entered injury time.

With Brendan's in need of a goal, super sub Ciaran Connolly delivered.

Clarke evaded a couple of tackles before offloading to Ryan, who cushioned a left-foot pass into the danger zone for Connolly to fist into the back of the net.

Yet Mitchels weren't finished as O'Connor, who'd been kept relatively quiet by Brendan’s corner-back HP Ward, drifted into the middle of the field and kicked a brilliant long-range point to level once again.

In a poignant move from County Board Chairman Fergal Kiernan, he passed the trophy to one of the club's founders, Michael Mangan, who presented it to Brendan's captain Clarke.