A THIRTY-THREE year wait for senior honours finally came to an end on Sunday when St. Finbarrs lifted the 2021 Warwickshire Senior Hurling Championship.

Not since the late 1980s have the Coventry club lifted a county title but that all changed on Sunday in a tight, tense final against defending champions John Mitchels at Páirc na hÉireann.

It’s further evidence of the evolution of a club that has been building over the last few years, in this case re-introducing a senior hurling panel with the aim of bringing back senior silverware to Holbrooks. 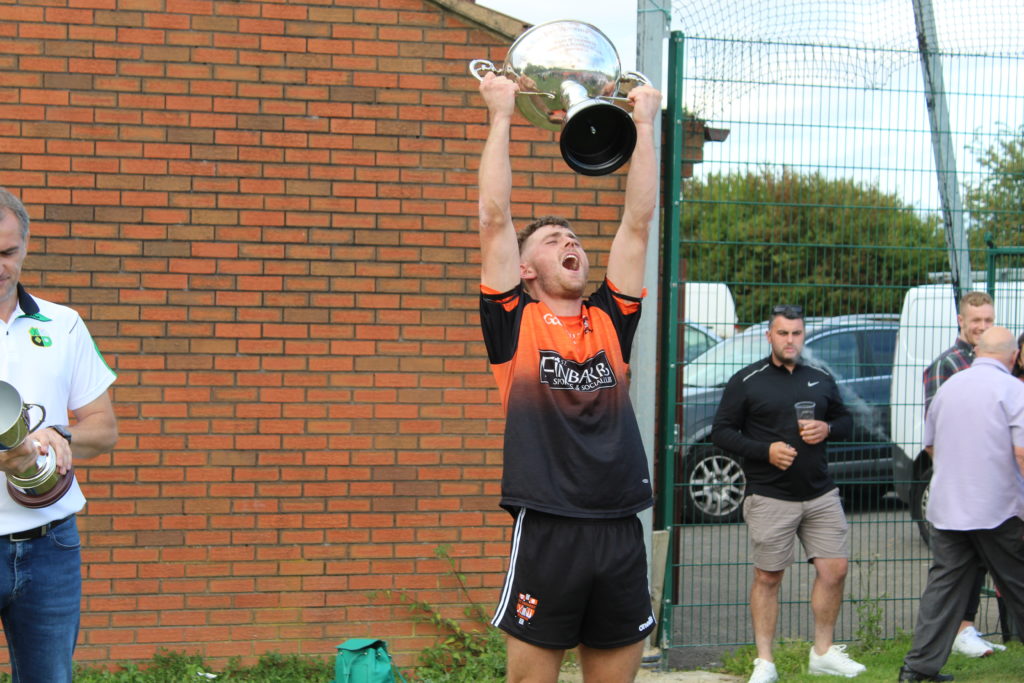 Sunday’s final at a sunny Warwickshire headquarters packed of sub-plots.

For Mitchels this was a quest to claim a historic eight-in-a-row to surpass their team of the early 2000s.

The challengers, now coached by former Warwickshire and Mitchels Bainisteoir Tony Joyce, contained a number of ex-Mitchels players in their panel and were seeking to add the championship to their league title.

In truth this was a game of fine margins and heavily reliant on frees – twenty of the game’s scores came from the set piece and in the end this simply came down to who could hold their nerve.

For Finbarrs, that duty fell to Tiernan Butler in the main and the Ballycastle man got the scoring underway with the first of his six frees for the afternoon.

At the other end, Padraic Crehan was score in chief for Mitchels and he replied with two successive frees to settle the holders.

Another Ballycastle man Saul McCaughan took responsibility for close-range frees for the challengers and his first of the game preceded a long-range point by Kelvin Magee. 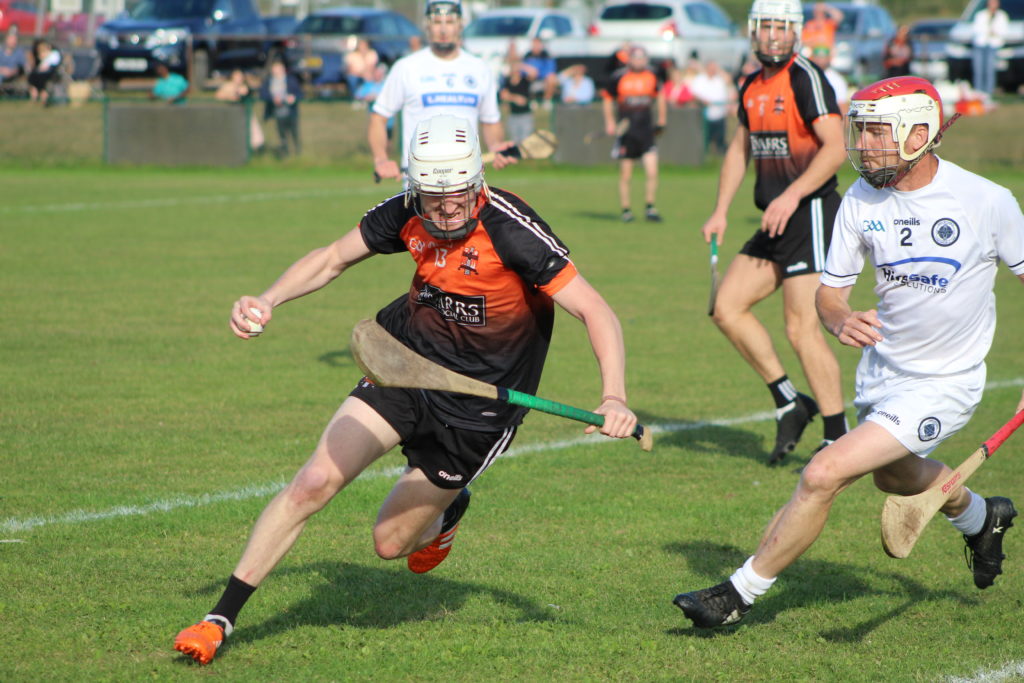 Mitchels hit a purple patch before the water break with Crehan landing three in a row but Finbarrs continued to plug away and they reduced the margin to one point thanks to Butler before McCaughan raced onto a ball over the top of the Mitchels defence to drill home the only goal of the game beyond John O’Shea.

Two successive Butler frees meant the complexion of this game had turned on its head just before half-time; now it was Mitchels who went on the chase.

Two frees either side of half-time from Crehan sent them on the right path, while at the other end O’Shea denied Magee a second goal for Finbarrs with a strong point-blank save. Crehan continued to find his range with an eighth free but Finbarrs kept their noses in front with response frees through Butler and McCaughan.

Any chance of free-flowing hurling was on the backburner in this final, this was purely an arm-wrestle for the county title. 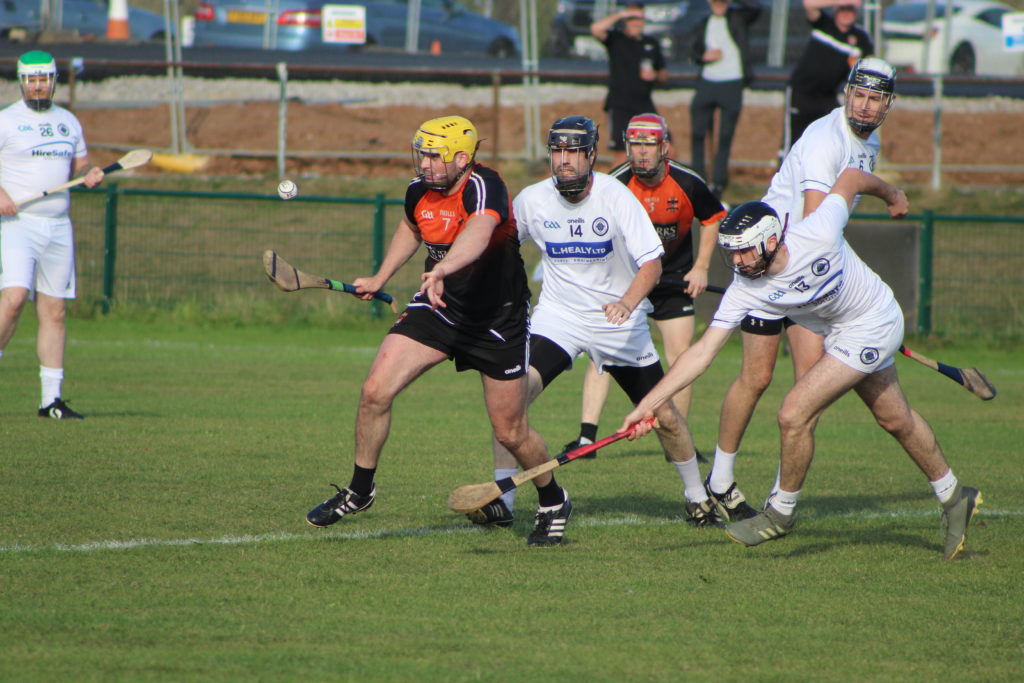 Tiernan Butler in possession for Finbarrs

However, there was one fine move in open play by Finbarrs, Stephen Clarke driving downfield towards Magee who rounded his marker to loop over the bar from thirty metres out. Crehan tried to catch out Finbarrs with a close-range free but after that was charged down the full-forward followed up with his first score from open play.

Yet still Finbarrs came, drawing frees and making the most of their opportunities.

Another free, another conversion from McCaughan but with the game now moving into the closing stages Mitchels threw everything at retaining their championship, Oisin Coffey with a tremendous point quickly followed by Alan Brooks.

That brought the deficit back to one point but ultimately Mitchels couldn’t find that elusive equaliser.

Finbarrs hit back, two more frees from McCaughan restoring their three-point lead at a crucial juncture in the game. 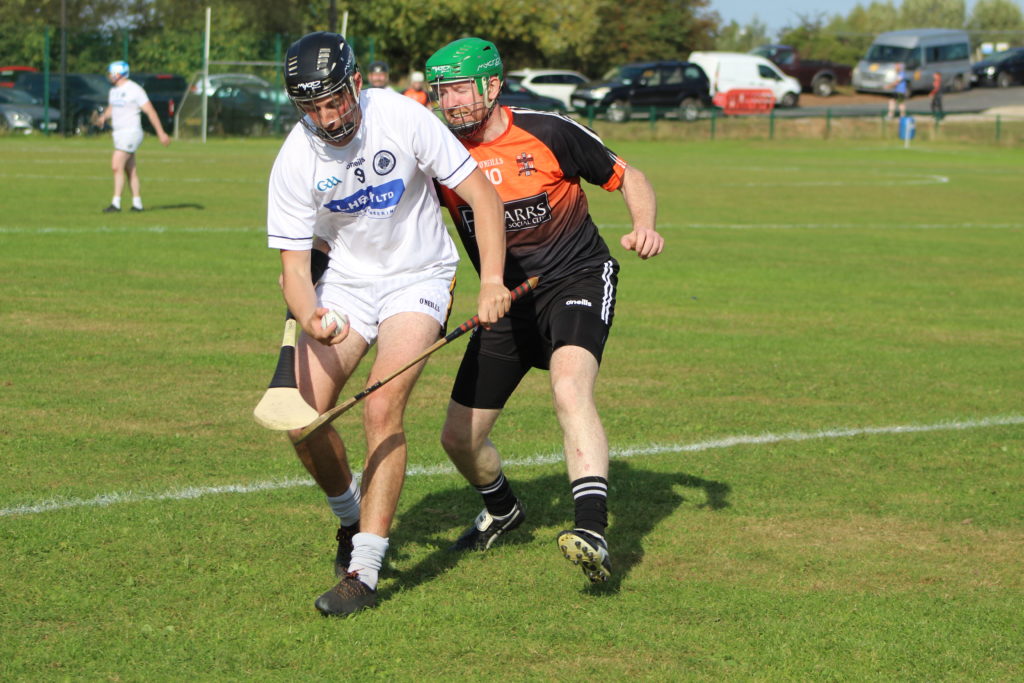 Coffey drove over his second score of the game from a free before Kieran Courtney flashed a thunderous free narrowly over John Hughes’ crossbar to bring the final back to a one-point game.

Mitchels had opportunities in added-time but six second-half wides proved too costly, leaving a jubilant Finbarrs to seal a senior title with one final Butler free.

Man of the match:
Tiernan Butler (St. Finbarrs)
In a game that boiled down to set pieces, the wing-back’s seven points proved the difference to edge Finbarrs over the line.