What does the rise of MMA in Ireland mean for boxing?

IRELAND'S interest, involvement and success in boxing dates back to the pioneering figures of the sport, but at a press conference in London last month Frank Warren raised a few eyebrows.

A baffled Warren also confirmed a poor turnout from the Irish media for their first press conference to promote the fight in Limerick a few days earlier.

At the time, the fight was still scheduled for Thomond Park on September 19, with 33,000 tickets on sale. With under eight weeks to go, over three quarters of the tickets remained unsold and by August 12 the fight had been postponed for the first time.

The reason provided was a virus contracted by Limerick native Lee, and when asked if this was a cover story for poor ticket sales, Warren remained defiant, saying: "We're in August which is a holiday period, I'm quite sure that by the time the fight was going ahead we would have been fully sold out."

What he didn’t have an answer for was why the event had been moved from a 33,000 capacity open-air stadium in Ireland to a 21,000 capacity indoor arena in Manchester. It hasn't been admitted publicly, but despite a major promotional push and a likable, charming Irish world champion in Andy Lee, it seems fan interest in this fight scarcely exists in Ireland.

Mixed Martial Arts (MMA) – and specifically the sport's premier organisation the UFC – has no such trouble selling fights though, with next month's event at Dublin's 3Arena having sold out in a remarkable 60 seconds after going on general sale on Friday afternoon. 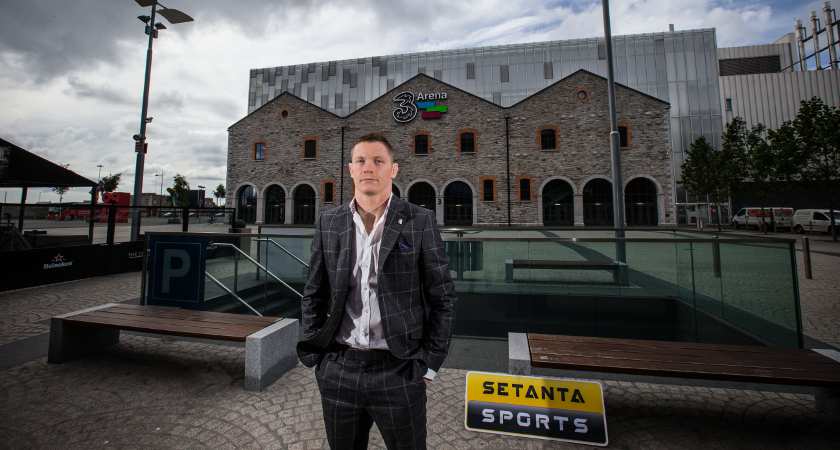 Joseph Duffy of Donegal will headline the UFC event in Dublin next month [Picture: Inpho]
Granted, there were only 9,000 tickets available, but the UFC's Vice President of International Joe Carr believes the demand would be there if they were able to supply that amount half a dozen times over.

Ahead of the UFC's third visit to Dublin, he told The Irish Post: “I've never been that close to Irish boxing, but I can't imagine an Irish boxing event staged in the last two years that has been as big as our event here this year or last year.

“I don't think an Irish boxing event could put 60-80 thousand people in Croke Park, which, based on our demand levels and the research we've done, we're completely confident that if Conor McGregor came back here we'd fill that stadium.

“We couldn't be more impressed with the pace of the ticket sales. It crushes what we sold at last year's event.”

There's no question the rapid rise of MMA in Ireland is largely down to the success of Dubliner McGregor, a worldwide superstar who backed up his bold, ultra-confident persona by claiming the UFC's Interim Featherweight title in Las Vegas in July, and Carr believes the impact is being felt right across Europe too.

“I don't think there's a market that even compares to Ireland in terms of the speed at which it's rapidly grown over the past few years,” he added. “We've just had research done that has shown year-over-year fan interest has grown 41 per cent in Ireland and 70 per cent of our Irish fans have been fans for less than two years.

“They call it 'the Conor McGregor effect' and the reality is he kicked the door in for Irish MMA. It's obviously taken the country by storm but at the end of the day Ireland only has a population of between four and five million people. But we have seen a spill over into the rest of Europe.

“And then there's places in America with big Irish communities like Boston, Chicago and New York. I'm not sure of the numbers exactly, but I think there's something like 40million people of Irish descent across the world. You can't even put a figure on how much of an impact the Irish are making in MMA across the world.

“I'd hate to pin everything on one guy, but I can't deny that it's been his [McGregor's] charisma and what he's done in the crossover to the US. Everyone has an opinion and whether you love him or hate him, he's one of the brightest stars we have.” 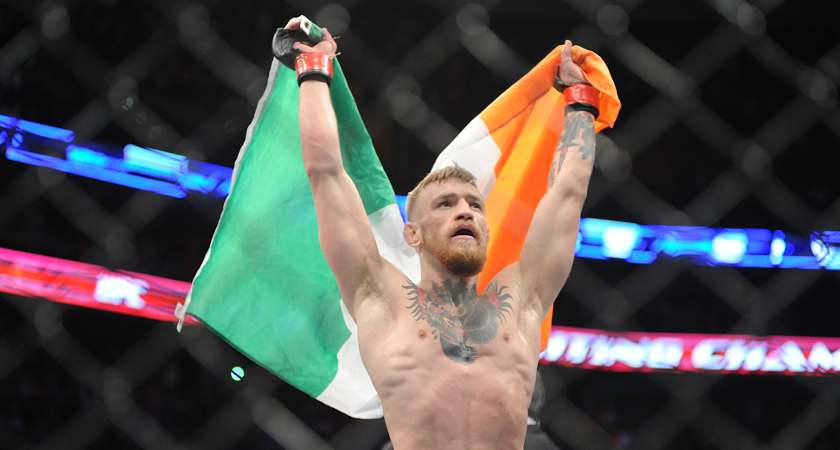 Thousands of Irish MMA fans flocked to Las Vegas to see McGregor beat Chad Mendes [Picture: Inpho]
McGregor is one of eight Irishmen signed up by the UFC, five of which will appear on the card in Dublin on October 24 (namely Joe Duffy, Paddy Holohan, Norman Parke, Cathal Pendred and Neil Seery) as well as female competitor Aisling Daly, with the Dubliner scheduled to fight Brazil's Ericka Almeida.

The absence of McGregor hasn't deterred interest in the event whatsoever, and that's because he's no means the only talented MMA performer to come out of Ireland, says Carr.

“The reality is that Conor has done a great job in opening up this market but for it to be sustainable you need that next crop. I think that's the real value in what Conor has done, he's made the people care about MMA and you'll see that in our show in October.

“Conor's not on that card, but it's guys like Joe Duffy and Paddy Holohan – there are guys coming up behind him and the sustainability of sport relies on other talent. Conor is going to be fighting for a while, but he's still only one guy, it takes a lot more depth than that to keep this business going.”

Indeed, Holohan, who will fight Louis Smolka on the card, believes boxing must take a back seat while MMA has its moment, but the Tallaght man is already sowing seeds to ensure his sport is more than just a flash in the pan.

He told The Irish Post: “Anybody that refuses to accept and adapt to that [MMA being bigger than boxing] now is never going to. Bring me a combat sport that is bigger and better than MMA right now?

“We've put a lot of time and effort into this and it's still growing. I'm part of a foundation programme at SBG [Straight Blast Gym, Dublin] so a lot of guys coming up are learning from me. We've put grass roots in place and my own gym is going to be opening soon in my area, which is another way of ensuring it keeps expanding.” 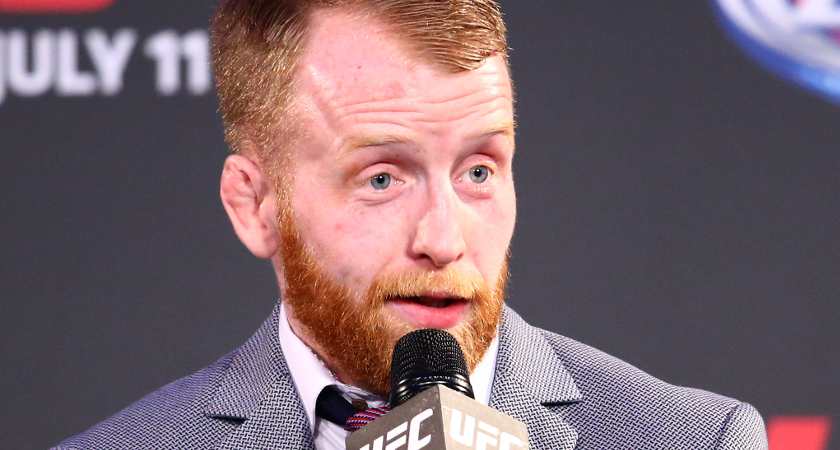 Paddy Holohan fights on the UFC card in Dublin on October 24 [Picture: Inpho]
So what does all this mean for boxing? Is MMA and the UFC craze a threat to this ancient sport that has produced so many legendary performances, nights and champions for Ireland? Not according to Paschal Collins, who runs Dublin's famous Celtic Warriors boxing gym, with the renowned trainer noticing an increase in fighters coming to seek his expertise.

“I actually think it's a good thing because it's bringing interest back into combat sports,” he told The Irish Post. “It's going to help professional boxing because you'll see fighters cross over from boxing to MMA, but you'll also see others make the switch from MMA to boxing.

“And when they do maybe they'll bring a lot of support over to the boxing side. So I honestly think it works hand-in-hand. A lot of them fighters come to my gym anyway; Conor McGregor is a regular, he spars with my boxers, so there's interest on both sides.

“There's actually more people than ever coming to my gym now to learn boxing because of the MMA, so that they can fine-tune their boxing skills to help them in the octagon. That's why Conor McGregor is so good, because not only is he a very good fighter, but he could also be a professional boxer.

“When fighters come to my gym to train in boxing some think to themselves 'I actually enjoy this side of the game more' and decide to stay with it. In the octagon you have to do groundwork, you have to be able to stand and fight, kick-box – there's a lot of work involved, and a lot of guys don't have that full interest and end up sticking with the boxing.

“The two sports are good for each other. Conor McGregor has given combat sport – be that Jiu-Jitsu, boxing or any type of martial art – a really big injection, and those who don't take it up are wanting to go out and have a night out at a big event.”

On reflection – whether you favour the old school side of combat sport through boxing, or the new-wave crest of MMA – the future of the fighting Irish actually looks in great health.