Kevin Doyle: 'I didn’t want to leave Wolves on a sour note'

THERE were so many Prodigal Sons returning home last week that you worried for the health of fatted calves.

Andy Reid was there — but his guitar was not. Then there was Darron Gibson and Anthony Stokes, men whose Ireland careers Giovanni Trapattoni faded dramatically over time.

And finally, Kevin Doyle was back at the check-in desk of the team hotel in Portmarnock, the same Kevin Doyle who saved Trapattoni’s skin with a last-minute winner in Kazakhstan in September last year but who was bombed out just months later.

He’s allowed to be bitter. But when you are Kevin Doyle, you don’t do regrets.

You’d think too about the definite interest from Arsenal and Schalke and you’d wonder about where your career might have taken you. Rather than fight relegation, you could have been scrapping for a place in a Champions League quarter-final or semi.

But you don’t grumble because it’s not your style.

You were 22 when Steve Coppell took you from Cork City, where you had just bought a two-bed apartment on the back of the premise that you’d keep earning a corn in the League of Ireland.

By 2008, the bottom had fallen out of both Ireland’s housing market and its League and the thought of what could have happened to Doyle never escaped him. “I’d probably have stopped playing and gone looking for something else to make a living.”

So that’s the context of where he’s coming from now when he talks about perspective. Dropped from the Ireland squad? Big deal. Forced to ply his trade in League One? Well, when you earn £40,000-a-week, it’s hardly hardship is it?

“To be honest, I’m finding the football enjoyable here,” Doyle said. “Every game we have played has been end to end. The fans are loving us because we’re winning — and I was worried about what reception I’d get initially because of the way last season ended up.

“But it’s been great. I feel I’m a fortunate man. I’m having fun. We’re not looking over our shoulder, worrying about relegation. We’ve all got smiles on our faces.” 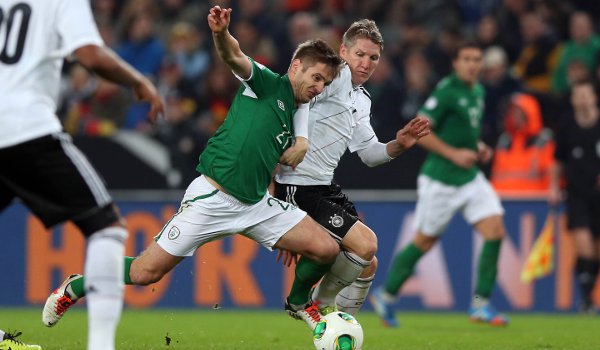 For years, that smile was somewhat forced. Reading were relegated, then failed to get back up. Wolves bought him but the fight for survival was constant. Finally, they fell through the Premier League trapdoor and then kept falling. Meanwhile, Celtic called but no one answered. “It was close, that one. But it didn’t happen. Look, your life can be full of ifs, buts and maybes.

“I’ve had years earning a great living, playing in the Premier League, playing for Ireland, winning the Championship, winning the League of Ireland. I can’t complain.”

Well, he could if he wanted to. Having served Trapattoni so loyally, he found there was no payback and found, via the internet, that he’d been dropped from his squad.

“I understand how football works. I don’t pick squads. At the time I was disappointed not to be told about it but that’s as far as my annoyance goes. I feel sorry for Giovanni.

"Aside from the last six months, we had a very good time and you’d hope the end of his reign does not overshadow the success he achieved over a long period. It’s never nice for any man to lose his job but that’s what happens in management. It’s a tough business.”

At 30, Doyle has a limited number of years left in the business. So, last summer, when the option was there again to leave Wolves, he chose to stay.

Plenty wondered why — because this was a man who’d lit up the Premier League for a couple of years and who’d appeared on the radar of some of England and Germany’s bigger clubs. Going to Colchester, Walsall or MK Dons seemed beneath him. Yet, he’s no football snob.

“At the start of the summer I did think it would be tough to motivate myself for League One but once we got back playing again, winning games in front of 20,000 people, it doesn’t matter what League you are in.

“It’s nice to be winning games and in the top two or three in the League. It’s nice to be involved with a club where the fans are happy and to be in an environment where you go training and the staff and players have a smile on their face.

“In the summer, I made a personal decision that I wasn’t going to leave Wolves for just any old move, to go to a club where I could get relegated again. Maybe in a year or two’s time, that may change. But there is more to football than just being in a relegation battle. I’ve had that for years.

“I could have went somewhere in the Premier League and got relegated or stayed here with Wolves, where we have a very good chance of winning promotion. With either club, I could be in the Championship next season, playing against one another. I wanted to try and stay and help. I didn’t want to leave Wolves on a sour note and go out the back door.”

So he stayed. He’s scoring goals again, winning games again, looking to the future, determined to have one more go at the Premier League.

“I definitely think I can get back there again,” he says. “I’m still young enough.”

12 English League Footballers who love or played Gaelic Football, Hurling or both