Explore the best sands, strands and beaches of Ireland and Britain

OH we do like to be beside the seaside, well, when the horizontal rain lets up.

And when it does, there’s a huge choice and range of beaches in these islands — long sandy strands like Benone in Co. Derry, surfing paradises in Co. Sligo, powder-white strands in Morar, Scotland, and little rocky coves in Cornwall.

Wales now has a coastal path which stretches right round its coastline, encompassing an area the size of, well now I come to think of it, Wales. Ballintoy Harbour and beach have been widely featured in Game of Thrones, as have the Cushendun Caves, just down the coast. Here’s a roundup of some of the best beaches in Ireland and Britain.

A sheltered sandy cove some four miles from Land’s End in Cornwall, the waters here are amongst the warmest waters in these islands — some 19 degrees C. Air temperatures regularly exceed 24 degrees, one of the highest year-round averages in Britain or Ireland. It’s all down to the Gulf Stream — but it would be fair to say that this marine current also gives the area some niggly weather too.

If sunbathing isn’t feasible, a coastal path winds round the cove — with great viewing points to watch out for any passing dolphins and whales. The path passes by the Minack Theatre, pictured below, an open-air theatre, constructed above a gully with a rocky granite outcrop jutting into the sea. An amazingly atmospheric place to see any drama. www.minack.com 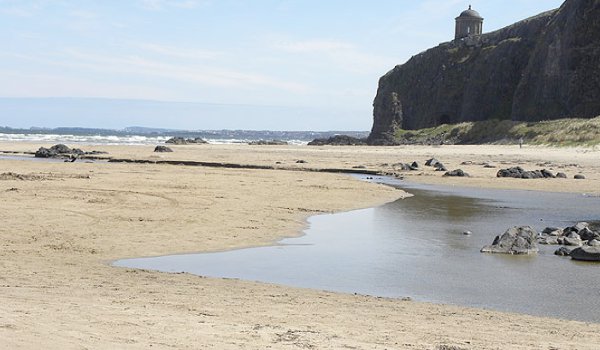 Just beside the village of Downhill, Benone is a strip of silvery sand with a magnificent backdrop of mountain and cliff scenery on Derry’s Atlantic coast. Washed by huge breakers it overlooks Donegal’s Inishowen Peninsula just a few miles across the sparkling ocean. The clean, firm, golden sands of Benone are without rocks, shingle or seaweed. And there’s seven miles of the stuff.

Of course, it’s not all sand, surf and turf. History abounds, you’ll be unsurprised to hear, in this neck of the woods. To the westerly end of the Strand stands a Martello Tower, built to help see off Napoleon should he have expressed designs on Derry. On the headland overlooking  Magilligan Point at the southerly end of Benone Strand is the very strange Mussenden Temple, a building for which the word ‘folly’ could have been invented.

Designer Michael Shanahan created it along the lines of the Temples of Vesta in Tivoli and Rome. You could say it looks slightly out of place on a Derry promontory, looking across to the western isles of Scotland. “Only a poet could dream of such a place; only a madman would build one,” is one of the more considered verdicts.

Inch is some three miles of glorious strand just off the main Killarney to Dingle Road. The beach is basically a huge sand pit jutting into the sea between Dingle Harbour and Castlemaine Harbour, and was the film-set location for Ryan’s Daughter.

Parking is on the sand, but you need to be careful of the tides. Facilities are sparse, but there’s a good restaurant and pub. In the dune-top Sammy’s Bar www.inchbeach.com you can check out silver screen stills of the films made in the area. 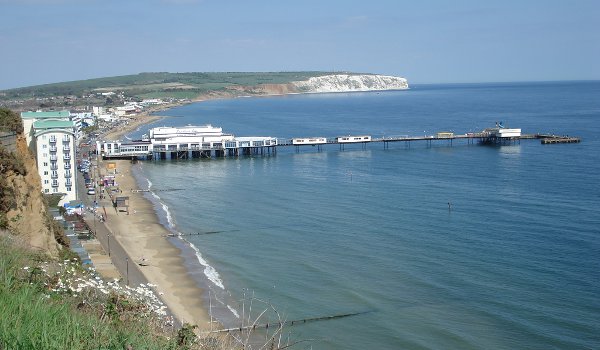 The Isle of Wight’s sheltered east side, from Shanklin to Sandown, is one of the sandiest and sunniest areas of Britain. This, one of the most southerly reaches of the country, averages eight hours of sun per day. Shanklin also offers soft, clean sands, a traditional kiss-me-quick and candyfloss pier, deck chairs for hire, and a very fine café called the Beach Shack.

Just down the coast, Steephill Cove offers a more secluded experience- boasting a handful of cottages, brightly coloured canopied deckchairs, beach huts and lobster pots. There’s no road access — you have to park some five minutes walk away — so no noise and no pollution. There are also two cracking restaurants, the Boathouse Restaurant, and the Crab Shed.

More than half of the island, mainly in the west, is designated as the Isle of Wight Area of Outstanding Natural Beauty — soft cliffs and sea ledges, clear waters and lots of beaches.

The island is a haven for watersports of all type and is also a top destination for cycling. The Lonely Planet Best in Travel Guide (2010) for cycling locations put it in the world’s top ten. Bike hire is widely available throughout the island.

Stranraer is known to most of our (northerly) readers as the ferry port where you catch the boat for Larne in Co. Antrim. But the whole area of Galloway is dotted with dozens of dramatic, secret beaches for those with enough spirit of adventure to stray off the main road south and conquer the twisty coastal laneways.

The landscape is almost indistinguishable from Co. Down and Co. Antrim. Unsurprisingly, many centuries ago, Galloway was part of Dalriada, a Gaelic Irish colony in Scotland.

Corsewall Point is an invigorating peninsula, jutting out into a sea that tends to be big and angry and makes the air tastes of salt. Deep fissures in the rocks cause the rollers from the Irish Sea to shoot upwards in plumes of spray.

The best place to stay in such surroundings is probably a lighthouse, and luckily there’s one on hand. Corsewall Point Lighthouse www.lighthousehotel.co.uk is now a four-star luxury hotel with a romantic, award-winning restaurant. Bleak chic — what more could you want? 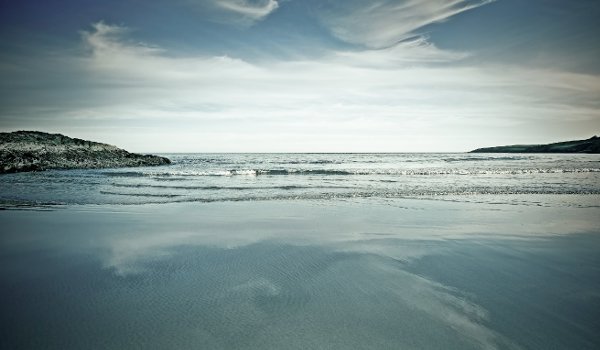 Regularly claimed as Ireland’s finest beach, Inchydoney Beach on the eponymous island is a sliver of shimmering sand bordering Clonakilty Bay. Gently shelving, with shallow water, the beach is popular in summer, but is extensive enough to never be crowded. The water temperature here regularly reaches 20 degrees C — to put that in context, beaches on Scotland’s north coast rarely reach more than 15 degrees.

Sligo has some idyllic seaside towns, beaches and surf, as well as some old-fashioned 1950s style resorts. Easky, a renowned centre for surf boarding, stands on the famous Killala Bay — where the French ships anchored in 1798 in support of Irish nationalism. Strandhill is also a busy surfing centre.

Nearby, the silvery sands of Strandhill lie at the western base of Knocknarea on the Cúil Irra peninsula, facing the Atlantic. And therein lies its allure. Strandhill boasts a vast beach break capable of creating huge waves in the right conditions.

Strandhill Surf School will provide you with everything from board to wet suit www.strandhillsurfschool.com, while the Strandhill Lodge, Hostel & Surf School has special surf and stay deals www.strandhillaccommodation.com — from €20 per person per night. 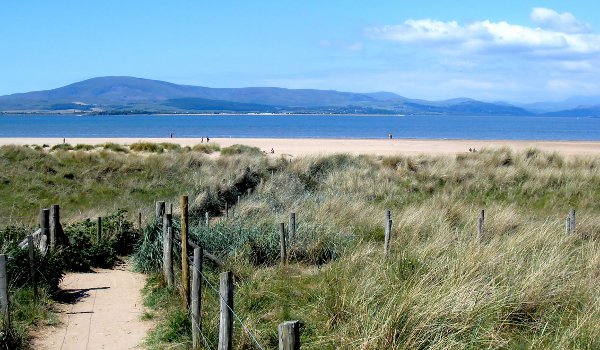 Barrow-in-Furness probably doesn’t pop into your mind if you’re thinking of sun, sand and sangria. But this lovely sandy beach on the south side of the Duddon estuary is backed by a vast, Namibia-like expanse of sand in its dune system, which unsurprisingly constitutes a nature reserve.

The weather can be bracing enough — although the area is somewhat sheltered from the Irish Sea by Walney Island. The dunes are dotted with marram grass and rare wild flowers — the reserve is one of the most botanically rich coastal areas, home to rare butterflies, invertebrates and a large natterjack toad population.

This is also prime bird-spotting territory, and coastal walks give terrific views across the estuary to a parade of famous fells — Crinkle Crags, Coniston Old Man, Scafell.

Balnakeil is a village in the north of the county of Sutherland, Scottish Highlands, its beach a deserted strand of dazzling white sand lapped by the shallow turquoise waters of Balnakeil Bay. You’ll probably have the place pretty much to yourself except for an artist or two taking advantage of the extraordinary light, and on the odd occasion a selkie.

These creatures live most of their time as seals, but can take human form — usually a beautiful woman. Alas, any hand of friendship is fruitless. And as for romance, forget about it. As so many have found before, once a selkie has conversed with a human, there’ll be no contact for a further seven years. Sad, but true.

This is probably as remote a location as you can find on Britain’s coastline (hence the prevalence of selkies), and certainly not a daytrip. Best bet is to rent one of the local cottages. Elliot Houses www.elliothouses.co.uk rents out the Balnakeil Beach Bothy from £400 for seven nights. 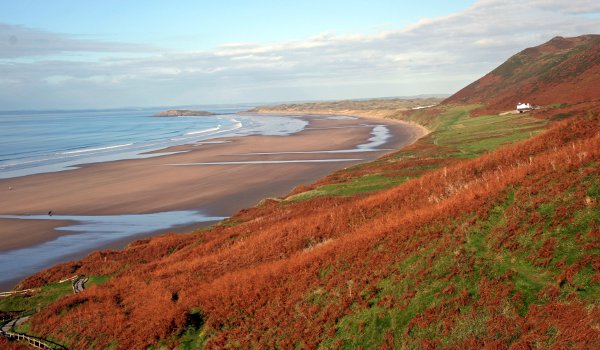 Many would insist that Rhossili Bay on the Gower Peninsula — a dazzling, three-mile crescent of golden sand that makes the lists of best beaches in the world with regularity — is one of the best beaches in these islands. Certainly the Lonely Planet guide does; they named the All Wales Coast Path, of which Rhossili is one of the gems, the world’s greatest region for a holiday. There’s history here too as it’s widely believed that St David and (probably) St Patrick both called the bay home.

If you’re feeling adventurous or energetic you can make for Mewslade Bay just over the headland from Rhossili. This secluded beach is only accessible at low tide and if you continue round to the right you’ll reach Fall Bay and the nearby Giant’s Cave.

Too often we Irish become blind to the charms of Anglesey in the north west of Wales. We’re too busy either heading for Holyhead and the boat home, or speeding through the island on the way to more southerly destinations in Britain. But this island has much to offer, not least some excellent beaches.

At the north westerly tip the Llyn Peninsula is protected from the winds that blow in off the Irish Sea by the Welsh Mountains. The 160km of coastline is studded with sheltered inlets and fine, sandy strands. One of the most enchanting is the mile-long golden strand of Llanbedrog, near the Mynydd Tir-y-Cwmwd headland.

Sand dunes, rugged rocks with offshore islands and stacks and spectacular cliffs all make this area a top summer destination.