Montserrat: the Caribbean island where St Patrick's Day is a public holiday

shares 1.5k
Share this article:
THERE'S ONLY one other place in the world where Saint Patrick’s Day is a public holiday: Montserrat. We know why it's celebrated in Ireland…but why there?

The reason is fascinating. Montserrat, a member of the British Commonwealth, is a Caribbean island 16 km long and 11 km wide. It’s called The Emerald Isle of the Caribbean both for its resemblance to coastal Ireland and for the Irish ancestry of some of its inhabitants. It is tiny, with no explainable proximity to Ireland. So what’s the deal?

Well, Ireland and Montserrat go way back. The Cromwellian conquest of Ireland (1649–53) caused an expulsion of many native Irish from their homeland. Ireland was invaded and defeated by English forces, led by Oliver Cromwell, during the Wars of the Three Kingdoms. Cromwell’s hostility to the Irish was religious as well as political. He was passionately opposed to the Catholic Church, and the brutality of his military campaign in Ireland was unprecedented.

Many Catholics knew they would be murdered if they hung around in Ireland, and were desperate to escape. The victims of Cromwellian ousting ranged from political and military prisoners to anyone who might burden the public purse: orphans, widows and the unemployed. Thousands fled on ships heading for the Americas, somewhere, anywhere. Many who could not afford the fare made a deal to work as indentured labourers for several years abroad. They would be given housing, food and clothing, and their family left in Ireland would be given a small fee as a sweetener.

Many Irish Catholics jumped at this chance, and ended up in the Caribbean on the small islands of St Kitts and Nevis. The journey across the ocean was a tough one, and passengers died in their thousands en route. But the Irish weren’t the only ones. Many African slaves had been captured and sent to work the sugar plantations on the same islands. They also worked producing rum, arrowroot and Sea Island cotton.

The Irish indentured labourers were sent to the island to work alongside the African slaves. But there was a difference between the Irish and the Africans. After a number of years, the Irish labourer’s contract ended, and they were free. Not so for the African slaves, who weren’t freed fully and legally until 1834, when slavery was abolished in Montserrat.

In the 1630s, Irish Catholics were sent to colonize the nearby Island of Montserrat by the British governer of St Kitts. They brought their own slaves with them and ran the plantations on behalf of absentee British landlords.

This seemed like a good idea at the start – but with the slaves doing all the work, resentments grew and it didn’t look so smart by 1768. The slaves outnumbered the Irish Catholics by 3 to 1. The slaves decided it was time for a rebellion. 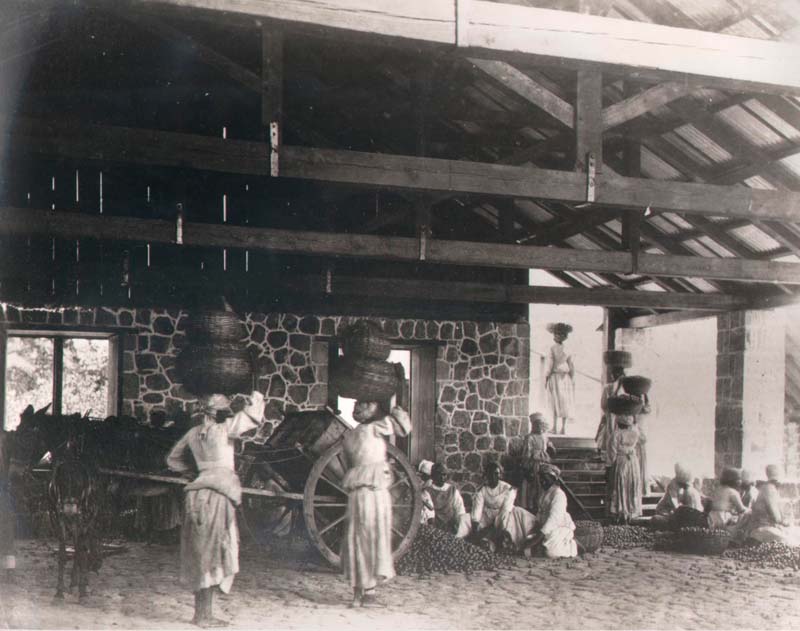 After slavery was abolished, many members of the Sturge family bought land on Montserrat. They started the mass production of lime juice and citric acid in 1869. This picture is of former slaves ecuelling limes – the process of manually extracting essential oil from the rind of the fruit.

The Africans knew that the Irish would be out celebrating St Patrick’s Day, so that was the day they set for the rebellion. However, the Irish got wind of the plan and it was thwarted at the last minute. The Irish “governors” caught who they thought were the ringleaders, and hung nine African slaves on Paddy’s Day in 1768. It was a tragedy for the slaves and a grisly victory for the Irish.

Thankfully times have changed. The modern day descendants of Montserrat are a mixture of Africans and Irish with a bit of English blood thrown in too. So their St Patrick’s celebration has a different meaning than it does in Ireland. It is both sad and happy and there’s a lot of eating! The brave African rebels are remembered, especially.

The irony is not lost on the population that the Irish treated the African slaves just as badly, or worse, than they themselves had been treated in Ireland. But it is not just a sad day. It is also a celebration of everyone’s Irish genealogy, and they wouldn’t be on the island without their Irish past.

Nowadays St Patrick’s Day on Monstserrat commemorates a painful past while celebrating its African and Irish heritage. It’s a 7 day festival with islanders dancing the first night, then mocking their one-time masters by cracking whips and masquerading in tall hats the next.  Some events, like the mask-wearing parade, don’t seem very Irish at all. But there’s also plenty of dancing jigs and leprachauns. It looks colourful and fun. And there’s ridiculously good rum.

The inhabitants now all speak English as a first language, but this wasn’t always the case. The people of Montserrat are thought to have spoken Irish as their first language for many centuries before now. It is thought that most of the population spoke Irish Gaelic until about 1900.

According to Gerry Tobin at the Gerry Tobin Irish Language School, in 1868, a ship crewed by Irish-speaking Corkmen dropped anchor at Montserrat. He said:

“At the dock, they were amazed to hear black Montserratans speaking Irish. As cordial conversation went forward between the two groups in formal Gaelic fashion, the Montserratans referred to Cork as ‘Corcaigh na gCuan’ (Cork of the Harbours) a poetic term for Cork used by the filí (poets of the old oral tradition) which had not been in common use in Ireland since the destruction of the Gaelic social system in the 17th century.

“Eventually, as things loosened up a bit, it’s said the Montserratans also informed the Corkmen with good humour and a straight face ‘tá sé sin ait, ní fheictear mar Gaeil sibh’ (that’s funny, you guys don’t look Irish). This was a great hit with the Corkmen and reported widely enough among Irish speakers that eventually even I read about it.”

A census undertaken in 1678 showed that around 60% of the people on Montserrat were Irish. There were thought to be about 1900 Irish people on the island. After their labouring contracts expired, many bought their own tracts of land and got into the merchant trade.

By 1729, only 641 people identified as fully Irish. But the Irish population didn’t leave, it was more a case of merging cultures. Irish people married former African slaves, and their offspring now think of themselves as Afro-Irish. The family names of Reilly, O’Brien and Kelly are still around in the population of the island.

The people of Montserrat were granted full residency rights in the UK in 1998, and British citizenship was granted in 2002. But if you visit there, your passport will still be stamped with a shamrock!