Actors in Celtic dress parade with wolfhounds at the opening ceremony of the 1924 Aonach Tailteann. Image courtesy of the National Library of Ireland.

HUNDREDS OF years ago, Ireland had its very own Olympics. The Tailteann Games, as they were called, were briefly revived in the 1920s but fell foul of Civil War politics and economic hardship. Is it time to reinstate this historic celebration of Irish sport and culture?

From ancient times until the Middle Ages, Ireland was divided into many kingdoms, each one home to its own clan or tribe. The local king or chieftain would oversee the running of the kingdom, defend territory from neighbouring tribes and administer justice. Occasionally, he would also summon his people to a gathering called an óenach.

Óenach is an old Irish word, usually taken to mean a fair or market, but in pagan Ireland it was much more than that. At the óenach, the king would make announcements of war, discuss peace treaties, or enact new laws. The people would remember the kingdom’s important dead. Traders would sell food, livestock and foreign wares. And best of all, there were sporting contests and horse racing, as well as music and storytelling.

The most famous of these gatherings was Óenach Tailten (the Tailteann Games). This annual event, held at Teltown in Co Meath during the first two weeks of August, was presided over by the King of Tara. During the day, chariot and horse races took place along with feats of strength and skill, such as boxing and wrestling. When night fell, musicians and storytellers kept revellers entertained.

Couples could even marry at Óenach Tailten, although they did so without laying eyes on each other beforehand. Once wedded, the pair were obliged under Brehon Law to live together for a year and a day. Fortunately for those who didn’t live happily ever after, Teltown Marriages came with a get out clause. A deed of separation could be obtained at the following year’s óenach – all the couple had to do was turn back-to-back and walk away from each other. 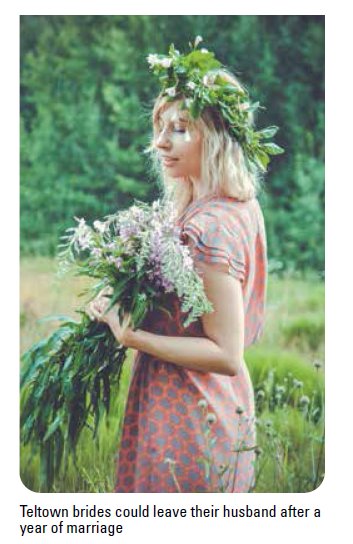 Little is known of Óenach Tailten’s beginnings, shrouded as it is in myth and mystery – Fionn mac Cumhaill himself was said to have attended to recruit men for the Fianna. According to The Book of Invasions (a mythical history of Ireland written by monks in the eleventh century) the very first Óenach Tailten was held by the Celtic god, Lugh Lámhfhada (Lugh of the Long Arm), almost two thousand years before the birth of Jesus.

The story goes that Lugh wanted to mourn his foster mother, the goddess Queen Tailtiu, so he invited the people of Ireland to her funeral games and buried her under a mound at Teltown. Of course, this is a fairy tale, not a historical account, but one element may be true – historians think the óenachs originated as funeral games because some of their locations were connected with mythical burials.

It’s doubtful the Tailteann Games are as old as The Book of Invasions claims, but they did continue for centuries. We know from sixth century records that they were taking place at that time. However, archaeological evidence suggests they began before then, while the link with pagan god, Lugh, hints at an origin in pre- Christian times. 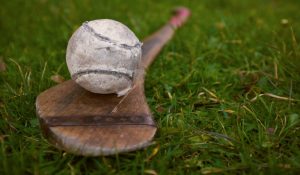 According to historical annals, Óenach Tailten was mostly attended by people living in the lands of the Uí Néills during the eighth, ninth and tenth centuries. At that time, the Uí Néills controlled much of the northern half of Ireland and, as holders of the Tara kingship, they presided over Óenach Tailten. The last Óenach Tailten was staged in 1169, but it was in trouble long before then, according to records from the times. In 806, the monks of Tallaght organised a successful boycott of the Games to protest against an attack on their monastery by the Uí Néills. The annals also note occasional fights between different groups of participants.

The Games were abandoned on repeated occasions in the late ninth century before being stopped completely in 927. Rivalry between the northern (Ulster) and southern (Meath) factions of the Uí Néill clan is thought to be the reason for the ultimate demise of Óenach Tailten.

The óenach of 927 became known as the ‘black óenach’, with the annals noting that a Muirchertach mac Néill ‘thwarted the fair’ that year. Revivals were attempted in 1007, 1120 and 1168 but they weren’t successful enough to see the festival permanently reinstated. In the end, the óenachs of ancient times evolved into country fairs (aonach in Irish) and Óenach Tailten was no different; it became the Tailten Fair. 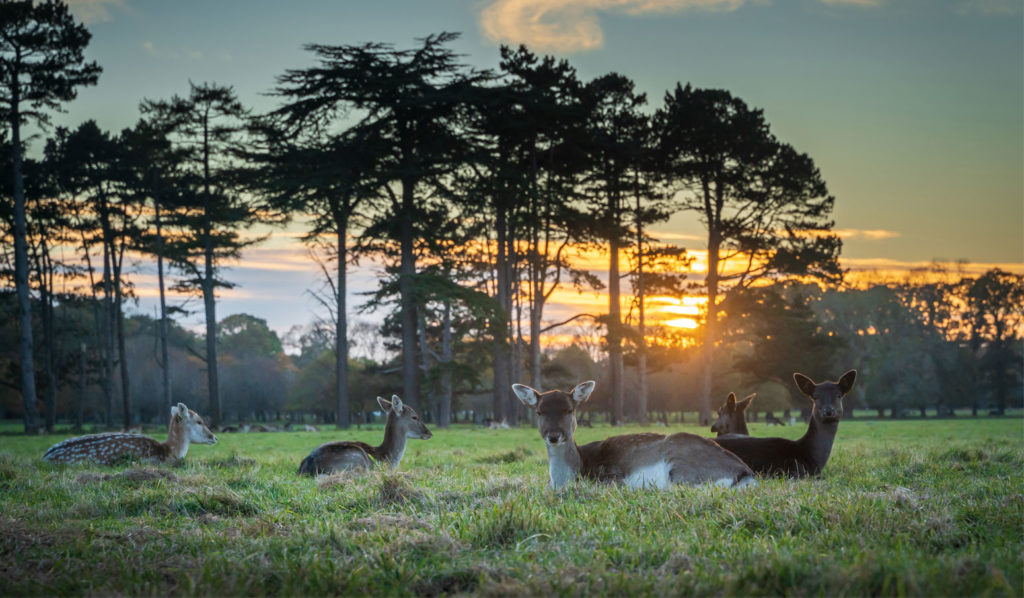 The Tailteann Games would probably have lain forgotten in the annals of history were it not for the ‘Gaelic Revival’ of the late nineteenth century. During this time, Irish nationalists dug deep into the past to remind the country of its rich history. They wanted Irish people to feel proud of their culture and language; restaging the Tailteann Games was seen as a means to that end. It may have seemed like a distant dream in the 1890s, but just one month after the British left Dublin Castle in 1922, the new Irish government decided to revive the Tailteann Games. This grand gesture would announce the birth of the Irish nation to the world and showcase the best of Irish culture and sport. The date was set for August 1922.

Minister for Posts and Telegraphs, J. J. Walsh, took the job of organising the event. Walsh, who had been jailed during the War of Independence, was instrumental to the success of Aonach Tailteann, as it was called. The new government allocated £10,000 for the games. Walsh gave this money to the G.A.A. to renovate Croke Park and in return, they made the stadium available for the duration of the games. Walsh also had big plans to involve Irish emigrants. Irish communities across the world held trials to choose contestants who would travel to the games. 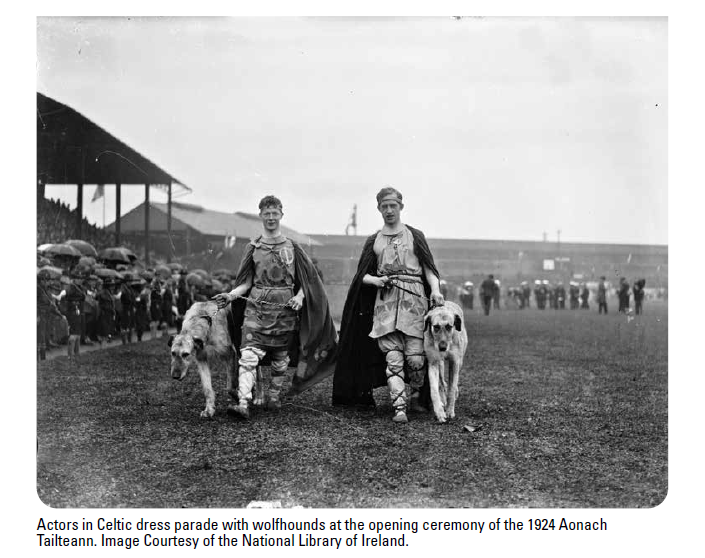 Enthusiasm was high and plans were in progress when Civil War broke out. Aonach Tailteann was postponed. When the war ended a year later, the country was in ruins and some in government felt the money would be best spent elsewhere. Walsh, arguing that the games were more important than ever, got his way and the date was fixed for August 1924.

Anti-Treaty supporters, who had opposed the government during the Civil War, called for a boycott but their pleas fell on deaf ears. The event was a roaring success, larger than even the Olympics, held in Paris that same year. Thirty thousand people watched the opening ceremony at Croke Park as Irish wolfhounds and actors in Celtic dress paraded the arena. That night, a fireworks display lit up the skies over Dublin. An ambitious programme of events had been arranged, with six and a half thousand competitors and a thousand medals. Teams of athletes – who were either Irish or of Irish heritage – came from England, Scotland, Wales, New Zealand, South Africa, Argentina, Canada and America.

Events were staged all over Dublin. Gaelic games were played at Croke Park, swimming took place at the Phoenix Park, rowing at Islandbridge, boxing at Portobello, billiards at the Catholic Club on O’Connell Street, chess at Trinity College and yachting at Dun Laoghaire. In fact, the range of events was staggering, with tug of war, tennis, cycling, archery, horseracing, shooting and golf all getting their moment to shine. There was even a marathon from Navan to Croke Park. And participants weren’t limited to sporting events – contests also took place for piped bands, poetry, Irish dancing, storytelling, singing and art.

To ensure the games were well attended, Walsh had invited a host of athletes to stop off in Ireland on their way home from the Paris Olympics. The most famous of these was Harold Osborn, an American athlete who won two golds in Paris. His appearance at the Tailteann Games drew huge crowds and lots of press interest.

Motorbike racing was one of the great successes of the Games, drawing forty thousand spectators to the Phoenix Park. Many more gathered to witness a mock battle staged by the newly formed Free State Air Corps. One hundred thousand people watched as ground troops defended a wooden castle while in the air, pilots dropped fake bombs that exploded into plumes of smoke. The Irish Times described the Games as “an enormous success, full of brilliant performances which have given a tremendous impetus to Ireland and to Irish sport” and hailed J. J. Walsh as “an optimist among pessimists.” 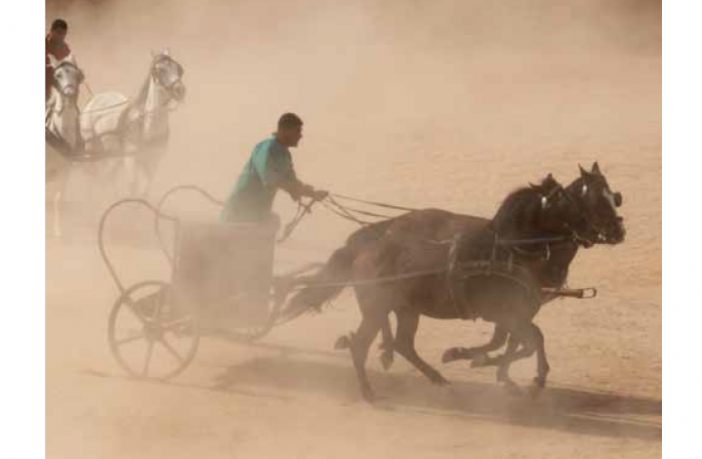 It was expected that this would be the first of many, and that Aonach Tailteann would be held every four years. The 1928 games were similarly successful. Amsterdam hosted the 1928 Olympics so once again, athletes were invited to visit Ireland. Pat O’Callaghan, a medical student from Cork who became a national hero when he won Olympic gold for his hammer throw, was welcomed enthusiastically. To the crowd’s delight, he threw even further at the Tailteann Games than he had in Amsterdam.

The most famous visitor to the 1928 Games wasn’t a competitor, though a sportsman, nonetheless. World heavy weight boxing champion Gene Tunney, whose parents hailed from Mayo, received a great welcome when crowds turned out for his arrival at Dun Laoghaire. Tunney was only recently retired, having won his last fight just a month previously.

Waterpolo was a highlight of the 1928 Games, thanks to Ireland beating England. And once again, teams of Irish athletes came from all over the world – in fact, the number of competitors was almost as high as it had been in 1924. More female athletes took part in the Games than in the Olympics that year. All in all, the second Aonach Tailteann was a huge success.

Things had changed dramatically by the time the Games were due to be staged in 1932. Fianna Fáil won the election that year, ushering in a complete changing of the guard when they formed a new government. With memories of the Civil War still fresh, how likely was the new government to endorse an event that had been the brainchild of their political enemies?

The Games of 1932 were plagued by a series of unlucky events. Firstly, J. J. Walsh stepped down as director of the Tailteann Committee. Disillusioned with politics, Walsh had resigned from government in 1927. Now, he decided it was time to focus his efforts elsewhere. His experience was sorely missed.

The second problem was timing. The Eucharistic Congress, which took place just days before the Games kicked off, drew one million people to mass at the Phoenix Park. In contrast, the thirty thousand people who turned up to the opening of the Games seemed like a poor show. Finally, the 1932 Olympics took place in Los Angeles, depriving the Tailteann Committee of another chance to attract international stars. As a result, the 1932 Aonach Tailteann was nowhere near as successful as its predecessors. Sadly, Aonach Tailteann fizzled out after that poor performance, despite Walsh’s efforts to save it. At the time, the National Athletic and Cycling Association was involved in a bitter dispute about its representation of athletes in Northern Ireland. It refused to recognise the international body’s ruling that it had no jurisdiction there. As a result, Irish athletes were banned from competing, making the fate of the 1936 Games uncertain.

On top of that, a damaging trade war with Britain meant that government finances were in a poor state. Walsh continued to lobby for the games, however, so Taoiseach Eamon de Valera appointed a committee of civil servants to report on its feasibility.

In 1938, it recommended that the event be discontinued. The Tailteann Games came to a disappointing end, but almost a century has passed since then. Perhaps the time is right to revive this historic festival once more. When we are finally able to come together again, what could be better than an epic celebration of Irish sport and culture?