Actor Ciarán Hinds: 'I have a dream of filming in Donegal or Connemara'

YOU mightn’t recognise the name, but you’ve probably seen the face. Ciarán Hinds is that kind of actor.

The 61-year-old could be considered the veritable supporting performer. He’s the safe pair of hands that directors love and his reputation for bringing more than his role should allow has earned him strong parts in a host of modern classics.

Study the face closely and you’ll recognise him as one of ‘the Circus’ in 2011’s Tinker Tailor Soldier Spy. Others will know him as Fletcher, Daniel Day-Lewis’ right-hand man, in There Will Be Blood, while some will recall his downfall as a Mossad agent in Steven Spielberg’s under-appreciated Munich.

His strong CV carries weight on the small screen too. You’ll have caught him as Julius Caesar in HBO’s epic, Rome, while the Belfast-born actor now attracts a whole new fan base as Mance Rayder in the phenomenon that is Game of Thrones.

With such repute as the support, it’s an occasion to find Hinds on the other end of a phone line to chat about a rare leading role.

He heads up The Sea, a rather fine adaptation of John Banville’s Booker-prize winning novel, set in Co Wexford and co-starring Sinead Cusack and Rufus Sewell.

It’s the day after Mother’s Day and Hinds is relaxing in his home city where he’s been spending what he calls “a long-weekend with my antique mother who’s kicking on 94”. In between he’s been doing “the odd interview” to discuss The Sea.

Hinds plays Max Morden, an Irish art historian, grieving after the death of his wife. As part of the process, Max returns to the sleepy seaside resort where he spent summers as a child and sets in motion a series of events that see him revisit the ghosts of his past.

Rewarding as Banville’s brilliant novel is, it remains a complex narrative that doesn’t lend itself to easy film adaptation as it unfurls across three separate timelines — the present, the recent past and an idyllic summer in 1955 when, as a child, Max encounters the Grace family.

“It was complex,” Hinds agrees, “and I always wondered how they would shoot it. They were a long time trying to get the project together. 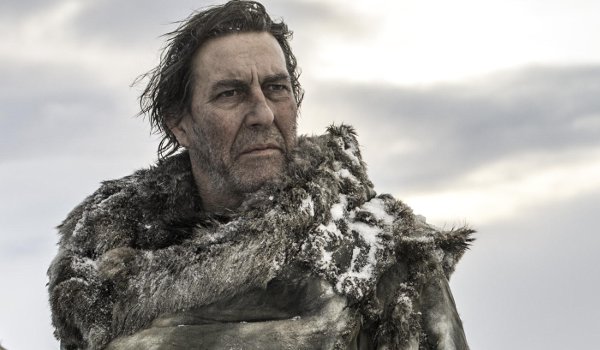 Ciarán Hinds in Game of Thrones

"I was first approached in 2009 or 2008 as to if I’d be interested in playing the main protagonist in the story. They gave me a screenplay that John Banville had adapted himself and I found that it was very interesting.

"Then I met the director, Stephen Brown, and he had a great knowledge of the book and how he wanted to work the film. It was his first feature but he convinced me that it was a project that, not only was he passionate about, but that he had an idea with what he wanted to do with it and that’s what really drew me on board.”

Brown — and particularly his director of photography John Conroy — certainly excel, yet when the project was first announced many were concerned as to if a director with such little prior experience would be able to tackle such a complex narrative. Hinds never shared such a view.

“I had a great instinct and innate belief in Stephen because he knew what he wanted to say and he was passionate about the story,” says Hinds. “I was convinced that he had an idea as to where he was going and you put your trust in that.

“Sometimes when you work with a first-time director you never know where you’re going to end up,” he adds, “but I think that it’s the same for directors working with actors.

Warm of voice, charming and open in conversation, Hinds is surprisingly devoid of a Belfast accent. At best his speaking voice might be termed ‘neutral Irish’. He was 20-years-old when he left Belfast for London in 1973.

It was a time in the city’s history when you might have expected him to have been keen to ‘get out’. But that wasn’t the case, he says.

“It wasn’t that I was particularly keen to get out of Belfast because that’s what I knew,” he says. “I’d been there 19 or 20 years. I’d started university there, did all my schooling and had lots of friends. But there was a lot of stuff going down here in the 1970s and, because you’re young, you kind of feel a bit oblivious to it.

"You don’t understand mortality really. The reason why I left was because there were no drama schools. There were no theatre schools in Ireland at that time so it was a practical matter. I had been studying law in Queens but that wasn’t working out so I looked to get a transfer to study English and drama somewhere.

"I got some advice to apply to drama school because I was interested in theatre. I applied to a few in London and one in Scotland and got accepted into London and that’s why I left Belfast, to go and train.”

Although supported by his doctor father and schoolteacher mother, the decision to pursue theatre must have taken some aback? “It was very, very rare,” he says. “It’s not like today. There weren’t that many boys going into it. I’d played Gaelic football and that in school and the idea of going into plays was seen as a bit sissy. Fair enough.

"I didn’t know many people from my neck of the woods doing it. People would do a little school play or whatever but they had no sense of maybe following it out as a profession.

“Now I see, maybe 40 years on, that the world and his wife is wanting to have a go at acting. It’s extraordinary. There’s a huge outflow of people hoping to get into it and it’s great because they are following their dreams. You just hope that they are going to be able to get along because it’s a tough old calling.”

If it is tough, Hinds, such is his skill, makes it look easy. Get him talking on the finer points of how he does what he does and he will talk passionately about getting “the moments of quiet reflection that get you ready to go. Then it’s a matter of getting the timing right and not wasting the energy; to use it when it’s ready to be caught on camera.”

With The Sea shot in Wexford, he will return to Northern Ireland again in August to shoot season five of Game of Thrones.

“On Game of Thrones I have not yet been roasted, crucified, slaughtered or whatever they do with people in that show eventually, so I will be coming back for shooting again in the fifth series,” he says.

“And I love being back in Ireland. I was quite glad to do The Sea and The Eclipse in Cork with Conor McPherson a number of years ago.”

As our conversation draws to an end, and with all he’s achieved, I ask him does he have any other goals. “I have a dream to sometime get a job filming in the west, somewhere in Donegal or Connemara,” he says, “but you never know.”

The Sea is on release in select cinemas now.