POLDARK is set to return to our screens on 4 September, and with over 8 million viewers in its first season, the second season is set to to truly heat up our Sunday nights - especially with swoon-worthy Aidan Turner at the helm.

Remember this scene? How could you forget.

Here are nine things you may not know about the Dublin-born leading man.

1. He had no idea Poldark existed

Turner admits that prior to being offered the role of Ross Poldark, he had never seen or heard of Poldark and had no interest in seeing the original TV show as he felt it would cloud his performance. Funnily enough, the original Poldark, Robin Ellis appeared in the first season alongside Turner, playing Reverend Halse. 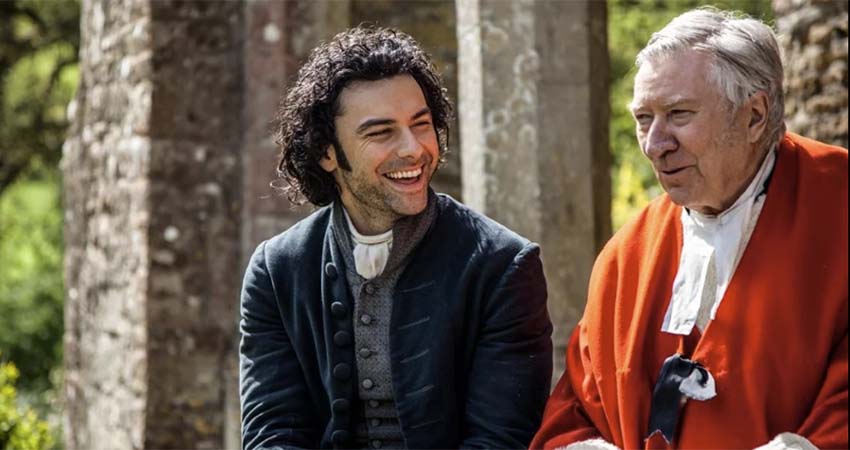 New and Old: Aidan Turner and the original Poldark, Robin Ellis, appeared together in the last season when Ellis had a cameo as a judge. (Source: BBC/Mammouth Productions)

It seems a strange concern now, but show composer Anne Dudley revealed she had to reassure the production company that female viewers would find him attractive. Really?

By his omission, Aidan Turner wasn't academic in the least and tried an apprenticeship with his father as an electrician when he left school. After that, he played guitar but realised being unable to sing would stop him from starting a band. Then, by chance, he came across a poster for Dublin's Gaiety School of Acting and - upon graduating - was inundated with offers of work. One of his primary roles was in a Bord Bia ad on Irish television - and if his frittata is anything to go by, he's a dab hand in the kitchen too.

4. He could be in it for the long haul

Since Poldark is based on the set of 12 novels by Manchester novelist Winston Graham, rumours have spread that Turner has signed on for five seasons of the popular series. Either way, I don't think anyone will complain about having him on our screens for a few more seasons.

5. His famed mane has had some help this season

As Turner had to cut his hair shorter earlier this year for a role, he had to don hair extensions for his reprisal as Ross Poldark. He admits that his hair has become somewhat of a signature in each role he has played and has been eager to change it for sometime.

6. He's no slouch in the saddle

Aidan Turner has said that his favourite part of filming Poldark is being able to work with Seamus, his on screen horse. While Seamus has proven to be a little skittish, he became really in tune with the goings on on set, as Aidan says, "We had to use different words, different code words for "action" on set, because Seamus knew "action" meant "go," so he would just take off when he heard it, all the time. Sometimes it might be "action" and I'd have to take ten beats and then come into the scene for whatever reason, a panning camera move or something, but if he heard that, he'd be off, so we'd have to change words up."

7. He's managed to turn Devon and Cornwall into the steamy southeast

With all the romantic frolicking along clifftops, it was bound to have an effect. In one of the more odd outcomes of the successful series, it was reported earlier this year that fans were flocking to the Cornwall cliffs to recreate Ross and Demelza-esque romances, with romantic breaks up 155 per cent since the first season aired.

8. It's all work and no play for Poldark

Turner has said that while his co-stars can enjoy swimming in the sea during filming, he can't indulge in a quick dip, saying, "if I injured myself the show stops. I remember the crew looking really scared and nervous on my first day, and soon realised that was because it was my first time on my horse, Seamus and with us only just getting to know each other, he was quite nervous too. Only moments later, Seamus stepped back onto the trainer's toe and split it – he was my stand-in so I can understand why they were being extra cautious." No Turner = No Poldark = No injuries please!

9. He is intensely private so as not to take away from his work

In several interviews, it's noted how Aidan squirms when asked about his private life - and it's because he wants people to focus on his acting and his character and not his private life. "I don’t want people to know much about me. It allows me to do more with the characters if they aren’t in tune with what Aidan Turner is all about.” Oh well, we'll just have to keep guessing who his leading lady is...