The How Clean Is Your House host came face-to-face with Nolan for the first time since the pair clashed in the CBB house 18 months ago.

When Nolan's co-host Janet Street-Porter asked Kim whether she was feeling okay about the reunion, Kim snapped: "I don't care one way or the other."

Kim, known for her short temper and eccentric behaviour, entered the iconic Channel 5 bungalow in January 2017 and clashed with her housemates from day one. 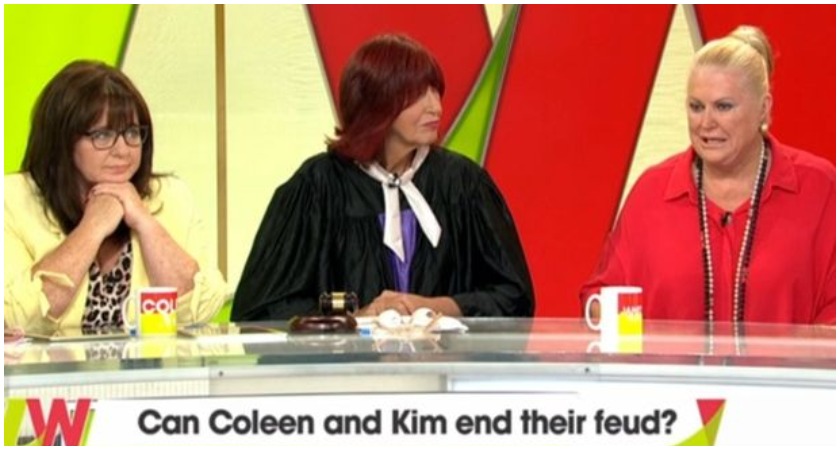 Janet Street-Porter acted as 'adjudicator' during the row (Image: ITV)

She argued with numerous participants including ex-Strictly dancer James Jordan, who mocked her cleaning career, footballer Jamie O'Hara, who she branded an "adulterer", and Spencer and Heidi Pratt - whom she referred to as "evil" and "rotten pigs".

However, it wasn't until after Kim departed the house that she began her feud with Nolan - whom she branded "two-faced" for speaking in the media behind her back.

As things became increasingly heated on-air this morning, Kim said: "I'm not going to converse on this show, folks, I know what I went through".

Pointing in Nolan's direction, she continued: "Folks don't always believe this person who sits all demure" - before branding Coleen and her sister Linda, who was also on the panel, as "trash".

She further branded Linda, fellow The Nolans band member alongside her younger sister, as "talentless".

Coleen conceded that she had been somewhat two-faced to Kim, explaining: "She came in to play an 'oh poor me' card.

"I was trying to keep the peace... we were near the end and I just couldn't stand it in the house."

Things took a more emotional turn on the panel when Kim began to weep while opening up about her troubled childhood.

She recalled how her experiences had severely affected her during her time on CBB, adding that her housemates' bullying had made "all the memories come back."

With tempers continuing to flare, Kim then stormed off the ITV set - branding Coleen "lying trash" and a "con-artist" in the process.

The show quickly cut to a break, after which Coleen revealed that Kim was being calmed down backstage and that she hadn't wanted the interview to end so acrimoniously.

Linda added: "I'm shaking - it was like the Jeremy Kyle show!"