IF you ever needed proof that Dylan Moran is a comedian’s comedian, then it’s a comedian sitting in the row in front of you at one of Moran’s shows.

In this case, the comedian is Simon Amstell, the bratty and wonderfully wordy stand up and writer who Moran can count among his admirers.

The rest of the audience are clearly fans of Black Books, Moran’s bookshop based ‘off-beat’ black comedy.

The show first aired in 2000, made Moran a comedy cult hero and since then you can rarely read anything about the Navan-born man (who fled to London, then Scotland over 20 years ago) without the word ‘misanthrope’ cropping up.

For Off the Hook (his first show in four years) Moran turns vicious Victor Meldrew on not just people, but the machines we’ve become so tethered to.

In Moran’s manifesto, we’ve substituted the church with gleaming Apple stores where we consult with beardy ‘geniuses’ instead of priests and clergy, worshipping at the altar of technology like the faithful little sheep we are.

Refuse, repel and rebel as he may, Moran admits becoming addicted to playing ‘candyflaps’ on his son's phone himself from time to time. 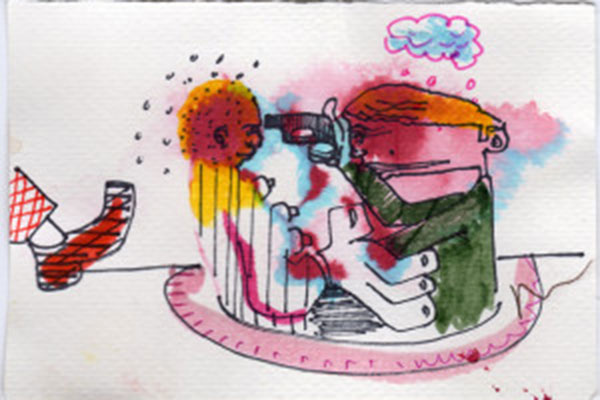 One of Moran's disturbing drawings

Despite his brilliant bumbling bile directed at the everything from the Great British Bake Off (he delivers a lightening Beckettian-style rant about how watching shows about cakes is proof that we’ll do anything to avoid thinking about the inevitability of death) and Nigel Farage (a man who came through a ‘wormhole from a time when gravy was still a solid’), ze Germans, the Polish ('with their names like WiFi codes'), Moran is at his best when he turns the mockery microscope on his own middle-age spreading self.

He mimes stuffing his face full of cheese and pretending to care about the origins of whatever he’s gorging himself with (‘where is this cheese from?).

He admits his wife has (since he packed in the cigarettes), taken to calling his midriff  ‘the situation’, as in ‘take the situation for a walk’.

Moran is in full flow when he gets to the trials and travails of middle aged men (for example, the need for someone to helpfully unstick his balls from the side of his leg when they stick 'like an octopus attached to an aquarium wall’).

Moran may be older, more jaded and less svelte than before, but he still leaves the rest of us in the dust.

Dylan Moran is on tour till October 22, see www.dylanmoran.com

Interview: Dylan Moran Off The Hook