Stuart Neville on his inspirations, latest crime novel and the 'alien world' of being a writer

“IT’S a strange thing. The praise kind of washes over you and it’s the criticism that sticks with you. It’s like a comedian on stage… everybody in the room could be laughing at his jokes but it’s the one guy who isn’t laughing that he will remember.”

Crime writer Stuart Neville is back with The Final Silence, a brilliant new offering to follow up on the success of his previous thrillers, but don’t mention critical acclaim to this 42-year-old Ulsterman. He was lauded after the stunning success of his debut novel The Twelve, but says a writer is only as good as their last book.

“It’s all very short-lived. The more critical things stick with you as time goes by. That’s writers and creative people in general. You are always looking to improve. You want what you are doing now to be better than the last thing you did.

His latest novel tells the story of Rea Carlisle, who inherits a house from an uncle she never knew, but the property contains a dark, grisly secret. One room is locked and when she finally opens it she finds a table, a chair and a leather-bound book containing the hair and nails of murder victims. It’s a mystery that requires Det Insp Jack Lennon to solve it. 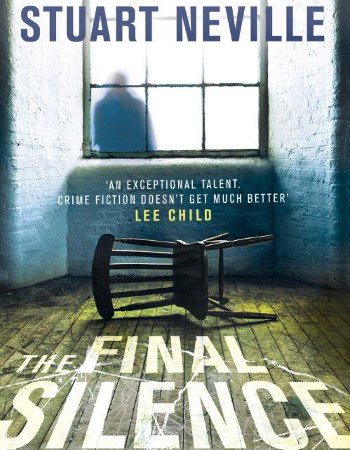 “It’s a different novel to the previous books, it’s more character driven and doesn’t have such a high body count. I’m hoping it will broaden the readership. I guess the earlier books are quite ‘blokey’!”

Praise for the latest work by Neville has been quick to come, but where does he keep getting these dark plotlines from? (Previous works like Ratlines, Collusion and Stolen Souls have all been gripping, murky crime reads).

“Ideas come from all sorts of places; most writers will agree that ideas evolve. There’s a circus of ideas and the difficulty is figuring out if an idea is going to make a novel or not. It could be something that has annoyed me or made me laugh or scared me. It’s hard to pin down… ideas come from all over the place.

“This afternoon, I’m sitting in my office at home writing, but sometimes I go to the local library and use the study room there if I really want to concentrate. I put my music in and zone out the rest of the world, away from the distractions of the internet. I find the library very good for keeping that kind of stuff out.”

Neville held down several diverse jobs over the years before getting his writing break and reckons that the experience has stood him in good stead, rather than had he made a breakthrough much earlier.

“Writers tend to drift around in life until they finally end up writing stories for a living. The experience has served me well. I know there are some very good writers who are published in their 20s, but most people need a few miles on the clock before they can write very well.

“A lot of writers want to write one novel and flog it to death, where they really should be writing their second and their third.”

Next up for Neville is the prospect of a TV adaptation of his novel Ratlines, with RTÉ already working on making it into a hit television drama.

He added: “It’s exciting and it’s an interesting process for me to be involved in. It’s a new experience to be talking to production people and discussing budgets and schedules. They’re the kind of conversations that a novelist doesn’t normally have. Most projects in development never get any further, so we’ll just have to see. But it’s exciting.”

Neville is Armagh-based and cites the American crime writer James Elroy as someone who has shaped his writing career.

“James Elroy I look up to. I’m reading his new book at the minute. He is the most important influence on me, I would say and he has been very kind to me. We share the same agent and I have got to know him and he is a very generous man.

“We have spent time together in different places, most recently in France, and he has been very generous to me. He’s an unusual character, eccentric you could say. I just hope he likes my stuff, we get on very well.”

So what advice would he offer to any young person who picks up one of his thrillers and thinks they have it in them to write a crime novel?

“Just get cracking! And be prepared to write a lot before you get anywhere with it. My first novel to be published was actually the third one that I had written. The first two were just not that good. I never tried very hard to get either of them published. I felt in myself that they were not good enough. There wasn’t a serious effort to get them to an agent or a publisher.

“I felt I had the resolve in me to try again and to try harder. Everything fell into place with The Twelve and from that I learned the mistakes of the first two. I knew once I had finished writing it that it was different and I knew it would open some doors for me.

“The first thing people ask when they hear I’m a crime novelist is ‘have I heard of you?’ I’m not sure they understand what being a writer is like or where books actually come from. It’s an alien world to a lot of people, but they are always interested in it. They’re curious about what you do and how you do it.”

The world of Dublin gangland criminals always attracts media headlines, but it’s not one that Neville has any interest in delving into for future books.

He added: “It’s not my territory but there are several very good Dublin-based writers who are already working in this area and it is proving to be fertile ground for them. North of the border we are finding our own voice up here.

“I’m now working on the sequel to The Final Silence and I’m about two-thirds of the way through it. I’m hoping to have it finished by the end of the summer.”

The Final Silence by Stuart Neville is published by Harvill Secker