IRISH music fans will no doubt be happy to learn that Fleadh Week — a new celebration of the Emerald Isle’s greatest bands — will be taking place in London in October.

The week-long live music event will be held at Nell’s Jazz & Blues, a live music bar and club in West Kensington. 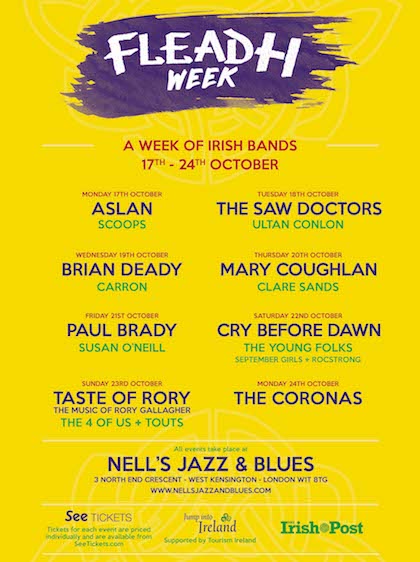 What's on at Fleadh Week

For eight consecutive days, a host of both well-known and budding Irish talents will take to the stage, some of whom will be performing in Britain for the very first time.

Acts include The Saw Doctors, Aslan, The Coronas, Mary Coughlan, Paul Brady, Cry before Dawn, The 4 of Us, Brian Deady and a host of up-and-coming groups.

Fleadh Week runs from October 17-24. Saturday 22 and Sunday 23 will be a multi line-up all day starting from 2pm till midnight.

The music festival is being organised by music promoter and festival owner Vince Power, who has teamed up with The Irish Post who is the event's media partner.

“This will be eight days of the best of Irish bands," the Co. Waterford man said.

“Vince Power continues his strong tradition of bringing the best Irish acts to the Irish community here in London.

“It is sure to be an action-packed week for all involved and The Irish Post — as the voice of the Irish community here in Britain — is proud to be able to support it.”

For more details and to book tickets click here