JOHN BANVILLE is sitting peacefully at the window of a plush hotel restaurant with a serene view of Princes Street and Edinburgh Castle. As he glances out over the grandiose city it could be a moody scene from one of his novels.

The writer is in fine form and delighted to be in Scotland’s capital after his last trip was cancelled due to a thunderstorm. There was no such dilemma when he arrived for the world premiere of The Sea, a big-screen adaptation of his 2005 Booker Prize winning novel.

Shot on location in Wexford it features Ballinesker Beach, a spot which holds particular resonance for the 67-year-old scribe.

“It’s filmed at the beach but I actually wrote it and based it at Rosslare Strand which is further up the coast,” he says. “It’s the same place where they filmed Saving Private Ryan. There’s 20 miles of unspoiled beaches up there, it really is a beautiful place.

“The story is based on my childhood summers in Rosslare and the girls I fell in love with when I was an 11 year old boy. It’s not directly autobiographical, there was no specific family like there is in the novel but I built it up from atmosphere and general memories of the past.”

“He falls in love with the mother and then the daughter of the family,” Banville says. “He kind of falls in love with who they are; people that drink wine, this is a sophisticated world that he is deeply attracted to, for me it has the added nostalgic factor.”

Undoubtedly there is an evocative and wistful quality to The Sea which sets out to capture an Ireland which now only exists in the imagination.

“The film looks and sounds so much like my childhood summers by the sea in the 1950s,” he offers.

“I think the past is the most productive material that we have, now that I am tottering on the brink of old age the past becomes more and more vivid for me and I suppose more of a refuge.

“I’ve always been fascinated as to why the past is so powerful and why it’s so much more vivid than the present; what gives it that luminous glow for us, just because it is the past. I don’t understand that and I wouldn’t want to understand it; it’s very productive for me as a novelist.”

The film’s protagonist, Max Morden, is an art historian played by Belfast actor Ciaran Hinds. Max struggles to come to terms with the death of his wife and returns to the Irish seaside resort he visited as a child where his past is as unresolved as his present.

It’s a haunting and, at times, disturbing piece of cinema. Banville admits he was relieved when he saw the finished production by director Stephen Brown.

“I saw the film in Dublin a few months ago and was thrilled,” he says with a smile. “I was worried about how they would handle such a complex script but they did it beautifully.

"I had no involvement after I finished the script, I handed it over to them and from that point it was their baby.

“I think the main strength of the film is the clarity of the storytelling which is done very well by the director and editor, there’s not much plot and not much happening in it but they’ve turned it into a wonderful mood piece, it’s all to do with silences and glances exchanged.

"It’s very subtle and beautiful to look at and to listen to, the sound is very good.

“The main character is in a bad way and he’s in a bad place, he’s drinking too much, like so many Irishmen, but he’s in the process of saving himself.

"They say that grieving takes a year at the least and he’s going through that year of trying to get over it and in some way come to terms with the loss, at the same time he’s revisiting losses in the past as well.”

“It’s such a strange thing (death) we’re all here and suddenly one of us is gone, it’s a strange and disruptive occurrence. He obviously still loves his wife and she loves him in that strange way that people do that have been married for decades.

"They do manage to love each other but he’s also very selfish, he’s constantly worrying about himself.”

The Sea is not the only one of Banville’s works to make it on to the big or small screen this year.

Building on the success of last year’s Glen Close drama Albert Nobbs (which he co-wrote with Close), the next few months will see a number of projects associated with the writer reach fruition.

One of the most anticipated is the BBC’s adaptation of his Quirke novels, written under the pen name of Benjamin Black.

The BBC series will feature Irish actor Gabriel Byrne in the role of the loner Dublin pathologist with a penchant for drink. The pairing looks set to be a perfect match.

Banville admits he is “very excited” to see Byrne as Quirke after viewing the first episode. Once again the screen captured a place in his imagination, this time a noirish 1950s Dublin. 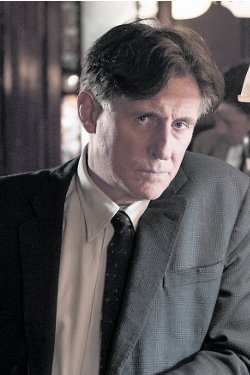 “I’ve seen the first episode and I’m looking forward to seeing the next two, it’s been adapted by Andrew Davies and Conor McPherson and they have done an excellent job,” he says.

“It’s very good, very good indeed. It creates Dublin in the period with extraordinary clarity, it’s very atmospheric. It’s a different medium (writing as Benjamin Black), he’s a craft man and this is craft work, I enjoy doing it and I’m very proud of the work.”

Banville has written non-fiction only once as part of the Writers And The City series where he contributed Prague Pictures: A Portrait of the City. He admits that his life story isn’t something he’d consider writing.

“I doubt I’d ever write an autobiography,” he offers.

“I’ve been doing fiction for so long I’d find it hard to do anything else now.I love writing for the screen, I wrote a screenplay based on one of my novels for Channel Four in the 80s and I adapted Elizabeth Bowen’s novel, The Last September, which was directed by Deborah Warner.

"It’s a completely different process, there is no comparison between writing a novel and writing for the screen, writing a novel is very slow and meticulous, you’re scratching away at the page for years.

Writing a screenplay you have to be spontaneous, the more you labour over it and the more work you put in, the duller it gets.”

It’s fair to say, there’s never a dull moment in the life of one of Ireland’s most celebrated living writers. Last year he delivered Ancient Light, which he’ll be discussing at the Edinburgh International Book Festival next month. Significantly it shares a number of themes with The Sea.

“I’m looking forward to the Edinburgh Book Festival,” he says. “I was meant to be here last year for Ancient Light but there was a storm and I couldn’t get here. I’ve been to the book festival about four times and I love it.

"The Edinburgh festival itself is amazing but the book festival is something special.”

Today Banville is based in Dublin having lived in London and briefly America; significantly he retains much affection for his home-town of Wexford.

“I still go back to Wexford and further south to the Hook Peninsula, it’s very beautiful down there and largely unspoilt but there are too many tourists now, tourism is spoiling the world!

"Why don’t they stay at home, home is much more interesting than abroad! I go there and to west Cork which is beautiful.”

In 2005 Banville received the Booker Prize for The Sea, it remains a much coveted award but significantly he plays down its importance.

“There’s the childish pleasure in getting a prize,” he says, “it’s as if you’ve been given the biggest red fire engine for Christmas. It has no effect on the work or the way one writes whatsoever. It would be disastrous if it did; I look at every prize as a consolation prize.”

John Banville – The World As I See It will take place at the Edinburgh International Book Festival on August 12 at 1:30pm in the Baillie Gifford Theatre.

Quirke will be screened on BBC1 from August 24th.

The Sea will go on general release in September.

Stag do ends with some sore heads... but not from a few too many