FIRST DATE nerves are normal, but for Northern Irish man Damian, his nerves have an unfortunate side effect.

On the return of Channel 4's hit programme First Dates last night, we were introduced to Damian, 25, whose nerves trigger his Tourette's syndrome.

Upon entering the First Dates restaurant, Damien's tics were apparent with a series of clicking and whistling.

He involuntarily said to the barman, "I'm on loads of drugs!" He was quick to clarify that he is not actually on any drugs.

The Derry man, who now lives in Brighton, was matched with businessman and part-time model Kai from Manchester.

Damian has said his Tourette's syndrome makes him nervous as, "someone could see the Tourette's and just think, 'Oh dear Jesus Christ' and walk away." 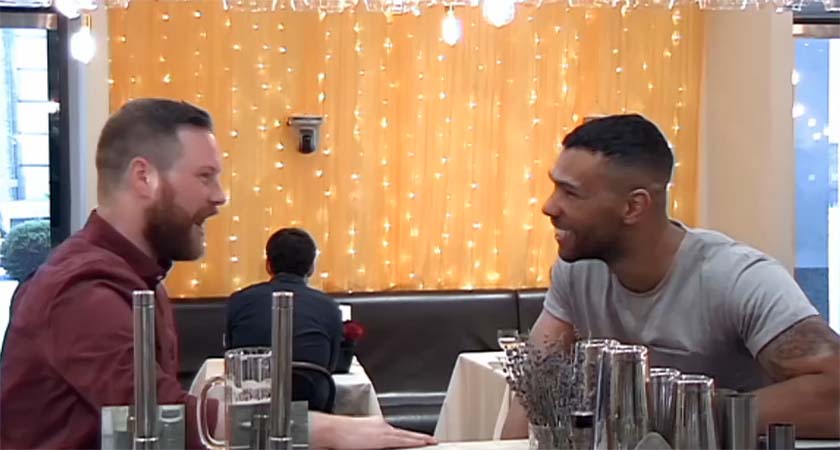 Damian's tics were irrelevant to blind date Kai, who was besotted with the Derry man. (Source: Channel 4)

Damian says he developed the syndrome after a bad break up in 2013.

"I took that break up really hard, I just didn't think I could cope. It was at that time the tics started, I couldn't even speak because I was just ticking all the time.

I saw my dad getting upset [about the ticking] so I just decided the best way to kind of cope with this is to joke about it."

"I don't know if it will stay or go," Damian continues, "I've made peace with it. Either way I've changed and that's not necessarily a bad thing."

Whilst Damian's date Kai seemed smitten with him, Twitter erupted with an outpouring of love for him.

According to Channel 4, Damian and Kai are still going strong. They've apparently had series of dates and have each been introduced to their respective families.

Check out the responses to Damian's appearance on First Dates below...

Damian is so cute 😩 #FirstDates

So we're all in love with the beardy guy Damian from Derry, right?#FirstDates

Damian and Kai are just adorable. The only way they could be cuter is if they were puppies. #firstdates