FOR Joe Crilly and for many of my other friends, it all began in The Irish Post around the turn of the millennium.

I was a jobbing news reporter in the paper when Joe joined in 1999 as arts editor.

He had no experience as a journalist, but he knew what being an artist was about.

By that time several plays of his were staged. He was also a working actor - whenever he could get work.

He understood the struggles, the disappointments, the minor triumphs and the fillip a feature in The Irish Post could give an artist.

I returned to Ireland in 2004, but we stayed in touch.

Three years ago I was on a flying visit to London when I considered calling in on him. As often as time would allow, we met for pints and banter either in London or in Ireland.

Joe was marvellous company as he rolled cigarettes and spun yarns in that Armagh baritone of his, hardly leavened by 30 years living in London.

This time, though, I decided to forgo the pints and the banter. Pints meant hangovers and I wanted to keep a clear head.

There were promises to keep and miles to go before I sleep and there would always be a next time.

But there was no next time.

A few weeks later, Joe left his apartment in London and took a flight to Barcelona. He left his phone behind him.

His friends and family panicked and posted messages on his Facebook page urging him to look after himself.

Though he left home without what is effectively a tracking device, Spanish police managed to find him.

He reassured them he was alright and just needed time to think about things and clear his head. The police let him go.

Joe took a train across the border into France and ended his life in a hotel room in Perpignan.

He suffered from periodic bouts of depression.

He would state matter-of-factly that he was on medication and it was under control. He died in May 2017. No one of us suspected it would ever come to this.

When somebody dies by suicide, immediate thoughts are for his or her closest family members - in this case his son Redmond and his large loving family of brothers, sisters, nieces and nephews.

Was there something I should have done differently?

Many of us who were friends of Joe asked themselves the same questions in the aftermath of his death. 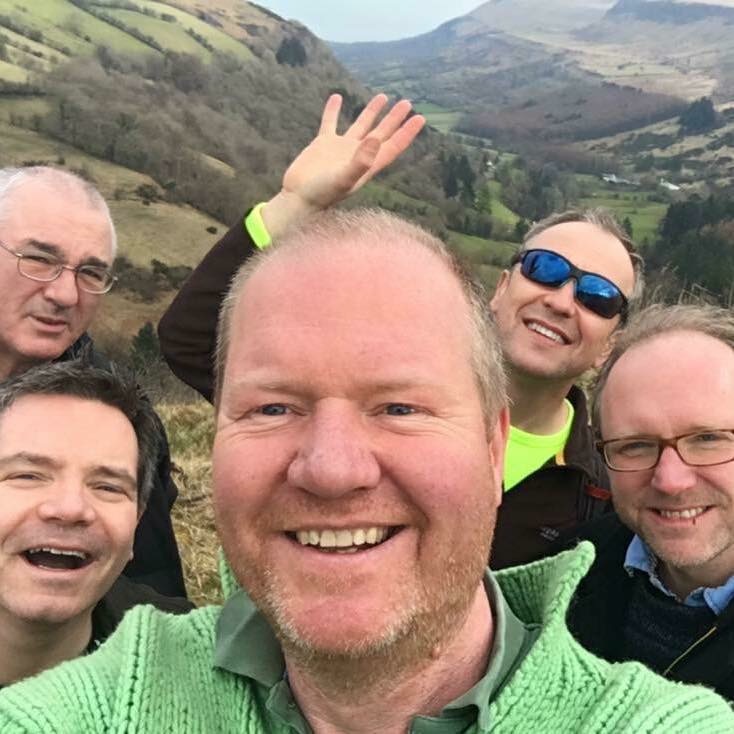 There was a group of us former Irish Post employees who would meet up once or twice a year to go walking and talking.

They included Martin Doyle, the former editor and now arts editor of The Irish Times, Michéal Coughlan, the founder of Rí-Rá magazine and David Smith who was a sub-editor with The Irish Post.

I used to joke that the photographs we took resembled an ageing indie band getting together for one last tour.

The previous autumn we went walking in the glens of Antrim.

Joe didn’t need to discern the colour of the paving stones to know the character of every village we passed through.

Like many exiles, Joe was fascinated and appalled by the North he left behind.

Perhaps, nothing or nobody could have lifted Joe out of the fathomless pit of despair he found himself in when he took his own life.

If those who die by suicide could see the pain they leave behind, would they conclude that life was worth living?

I used to believe that as people got older, they learned to cope better, to be more comfortable in their own skins and to come to terms with the vicissitudes of life. Joe’s death at the age of 55 disabused me of that belief.

His remains were taken home and buried in the churchyard of Ballymacash near the shores of Lough Neagh where he grew up.

It was at a sombre post-funeral gathering that I suggested we put together a collection of his plays.

This is the origins of The Crilly Trilogy. 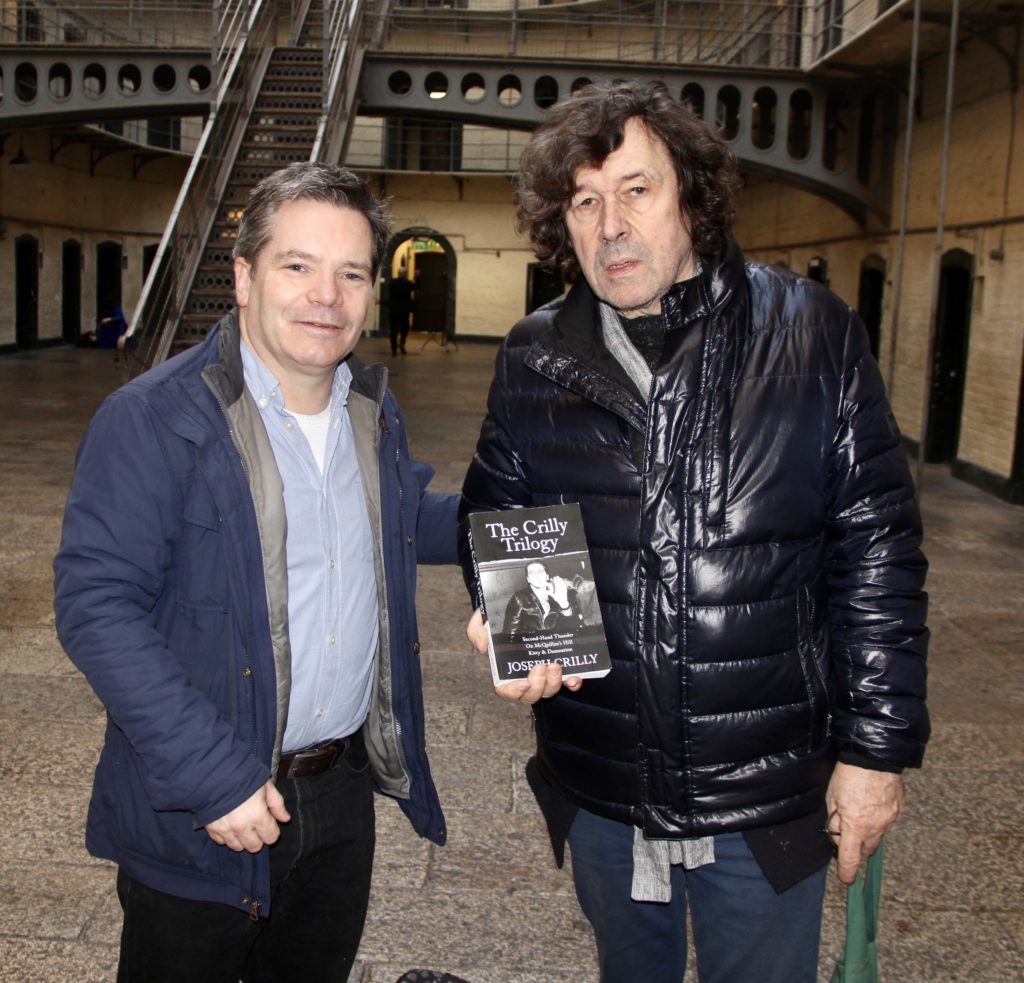 Ronan McGreevy and Stephen Rae, who has supported the campaign to honour Joe’s work

Joe was always a friend of mine first and foremost.

I knew of his reputation as a playwright, though I had never seen any of his plays.

His two plays produced each side of the millennium, Second-Hand Thunder and On McQuillan’s Hill, garnered such good reviews that he was profiled in The Guardian and The Irish Times.

At that time, I had naive pretensions of being a screenwriter. Joe sent me an early draft of the third play in the trilogy, Kitty & Damnation, which was eventually produced in 2009.

Joe had a facility with language which is unique and because it is unique, it is extremely rare.

There is a baroque quality to much of the dialogue in his plays, though they are always accessible and extremely funny.

I read Kitty & Damnation with envy.

“I’m only fooling myself,” I concluded of my own ambitions.

Joe left the North in 1982 as a teenager, but the North never left him.

Second-Hand Thunder and On McQuillan’s Hill are contemporary to many of the issues happening at the time.

Second-Hand Thunder is loosely based around the terrible nonsense that went on at Drumcree every year and On McQuillan’s Hill on the large-scale prisoner releases which went on after the Good Friday agreement.

Joe had no time for sectarianism and regarded its perpetuators on both sides with equal distain.

I put The Crilly Trilogy together over the period of some months.

Everything I asked for from others, I got.

Hugh Bonneville, one of the most in-demand British actors, from Downton Abbey to Paddington, supplied a preface.

He and Joe had been contemporaries from the National Youth Theatre in London.

“I was blown away by the tumbling, lyrical flow of language and the relish of telling a tale,” Bonneville wrote.

Stephen Wright, Joe’s first producer and now a successful TV producer in London, and the actor Ruairi Conaghan chipped in with introductions to his plays.

Redmond Crilly wrote a beautiful tribute to his father.

Dr Mark Phelan, a lecturer in drama at Queen’s University Belfast, contributed an opus of 6,000 words identifying Joe as a significant dramatist whose work deserves to be taken seriously.

I had little difficulty crowdfunding the book.

Those who knew Joe’s work thought it was a good idea.

Others contributed because they knew Joe as a great guy.

In his latter years, he worked for the Peabody Trust and at the launch party in London in 2018 they unveiled a plaque to Joe outside their headquarters.

I suggested at the launch that The Crilly Trilogy was a nice tribute, but the real goal was to restage his marvellous plays.

I knew this would be a task of a different order of magnitude to a book and with no certainty of success.

I exhorted those who cared about his memory to make it happen.

Fortunately, others felt the same way.

Tom Aarvold, a friend of Joe’s, began putting together a production team to bring On McQuillan’s Hill to the stage. That is now happening. Despite its darker than dark humour, On McQuillan’s Hill is gloriously funny and pointed. I’m sure it will be a big success.

The restaging of one of his best plays in a prestigious venue like the Finborough Theatre in Kensington and in a city where he spent the best years of his life would make the big man, wherever he is now, very proud.

On McQuillan’s Hill by Joseph Crilly runs at the Finborough Theatre from February 4 - 29 from 7.30pm with matinees on Saturday and Sunday at 3pm. Click here for tickets.

The Crilly Trilogy can be purchased online here.