"What do you mean you didn't like our old stuff?!" - The Coronas' Danny O’Reilly on the past, present and future of the band

THE CORONAS have had a successful year already—with the release of their newest single ‘Find The Water’, recording their album in Los Angeles, and upcoming shows in London and New York, the Irish four-piece should already be able to put this year to bed as a success.

But, as frontman Danny O’Reilly tells us at The Irish Post, the goalpost is always moving—and they have a few more milestones to smash.

Irish Post: Tell us about your new single, ‘Find The Water’

Danny: We had a few songs prepared and ‘Find The Water’ seemed like a good starting point as a single. It was a bit different for us. This will be our 6th album so we felt it was a nice change of pace-- it’s a different vibe but still sounds ‘Coronas-y’.

It’s not exactly catchy radio vibes, but we like the song and we’re proud of it. Thankfully it’s getting a great reaction-- friends are sending me texts saying “I didn’t really like your old stuff but I like the new single.” I’m like “What do you mean you didn’t like our old stuff?!” *Laughing*

Irish Post: You’ve been together for a long time and you’ve grown—does this album reflect that?

Danny: Yeah, it just evolved naturally. When we sit down to make a new album we never say “we need to make it sound more like this or like that”—we just write as many songs as we can, throw them all in a pot and whichever we like the most that’s the direction the album goes.

We all listen to different types of music, and our influences come together to become The Coronas. We let the songs lead us and that’s what we’ve always done-- thankfully it’s working out for us so far.

Irish Post: You have a sold out London show and three nights in a row in New York, what led to that?

Danny: We’re still writing the album and we wanted to try out some new songs to see how they’re going down. But not too many because you don’t want to just play new songs. I used to hate going to gigs where the band would say “We’re gonna play you some new songs!” and you’d be like “Nooo, play the hits!”

But I think we’re at the stage now where the crowd who come to see us are happy to hear new music and see what we’re working on. So we’re doing the Camden Assembly and have three nights in New York’s Mercury Lounge.

Hopefully the album will come out early next year-- then we’ll do some proper touring. A full Ireland and UK tour around April and likewise in America is on the cards. 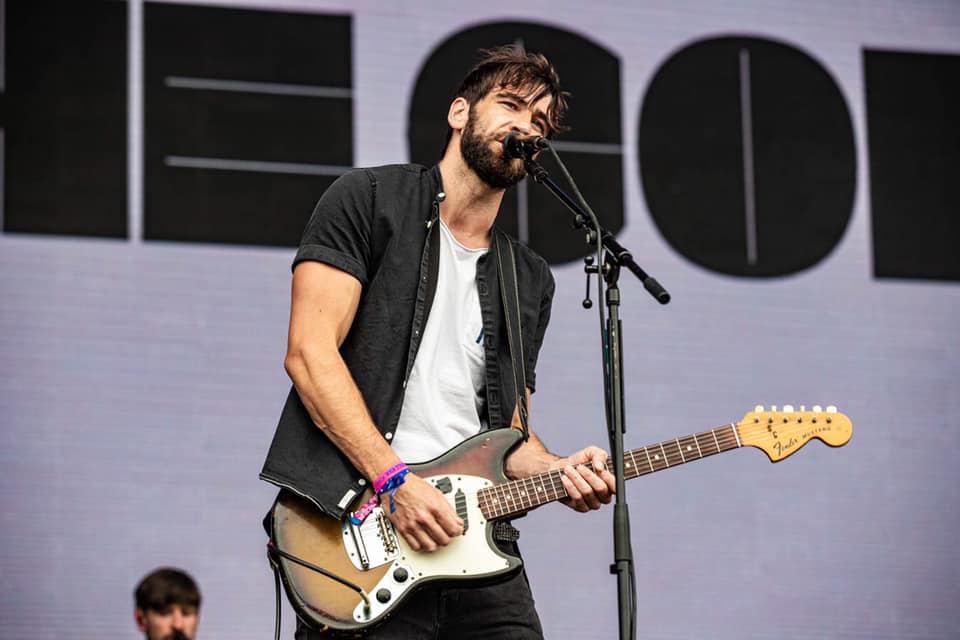 Irish Post: Ye have a full year ahead so...

Danny: We had a band meeting in January and were able to plan out the next two years! We started our own record company with the last album so we’re a lot more in control about the music and how we want to tour. We feel lucky to be able to do it that way—a lot of bands are in contracts they’re not happy with and they’re not able to promote their music the way they want to or even make the music they want. We’re in a lucky situation where we’ve been around for a while and we can release music we want.

Irish Post: Back when you started as a band, what was your ‘I made it’ benchmark?

Danny: When we started initially all we wanted to do was play Oxegen festival. When we were teenagers and just punters ourselves a few of us went to the festival and somehow blagged our way into the VIP section. We were just sitting there thinking “Imagine we ever got to play at this festival” —and two years later, we did. We opened up the second stage and that was amazing.

We’re still ambitious—we’d like to really take off in another country. It’s going well in a lot of places, like in Australia there’s plans to play Sydney Opera House which would be another ‘Bucket-List’ gig.

Irish Post: You’ve played all over the world—do you notice any difference in the culture of the crowd when you play internationally compared to at home?

Danny: Definitely, every country is different. In America they’re more reserved, they stand back and watch you-- it’s not like the crowds at home where they’re up singing along atop peoples’ shoulders. In Europe it’s even more reserved, more-so than America. They’re respectful, they go mad at the end of the song but they really listen to you.
We’re really lucky that we get to travel the world and experience this.

Irish Post: I won’t ask you about your favourite place to play in the world in case anyone gets jealous...

Danny: *Laughing* I did a podcast recently where the host actually pushed me on my least favourite city to play in. I wasn’t even specific, I just mentioned an area in the US and had people on twitter saying “I can’t believe you said that!”

Irish Post: I promise I won’t try and trap you like that! What are ye most proud of from your journey so far?

Danny: I suppose the fact we’re still doing it is definitely something to be proud of. We’re still releasing albums and selling shows, and we’re still mates—we started the band as friends, we were friends before we could even play our instruments and we decided to go on this journey together. That we get to call this our job is something we’re really proud of.

For me, getting messages from people saying our songs have affected them means a lot to me as a song writer.

Irish Post: You’re so positive you might have no regrets—but is there anything you’d go back and change?

Danny: We recorded our first album very early on where we had barely toured outside Dublin, never-mind outside Ireland. I always wondered, what if we had held off on the first album and instead released an EP or something? But there was a charm to our naivety and it worked for us.

Irish Post: When you first started did you find the Irish music scene to be accommodating to new acts?

Danny: We came along in a time where there was a lot happening for Irish bands on the Whelan’s scene, but we didn’t really feel a part of that clique. We were a student band and our song was about sleeping all day and drinking all night-- it gave us a thick skin, but we were always welcomed everywhere we went.

Danny: There’s always a good atmosphere between Irish bands-- everyone looks after each other and there’s no bad vibes, even between different genres. We did Citadel festival last weekend and went to see Fontaines D.C., they were great and we met the lads after and they were really sound. Even though our genres are miles apart we have the Irishness in common so we all support each other. It’s nice when you go away and can see another Irish band and say hello.

Irish Post: Any advice for young Irish bands looking to chase your success?

Danny: When we started it was different. Everyone was buying albums, and there was no downloading, never-mind streaming.

But I’d say to make the music that moves you. Don’t think about what’s cool or what’s in the charts at the moment. Write the music that inspires you. Write your own music, practice a lot, and get a good manager. Do it for the right reasons. Don’t go into the industry ‘cos you want to be famous. Do it because you love making music. That’s the most important thing.