In County Down Slieve Donard is the highest of the Mourne Mountains.

Irish mythology dictates it's a gateway to the Otherworld, a luxury hotel named after the famous peak is a bastion of Victorian splendour and it's a more than suitable location to meet a living musical legend - Sir Van Morrison.

Lately Morrison has performed on the landmarks of his life; Orangefield High School, the Europa Hotel and the magical tree-lined Cyprus Avenue to celebrate his 70th birthday last year.

Sir Van, who was knighted in February, was relaxed and engaging when explaining what it's meant for him to return to the source.

"It's great because it proves a lot of clichéd stuff wrong like a prophet is never accepted in his own country. I'm not saying I'm a prophet but they used to say that about myself or George Best that we were not accepted here. I think this shows that's wrong because I've come back and been very successful doing these local shows with the help of the East Belfast partnership."

The Van Morrison Trail has also allowed tourists to experience Belfast through the eyes of a composer who has written some of the most popular songs of the last century while recalling places from his childhood. 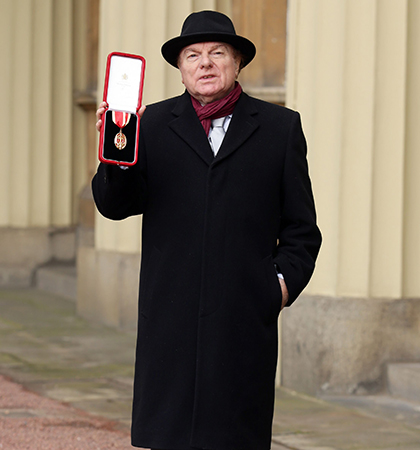 Van Morrison at Buckingham Palace, after being knighted by the Prince of Wales on February 4, 2016

"Yeah the Hollow (featured in Brown Eyed Girl) was from memory, it's a very small area, that was all fragments in the subconscious, years later something will come out in a song. I might not know myself until someone else points it out or something will cognate in me, that's really what that is."

Keep Me Singing presents a fresh perspective on some recurring themes. Caledonia, Latin for Scotland, has often provided a muse for the writer, this time on Caledonia Swing.

"It was originally called Ulster Scots Swing and I changed it", he explains.

"They are interchangeable; it could be either. This part of the world has a lot of people that are called Ulster Scots; they don't consider themselves to be Irish, even though it is in Ireland their identity is Ulster Scots. Even if you go back to my mainstream history lessons at school the curriculum for history taught that the Scots came from here and when they went to Scotland they called them Scots but they were from here originally, Caledonia Swing is my own take on it. Before I was calling it Celtic Swing but that's because I was buying into the mythology of the Celtic thing which I'm not anymore. That was an invention by a group of people around W.B Yeats; sometimes it takes a while to find out who you are because it's covered up in layers." This is your 36th studio album, is it a challenge to continue writing and recording with such an extensive body of work behind you?

"It is when you have a massive catalogue because is there a need or want to do it anymore kind of thing? You have to question that all the time. In jazz or country it's all about saying something, Hank Williams had something to say, quite a bit, if you feel like you have something to say you want to get it out there and get it out of your system."

Last year Sony's Legacy Recordings acquired half a century of Morrison's studio and live recordings allowing a new digital platform. It's Too Late to Stop Now is universally lauded as one of the greatest live albums of all time, as well as the reissue a further three volumes were granted release. "They just wanted to put out everything and I said 'fine', I gave them the go-ahead. It's basically a Sony project; I don't have anything to do with it, I don't have time to listen to ten hours of music. "You have to find a vehicle for the new material and then the old stuff, they just want catalogue so I've spilt it up where the catalogue is with Sony and the new stuff is on Caroline because they seem to want the new album-time will tell but that's the reasoning behind it."

It's been surmised that these transcendent performances as bandleader of the Caledonia Soul Orchestra led to burnout in 1973 bringing this breathtaking live act to an abrupt end, but the singer counters there were other reasons.

"There was exhaustion right after", explains Morrison, "but everybody regrouped and it wasn't really meant to stop there. What happened was the piano player (Jef Labes) was functioning as my musical director because it was a bigger band; he sort of did a runner and wanted to change his life. He stopped playing music for a while and took off. When he left, and I don't know why, it's not really clear to me; he wasn't doing music at all. He went abroad somewhere. He was like a catalyst for me, we had been playing with the same band for a long time, I met him in Woodstock in upstate New York (1969), this band had developed over a long period of time-it was like telepathy, in fact it was telepathy, there was a lot of reading what each other was doing so when he jumped ship it kind of just wasn't the same because he was an integral part of it. It was meant to continue on after that. We sort of made a comeback when we played Montreux in 1980 and then he worked on Common One."

The reissues have allowed fans to hear other long out of print albums such as Veedon Fleece, while Morrison's writing has often absorbed the landscapes of the North, this 1974 release was an immersive, esoteric journey into the countryside and culture of Southern Ireland. It constantly feels like the singer is trying to unlock something on his journey.

"It felt like that at the time, there was something going on in that it was like writing a short story and to me it was similar to Astral Weeks because that record was also written like short stories."

It has a pastoral and country feel in parts elsewhere the drama is driven by the mythological Linden Arden character, and unusually you sing falsetto on Who Was That Masked Man? "Of course, yeah I forgot about that, I was listening to Smokey Robinson a lot actually and I thought let's have a go at this and see if I can do it; I just wanted to try something different."

To quote from the album it seems that Sir Van Morrison will continue to tread his own idiosyncratic path "going as much with the river as not".

Van Morrison performs at Slieve Donard on August 21 - 22 and has seven UK dates planned in the autumn. Keep Me Singing is released on September 29th. For details click here

Lionel Richie announces concerts in Dublin and Belfast as part of his Hello! 2020 tour