Sean McGinley: 'I became an actor by pure accident'

STRONG features and an instantly recognisable face are desirable attributes for any budding actor — Sean McGinley possesses both.

The Gaoth Dobhair, Donegal man cut his teeth in theatre but viewers may know him best for his many TV/film roles as “hard man”.

It’s quite a departure from menacing hit-men and IRA villains. “Well, the peace process put a bit of a downer on all of that!” McGinley deadpans. As we chat, he’s preparing to leave his Dublin home for a six-month stint in Newfoundland, Canada, to film the sixth series of The Republic of Doyle.

Brainchild of Allan Hawco, McGinley describes how Hawco had successfully staged Tom Murphy’s Whistle in the Dark and was seeking a new challenge. An idea he’d had in a pub for a comedy/drama/detective series to be shot in his home town became The Republic of Doyle. Hawco cast the net wide for the part of Malachy, visiting London then Dublin where he unearthed McGinley.

“We seemed to get on pretty well and he offered me the part. It’s a really lovely place to be and they’re a great bunch of people. It’s a bit like The Rockford Files,” says McGinley. “Allan is the lead actor (son), writer and executive producer and it’s shot around his home town, St. John’s in Newfoundland.

"It’s a similar accent — North American but with a kind of Irish flavour. They’re trying to set up their own TV and film industry with a view to making their own movies and telling their story to the world — like we’ve been trying to do in this country for a while. We’ll finish around November. I get over and back a few times and my family get out during the summer.”

For someone who fell into acting “by pure accident” at Galway University whilst studying English and a teaching diploma, he’s enjoyed an illustrious career — one which the Donegal boy would never have imagined possible.

“Where I grew up in Donegal, the idea of becoming an actor would have been up there with being the first Donegal man to land on the moon. It was not a possibility. I didn’t know anyone who was an actor.

"I’d never seen a professional production of anything. So coming to Galway was fortuitous for me. If Druid hadn’t started, I don’t know if we’d be having this conversation. I might be a teacher or something.”

The now internationally renowned Druid Theatre Company was just starting up then. A friend asked McGinley to accompany him to an audition for a play, The Form, by N. F. Simpson, as he didn’t want to go alone. McGinley duly did so and landed the part himself, a life-changing accident.

“I’d been to some Druid plays and thought they were brilliant” recalls McGinley. “I did this play and people from Druid happened to be in the audience. A few days later I bumped into one of them and they asked me to audition for Druid. I thought it was a windup. I ended up in a production of Playboy of the Western World in 1977. I finished college and was asked to do another play for Druid, then another. And, however many years later, here we are.”

An appearance at the Edinburgh Festival in 1980 with Gary Hynes’ Island Protected by a Bridge of Glass catapulted Druid to international recognition. “It was a bit pretentious, we were young” McGinley laughs quietly. “De Dannan did the music — amazing music — and performed every night with us. It won Fringe First and awards for best music.

"National newspaper reviewers started coming and Druid became the focus of attention in Ireland and went on to gain an international reputation, returning to Edinburgh in subsequent years with Tom Murphy plays, and London. There were great people working with the company. It was great experience, and great training really.” 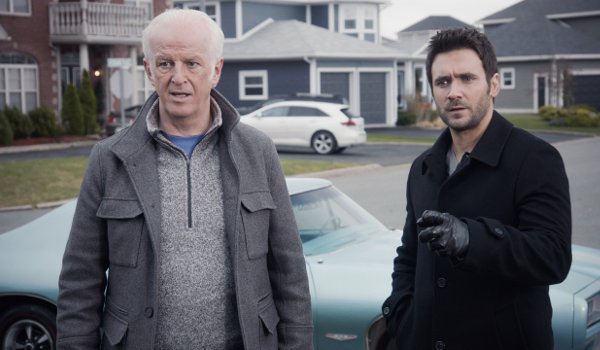 McGuinley in The Republic of Doyle with Allan Hawco

With no drama schools in Ireland at that time, anyone wishing to become classically trained would have had to go to New York, Paris or London, as inaccessible as the moon, so universities offered a route into acting. Was that move, instead of teaching, frowned upon by his family?

“I didn’t know it was going to be long-term. My father was posting me application forms for teaching jobs but I just stuck with the plays. When you’re 21, you’re immortal. You pursue whatever you want and I was lucky enough to be doing plays. None of us were making any money but we were surviving. We were living in the moment really.”

McGinley’s mother, an Irish speaker from the Gaeltacht, Donegal, was an early inspiration. “My mother was a primary school teacher and taught myself and my two brothers. She used drama as a teaching method for history, geography, Irish and English. We’d make little plays about stories — she might have been a bit ahead of her time.”

The drama festival in his home town of Ballyshannon, for which he has great praise, provided his first exposure to seeing plays and is still going strong 50-odd years later. “There’s a great bunch of people doing great work, running drama groups and festivals — the Allingham Arts, Folk Festival and the Rory Gallagher Festival. It’s a great little town.”

McGinley’s generation grew up on TV and movies, another early influence. “We had our favourites — Brando, Al Pacino and TV shows like Columbo. Peter Falk is a stunning actor. Columbo still stands up as one of the best things ever made and it’s all to do with his performance.”

“I think it was “Year of the Family” and the BBC commissioned Roddy to write more or less anything he wanted” he recalls. “The Commitments and The Van were out, so Roddy was hot stuff. He wrote this story about a working-class Dublin family, telling the same story four times from a different point of view.

"It was brilliantly written. And brilliantly directed and produced — by Michael Winterbottom and Andrew Eaton. You couldn’t be working with better people and cast — Ger Ryan and Barry Ward and everyone. I think we knew we were involved in something very special.”

It created a stir in Ireland and England, and a different kind of stir in Irish arts to that of Riverdance which also exploded onto TV screens that year. McGinley says his life did change somewhat. Being in everybody’s living room obviously had more penetration than theatre and meant he was recognised more. “It doesn’t change the work but people’s perception of you change.”

The dangers of being typecast don’t worry McGinley. He doesn’t seek to play good or bad guys, but just tries to pursue good writing. “If it’s good quality writing, you tend to do it. Family was a no-brainer. It was just a brilliant piece of writing. Most stuff you read isn’t very high quality but when you see something like Family, you just think ‘this is absolute quality and I’d love to be involved’.”

McGinley last worked with Druid six years ago in The Empress of India by Stuart Carolyn, creator of the massively successful Irish gangland drama Love/Hate, which McGinley has worked on and also hugely admires.

“The writing, acting, directing and whole visual side of it is just brilliant, pure quality. I was lucky enough to have a little bit to do in it last year and the year before. I think it’s the best thing that’s ever been made in Ireland, certainly the best thing RTÉ has ever done.”

Theatre and screen have different challenges and rewards and McGinley likes both, claiming the best thing about theatre is performing a complete story each night and interacting with the audience. In film/TV, the crew and other actors are the audience.

“You play to them, which is great. And if something brilliant happens during a take, you’ve got it, whereas often the most brilliant things in theatre happen in rehearsal and you try to recreate it for it never to come back. But that’s the magic of it — it’s a transitory thing. Onstage, you have to push it out to the audience whereas on camera you don’t have to project as much — the camera finds you.”

Having appeared in numerous films, including Braveheart, The Butcher Boy, and The Wind That Shakes The Barley, McGinley has fondest memories of working with director John Boorman on The General and The Tiger’s Tail. “I had smallish parts in both but, as movie experiences, they stand out for me. They were very well written and you’re working with a master director who’s very well-prepared and encouraging.

He encourages people to metaphorically step off the cliff and take a chance, you know? And you always have the sense that if, you give of yourself and you’re honest and prepare as well as you can, he will have your back. As his body of work attests, he’s one of the greatest directors who has ever lived and it was an absolute privilege to be in his company.”

Music runs through the family, and he “loves” traditional Irish music. McGinley’s mother was a singer and taught piano. Her brother Paddy Boyle emigrated to London in the 1940s, where he raised a family of four, including renowned singer/musician Maggie and brother Kevin who plays with Le Chéile.

“I spent a summer in London in the mid-’70s working in a pub and used to go down to Wandsworth where the Le Chéile boys lived. We’d go to the White Hart in Fulham and the Hibernian Club where the likes of Raymond Roland, Roger Sherlock, Danny Meehan, Seamus Tansey, Kevin Taylor, and Sean O’Shea played — and my cousins Maggie and Kevin.

"There were amazing people around and an amazing spirit in the music that I never forgot. I’ve very fond memories of London. I’ve worked there too, in The Royal Court and National, and toured with the Abbey and Druid.”

The actor’s life is a transitory one but McGinley is stoical.

“I count myself lucky to be asked every now and then to work on projects that have value. Being freelance, you never know too far in advance what you’ll be doing and it’s a bit scary but kind of invigorating too. It energises you, keeps you on your toes. I can’t complain really.”