Síomha: familiar sounds in a modern format for debut album

Síomha, from Ennis, who's debut album 'Infinite Space' is released this Friday.

COMBINING ELEMENTS of folk, jazz and neo-soul in her debut album Infinite Space, Irish singer Síomha is set to be a rising voice in the Irish music scene. Here, she speaks to the Irish Post about her various musical influences, the process of creating her album and the importance of hearing the Irish language in new musical genres.

Growing up in Ennis, Co Clare, will naturally bring with it a strong association with traditional Irish music. With an annual trad festival taking place in the twelfth largest town in Ireland each year, Síomha Brock says its influence was always a part of her home growing up.

"Ennis is known as the trad capital of Ireland," she says. "There was always music in our house growing up, but dad was interested in all kinds of music so we were exposed to a lot of music from all over the world. He's a huge jazz fan, but there was also African music and folk music."

These various influences are apparent in Síomha's debut album Infinite Space, released this week. Eleven tracks in both English and Irish are laced with elements of pop, jazz and folk, creating a sound that brings combines the traditional with the modern.

Growing up in the West of Ireland, her first introduction to the stage was in a Gaelscoil where music and song were revered. Síomha picked up the guitar at age 10 and began to find her own voice through songwriting soon after.

"I got into the Beatles when I was about ten, and I just became obsessed with them," she laughs. "You couldn't talk to me about any other kind of music and I was convinced that they were the best musicians on the planet.

"I loved them for their music and I also loved to read about the background to their music, which was one of my favourite things to do. I'd go to Charlie Byrne's and get as many second hand books about them as I could."

She originally learned the piano and classical flute and violin, but the informal nature of learning the guitar appealed to her more than any other instrument.

"It was a much more relaxed way of learning an instrument because I had gone through the grade system with the others ones and it just didn't suit me," she explains. "I was able to learn the guitar on my own terms. I learnt every Beatles song going and went through all those phases that teenagers go through, punk and Nirvana and the likes.

However, it was when she turned 16 that Síomha found herself drawn to jazz vocalists like Ella Fitzgerald, Billy Holiday and Frank Sinatra.

"I really started to take note of their style and phrasing, and how they were nearly able to stretch their voices to sound like an instrument."

She spent a year in school in France where she learned the jazz guitar from a local Italian gypsy who played the local pubs, an experience she describes as "interesting."

"He had broken English and I had very little French, and he spoke Italian and broken French, so we were really trying to communicate through music as much as we could."

The usual stint of pub circuits for any aspiring Irish performer was also a part of her musical journey.

"I had a lot of late night and long gigs, so I learnt a lot from that experience," she says. "I had to keep myself and everybody else interested, so it kept me on my toes learning new songs and new arrangements for songs.

"It was just me, the acoustic guitar and a young drummer that I was playing with, so we were very different to a usual covers band which kept it fresh. We were able to be a bit different and versatile, even though it was a hard slog being just the two of us." 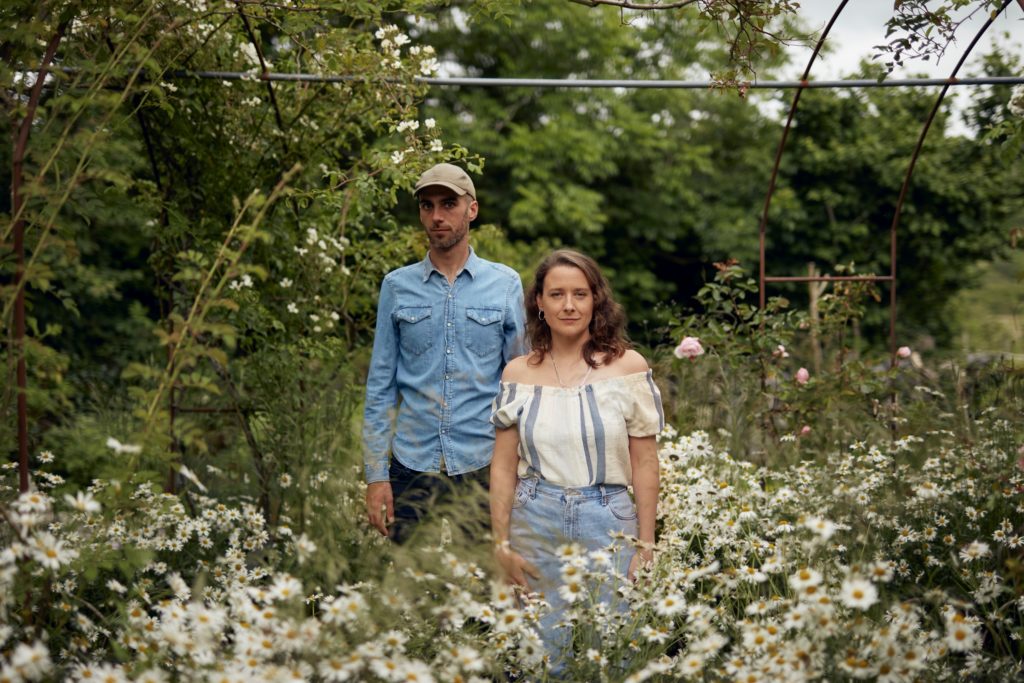 Síomha spent some time back and forth from London before moving to Canada in 2014, a place where she naturally took a break from music.

"I went over there with the idea that I was going to do music. I knew a musician from Tipperary that was over there who had given me a heads up that there really wasn't a music scene in Canada, or at least Vancouver. I thought that was strange and that it couldn't really be true, but she was right.

"They have a very poor local music scene in Canada because of their liquor laws, and so its very different to Ireland. You can see all the major touring bands coming to Vancouver in the large venues, but with small venues they have very little going on. There are various tiers of licenses and with the baseline license you actually can't stand up while having a drink. You're not allowed walk to the bar to order a drink, so it's more old-school table service. A part of that means there's no dancing."

Such limitations saw her take a break from music.

"It gave me a nice opportunity to slow down and have a reflection on music and why I wanted to do it, and at the end of the two years then I decided to come back.

"I was familiar with Ireland and I knew the scene here and I had already released some of my own music before going to Canada. So I thought I'd come back and give it a good go. We have an amazing music scene in Ireland so I felt like it was the right thing for me to do at the time."

Upon returning to Ireland, Síomha met producer Tyler Duncan from the band the olllam, who, although being a Detroit native, has extensive knowledge of the uilleann pipes and Irish traditional music.

"By the time he was 15 or 16 he was coming to Ireland to compete in the All-Ireland Fleadhs and he won several of them, and he's the only American to win the title on the bódhran," Síomha says. "He's been coming to Ireland for years and he has this understanding of Irish culture without necessarily having the heritage. That meeting of the language and the contemporary sound worked really well as a result."

It's that understanding which Síomha says made their partnership work for the creation of Infinite Space.

"I had never thought about making a record until I had met Tyler, and I suppose I was waiting on the right person to come along. I worked closely with Martin Atkinson, and he's my co-creator on this whole project.

"We had some songs already written and Tyler suggested and encouraged us to go into a writing mode for about three months at the beginning of 2019, which is what happened."

During this writing period, the majority of the songs on the record were written, with the recording of the album treated liked an office job in 2019.

"Martin and I travelled to Ann Arbour (Michigan, where Tyler's studio is located) and for three months straight we did eight-hour work days six days a week. There weren't really any late nights in the studio, but for the most part we acted as if it was an office job.

"The band joined us for six days we would just play them the voice memos and then we would tell them our ideas for patterns and sounds, and after that we just let the magic happen in the room."

The trio were also ahead of the curve when it came to virtually collaborating over for the fine-tuning of the album. They were largely unaffected by the pandemic, as the production was carried out through Zoom.

"Martin was in Limerick, I was in Clare and Tyler was in Michigan. Everything was basically recorded at the point and we then we were deciding what works and fits together. The pandemic did slow us down a little bit, but overall the process took as long as we expected it to."

The overall concept of the album is a collective 'oneness'; that everyone and everything in the universe is the same in a lot of ways. Themes of nature, beginnings and endings are heard throughout, with the album's musical landscape painted by strings, worlds of percussion, horns, rich choral arrangements and a rhythm section rooted in groove. 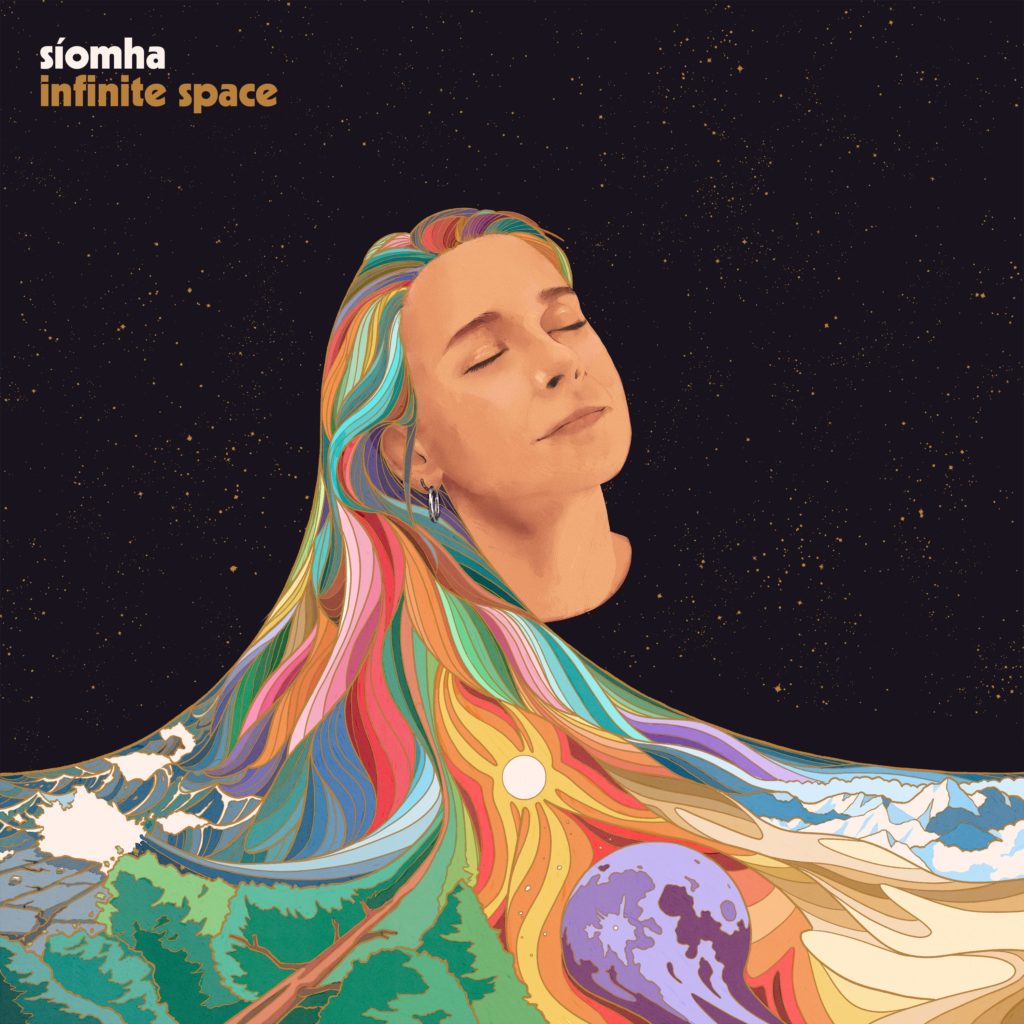 Artwork for Infinite Space, the debut album from Síomha.

Several of the songs are through the medium of Irish, which Síomha felt were important to put on the album.

"They are actually songs I wrote in English and they were translated into Irish by Billy McGlynn," she says. "Those songs were already in some of my sets and when I sang them in Irish, people in the audiences would suddenly come alive nearly. I would ask them after if they would like to hear the Irish or English version and they alway said replied with the Irish version. These were audiences that were not Gaeilgóirí, and they still said that, so I stopped singing them in English.

"Tyler was always very encouraging of getting those tracks in Irish on the record, even though he has no idea what was being said in the lyrics. They're so different and I don't think the Irish language has been used in a modern and slightly American-influenced sound before."

Síomha believes there is a resurgence occurring in the Irish language scene across all forms of entertainment.

"There's definitely a revival happening, in music, film and spoken word in general. Kneecap for example, poets like Ciara Ní Aodh who works in Engish and Irish in her work. There is a small and growing group of people who are committed to it and committed to using it.

"On the other hand then there is a difficulty in trying to present these things to non-Irish speaking Irish people. A lot of people are almost afraid of it, don't speak it, didn't like it in school, they blame their teacher for their lack of speaking Irish. There's also nearly an attitude with radio stations that Raidio na Gaeltachta will deal with Irish language music, instead of having Irish language on the 2fm or RTÉ Radio 1. They do play some, but in my opinion they should be playing a lot more, because a lot of people listen to foreign language music that is not Irish and they like it. In other countries I think I get a better reaction from audiences that aren't Irish when I sing in Irish, even through they haven't a clue about what's being said."

Síomha was lucky to be able to take her new music on a test tour last November, with the final date finishing on the night Ireland went back into lockdown.

"We did a couple of months preparation for that, and it was definitely a challenge for Martin and I to rethink this record that has a huge sound and to have to contain that to five people on stage. It was fun, and we put together an amazing band with a lot of rehearsals. Now that the record is coming out, we're totally ready for the tour."

Vinyls and CDs for Infinite Space are available to buy on www.siomhamusic.com/shop, with the albums also available to stream on all streaming platforms from Friday 22 April.