A MOVIE podcast by an Irish couple living in London has scooped the prize of best new podcast at the first-ever British Podcast Awards.

Dave Corkery and wife Cathy Cullen, originally from Co. Cork, have presented their podcast ‘The Cinemile’ for a year now.

The premise is simple, but ingenious – Dave and Cathy go to their local cinema in southwest London before recording themselves dissecting the film on the walk home.

Each episode has a 20-30 minute running time and features special guests, such as Cathy’s fan favourite Irish mammy Linda.

The Cinemile isn’t a huge production – it’s recorded whenever it suits the couple, it’s not promoted on iTunes and it takes Dave just 20 minutes to edit.

But a huge panel of podcast creators, publishers, press, listeners and audio industry execs chose them as winners for exactly that reason.

“I think they liked that our podcast shows how much you can do with so little,” said Dave.

“We don’t have the budget or the production quality really, we just have a recorder to record our walks home from the cinema and they loved that simplicity."

The idea behind The Cinemile came from Dave, who had wanted to record a podcast for years with wife Cathy, who wasn’t exactly keen.

“I wasn’t particularly keen at first, mainly because podcasts usually take a lot of work.

"But then Dave had his brainwave that we could just record ourselves walking back from the cinema and do it all live, and people have loved it,” Cathy explained. 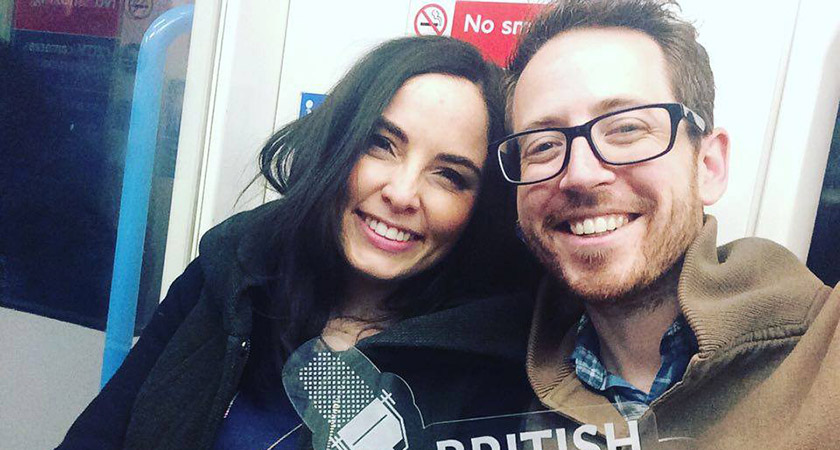 The couple, originally from Co. Cork, moved to London just under two years ago.

“I did one episode with him as a test a year ago, we reviewed The Jungle Book remake, and I found to my surprise that I actually quite enjoyed it.”

In the category of best new podcast, The Cinemile certainly had stiff competition to overcome in The Untold by BBC Radio 4, Everyone Else by Eva Krysiak. Say Why To Drugs by Distraction Pieces Network and Soundtracking with Edith Bowman by the eponymous Scottish radio presenter.

“We were extremely happy just to be nominated and to get to go to the ceremony. We thought Edith Bowman would probably win for her fantastic podcast, so when they called our names it was a bit scary to be honest,” said Dave.

“I had to push Cathy on stage pretty much. It was all very surreal.”

“I was probably the only sober person in the room,” said Cathy, who is five months pregnant with the couple’s first child. “But it was amazing to win and we’ve gotten so much exposure since.”

Plaudits are coming thick and fast. Competitor Edith Bowman took to Twitter right after The Cinemile’s win to congratulate Dave and Cathy and praise their “brilliant” podcast.

A new review by the Observer’s Miranda Sawyer describes The Cinemile as being “suffused with charm and insight”, while Chris Hewitt, news editor of Empire Magazine, tweeted: “Hadn't heard @thecinemile until it won Best New Podcast last night. Gave it a whirl this morning - great concept, great fun.”

“It’s probably the laziest podcast idea ever,” jokes Dave. “But it fits into our schedule perfectly and thankfully people like it.”

You can listen to The Cinemile here