CATHY Jordan has been fronting trad group Dervish for almost a quarter of a decade. Together, they have played to fans in hundreds of cities across 40 countries, including gigs at the Great Wall of China, the Wailing Wall in Jerusalem and at the biggest rock music festival in the world in Rio to 250,000 people.

In 2007, the band represented Ireland at the Eurovision Song Contest but came last. In 2012, Jordan released her debut solo album All The Way Home.

Born in Scramogue, Co. Roscommon, the youngest of seven children, Cathy had traditional music in her blood. Both her parents were singers, as were her siblings, who she was performing with from the age of three. A self-taught guitar, bodhran, bones and bouzouki player she joined Dervish in 1991 and has been on the road ever since, which is where we caught up with her…

In a car heading for the airport to catch a flight to Johannesburg for a couple of gigs with Dervish.

My parents for raising seven kids in a small house with no running water and still managing to be cheerful.

This one I reckon. We played all round the world from Rio to Istanbul, Vilnius to Anchorage, Tokyo to Glasgow. We played in every sort of venue imaginable, from cattle marts to castles, for everyone from farmers to world leaders. Life is good these days.

Bob Dylan, Blood On The Tracks.

The Glen in Sligo.

Feel the Fear and do it Anyway - by Susan Jeffers.

Watching my sister die from cancer. 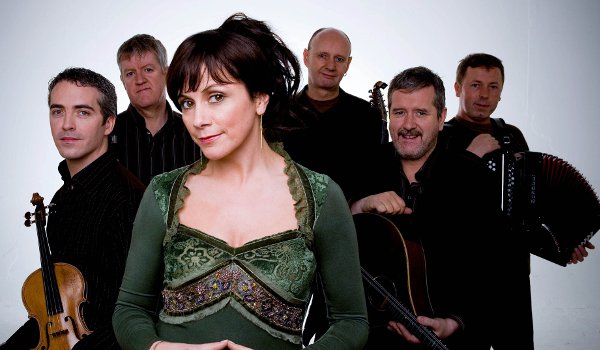 Cathy and the other members of Dervish

Which musical star should everyone know about?

My jeans, I just spilled coffee all over them.

If you haven’t a laugh you have nothing!

What is your favourite film?

Dangerous Liaisons. It is full of suspense, intrigue, deception, lust, envy and revenge. What more could you ask for? Plus brilliant performances from Glenn Close, John Malkovich, Uma Thurman and Michelle Pfeiffer.

For not being able to take a day off.

Where do you live and what’s the best thing about it?

I live in beautiful Sligo in the west of Ireland. It’s full of mountains, valleys, surf, sea, tombs and history.

And the worst thing about it?

The best and worst thing about Sligo is the weather. It rains a lot in the winter but in the summer it’s so fantastic, just take a look at the movie Calvary if you don’t believe me. Dervish play in one of the scenes too!

When to tell the truth would be unnecessarily hurtful.

I could tell you but then I’d have to kill you!