Like Matt Damon before him, who shopped at Supervalu and became a regular in a local café when he stayed in Dublin during Ireland's first lockdown, and like Patrick Dempsey who explored the Irish countryside and sported a traditional Aran jumper while filming a new Disney movie in Wicklow, Bill Murray is the latest American actor to fall in love with the Emerald Isle.

The Groundhog Day and Ghostbusters star-- among many more too numerous to name-- is in Ireland to film a new TV series around golf, and will showcase some of the country's most impressive golf courses.

Having started at the Druids Glen Gold Resort in Newtownmountkennedy in County Wicklow, Murray and his team will travel the length and breadth of the country, including a trip to Ballybunion, County Kerry, where former US President Bill Clinton once teed up-- and a statue of the Democrat still stands in the coastal town today.

Nothing will be Lost in Translation here. We couldn’t be more delighted to welcome the legendary Bill Murray and his family to Carne Golf Links today. He’s here filming an episode of Links Life with the greatest friend of Carne @coynewriter pic.twitter.com/c5LG9yftEM

Most recently, Bill Murray has been in County Mayo where he explored the Belmullet Golf Club, relaxed at the Talbot Hotel, posed for selfies with staff-- and chose a side for the upcoming All-Ireland Gaelic Football final.

In a photograph which has quickly gone viral on social media, Murray posed alongside staff at the Talbot Hotel, Belmullet, holding an absolutely enormous Mayo flag-- and although we can't know for sure, we think it's fairly likely the actor was bellowing 'Mayo for Sam!' at the same time. 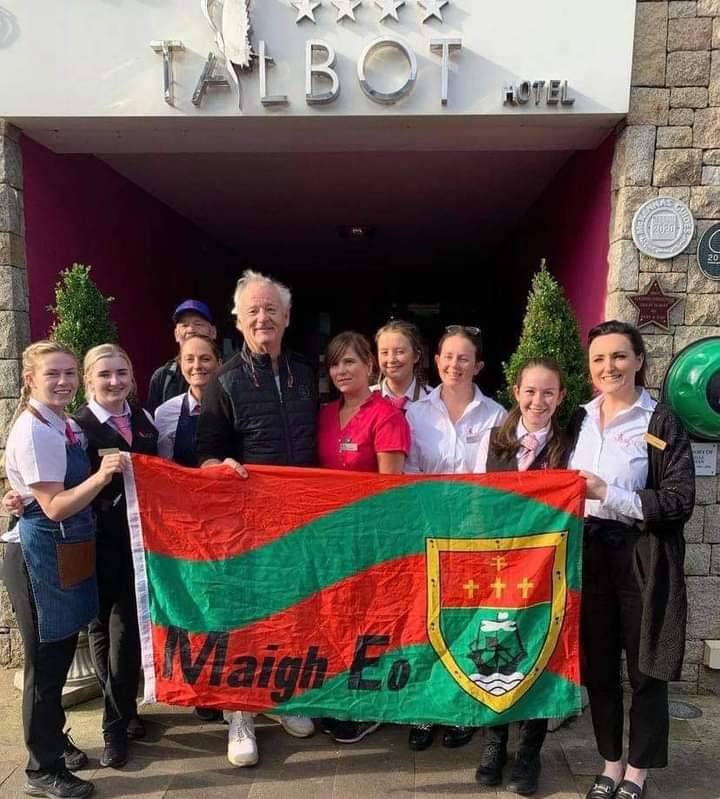 Murray for Sam: Bill Murray poses with a Mayo flag ahead of the All-Ireland final next month

One Twitter user from Galway was quick to point out that Murray starred in the film Groundhog Day, where one man lives the same day over and over again-- much like Mayo's attempts to claim the Sam Maguire cup, reaching the finals almost every year but always falling at the final hurdle.

Hopefully this year will be different, as Mayo have already beaten six-in-a-row winners Dublin-- but Mayo will have to face off against either Kerry or Tyrone in the September final, and Brazilian soccer legend Ronaldinho has firmly pledged his support for the Kingdom (no, seriously).

For now, Murray, along with Irish writer Tom Coyne, are continuing their trip across the Emerald Isle for the new golf series, The Links Life.