NATHAN CARTER has just played London's Palladium as part of his Stayin' Up All Night tour.

It's a far cry from how it started a decade ago when Carter left school to follow his dreams of becoming a singer.

Then, aged just 16 and living with his mum and dad, the teenager took gigs where he could find them - in nursing homes, at pensioners' lunches and everywhere in between.

But that all changed in 2012 when his version of the Bob Dylan track Wagon Wheel launched him onto the Country music scene where he's been performing on stage every week since, having racked up over a million hits on YouTube.

This Liverpool lad has come a long way in the last 10 years.

With three number one albums and two number one singles in the Irish charts, his last album Beautiful Life went four times platinum.

There are hopes the latest, Stayin' Up All Night, will do ever better.

"I just always knew that if I could and if I had the chance to make music my career that that was the road I was going to go," he says.

"For a long time it didn't work, and when I say a long time maybe three or four years, I was trying to play in pubs and clubs but it wasn't really making any financial sense. I wasn't that busy."

"It was pretty tough," he adds. "But I think the goal outweighs the negativity. I was always striving to be better, play better venues. So that outweighed everything." 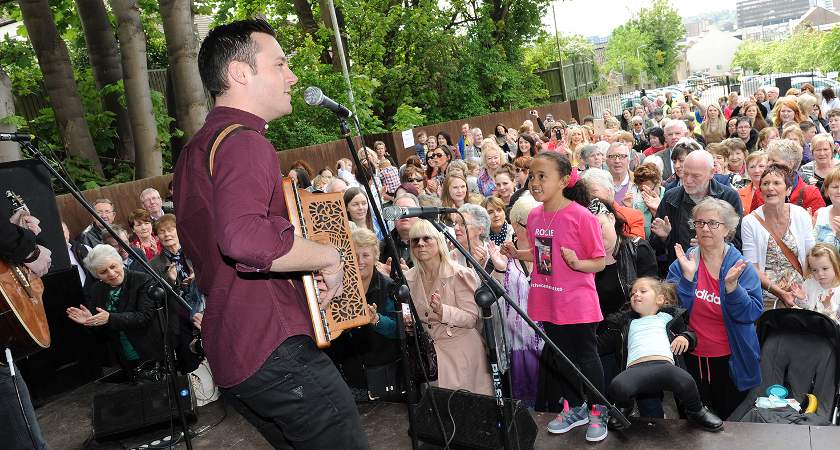 Growing up in a Liverpool Irish home, Carter was surrounded by the sounds of Ireland's folk, showband and traditional musicians, not to mention the greats of American Country like Johnny Cash and Dolly Parton.

But it was another, equally tenacious and life-affirming woman, that has been as big an influence on his career to date - Nathan's 76-year-old nan Ann McCoy.

Originally from Co. Down, she was among the first to see and nurture his talent and has spent the last couple of months touring Britain with her grandson.

"She's last to bed every night," Carter jokes. "I was very lucky, my family have always been very supportive. My nan actually convinced my mam and dad to let me leave school.

"She said that she would drive me to the gigs, so she actually became my sort of roadie if you like," he adds laughing.

"She actually still tours with us now. She was on tour in the UK with us for the last two months, living on the tour bus." 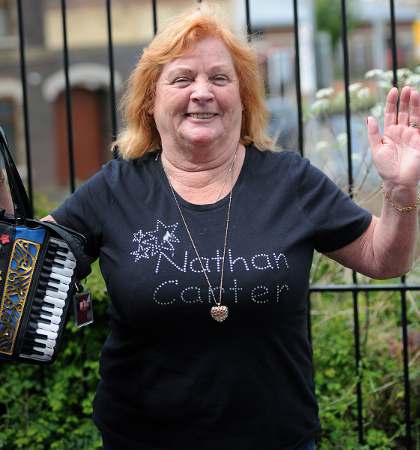 Not only did his grandmother encourage him to chase a singing career, but her record collection was also a constant source of inspiration to a young Nathan.

"I was surrounded by Country music growing up, the likes of Johnny Cash, Dolly Parton, Merle Haggard, my nan and granddad are big Country music fans," Nathan says.

"As well as that I used to be taken to the Liverpool Irish Centre every weekend to see all the showbands, the folk bands - Johnny McEvoy to the Dubliners to Joe Dolan, Philomena Begley, all those kind of people.

"So I was surrounded by a lot of influences growing up for sure. I try use that now, put that in the music."

"I was very much involved in the Irish community growing up," he adds. "I was involved in the traditional music. I was in the Liverpool céilí bands for five or six years. I used to compete in the Fleadh Cheoils every year, involving Comhaltas.

"I left school at 16 and started gigging in all the pubs, the Irish pubs and clubs and it just sort of took off from there. I've always been gigging."

Carter describes his latest album Stayin' Up All Night as somewhat of a departure from previous efforts but one he hopes the fans will approve of.

"The last three albums in Ireland have gone number one, so there's kind of a little bit of pressure to make this one as well, so really hoping that will happen," he says.

"It's kind of different this album in the fact that I've co-written eight of the songs, so there's a lot of my stories and my ideas in the songs.

"I would have recorded a lot of covers before. This album is more, I wouldn't say modern, but more radio friendly. It's the album I'm most proud of."

Whatever about the radio stations, Cater's fans - the more ardent of his admirers dubbing themselves The Carterettes on social media - are sure to approve. 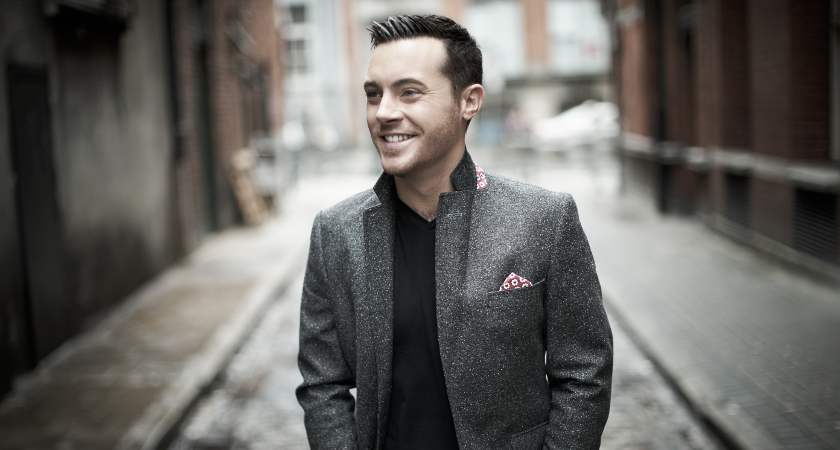 There's a song, Thank You, specially dedicated to his loyal followers, while the cheekily titled Skinny Dippin' promises to show more than they've ever seen of their clean-cut Country boy.

"I don't know if they want to see me like that," the singer jokes. "I've never tried it but I'm hoping to do a video...there has to be a video with that song. I'm going to maybe attempt that this summer and get a good few people involved."

Skinny dipping aside, you're more likely to find Carter indulging his love of the water in other ways.

"I live in Fermanagh, in Enniskillen," he says. "Not that I'm there much, I'm normally on the road most of the time. I love living in Ireland, I really do. I've been there the last eight years and it's kind of like home now.

"I own a little boat and I go on Lough Erne all the time,' he adds. "I'm keen into skiing and bodyboarding and wakeboarding. I love being in Fermanagh and try to get back as much as I can." 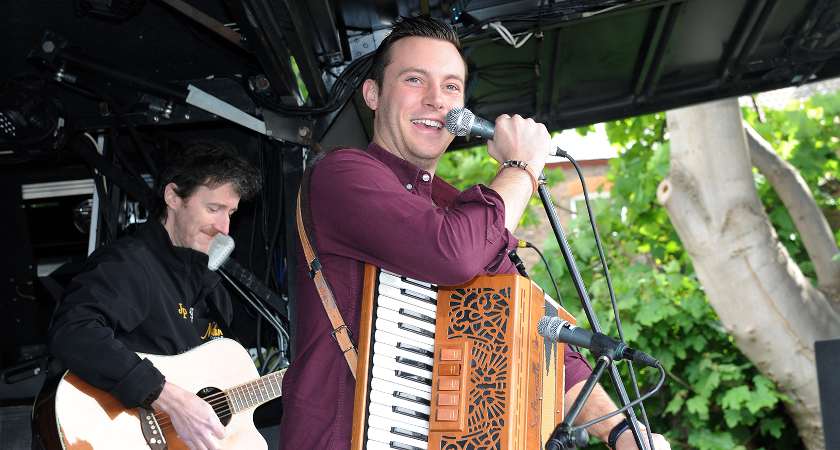 Liverpool lad Nathan grew up in the city's Irish community

The 13-track album finishes with Thank You.

"That's mainly dedicated to the fans," he says."I wanted a song that I could sing to show my appreciation to all the people who supported me through thick and thin, travelled, bought CDs, the tickets, bought everything, so I wrote that with the fans in mind. To me it's kind of a very personal song on the album. I know, hopefully, the fans will like it.

"I'm very lucky, I've got a great fan base," he adds. "It's something I've worked on over the last six, seven years, building up that fan base and trying to keep them happy. They seem to really love the music, they seem to really know how to enjoy themselves. And they're very lively, put it that way."

And of course Carter's home city could not fail to get a mention in the eponymous track Liverpool.

"I love Liverpool, I always have. The culture, the music, the football, everything about it, it's a great city," he says.

"I wrote that song about six months ago...to the music in Liverpool, the Beatles, Paul and John, and it touches on Hillsborough..."

Last month a two-year inquest concluded that South Yorkshire Police and Ambulance Service had contributed to the crowd-crushing tragedy that led to 96 deaths and 766 injuries at the FA Cup semi-final at Hillsborough Stadium in 1989.

"I was so pleased for the families, to see the relief on their faces, that they could actually put to rest the low points after all this time. It's gone on so long," Carter says.

"I was on The Late Late Show and I sang that song and did a tribute to the 96, so that song to me is probably my favourite song on the album." 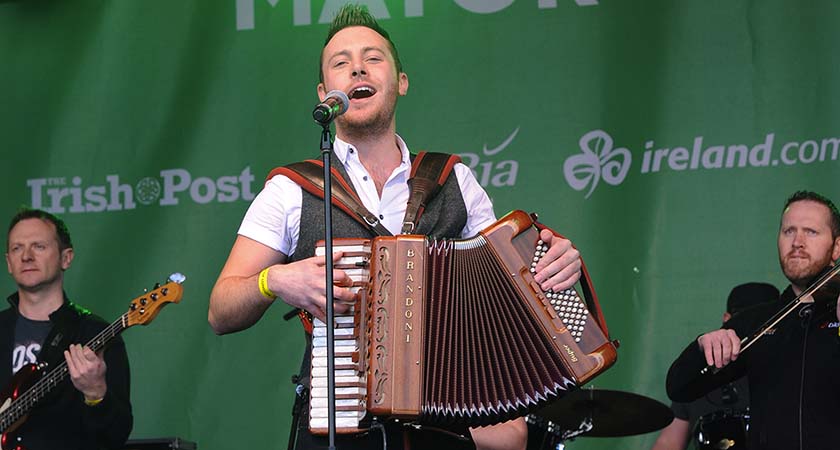 The album and tour title, Stayin' Up All Night, is not so much a nod to Carter's rock 'n' roll lifestyle as it is to a commitment to his music...although he does like to let his hair down when the job's done.

"Generally we would be up till the very early hours of the morning after a gig, so it is very fitting," he says of the record's title. "I work very hard and then I play hard when I'm off."

Carter has just turned 26 (his birthday's May 28 if you fancy sending a card next year) but not even that tempted him to go too crazy.

"That night I actually won't be partying because I'm playing the London Palladium the next day so I'll have to be taking it a bit easy, maybe celebrate after," he said ahead of the day itself.

But it should not come as a surprise to anyone to see Nathan Carter celebrate further success in the years to come or, for that matter, top his triumph to date.

"I would say probably my most enjoyable gig was last year, we performed at the Marquee in Cork," he says when asked to recall one of his favourite moments over the last 10 years.

"I actually recorded that gig as a live show. The week before Lionel Richie was there, the night after Bob Dylan was in that place so it was kind of...very surreal for me to be playing a venue with that sort of line up."